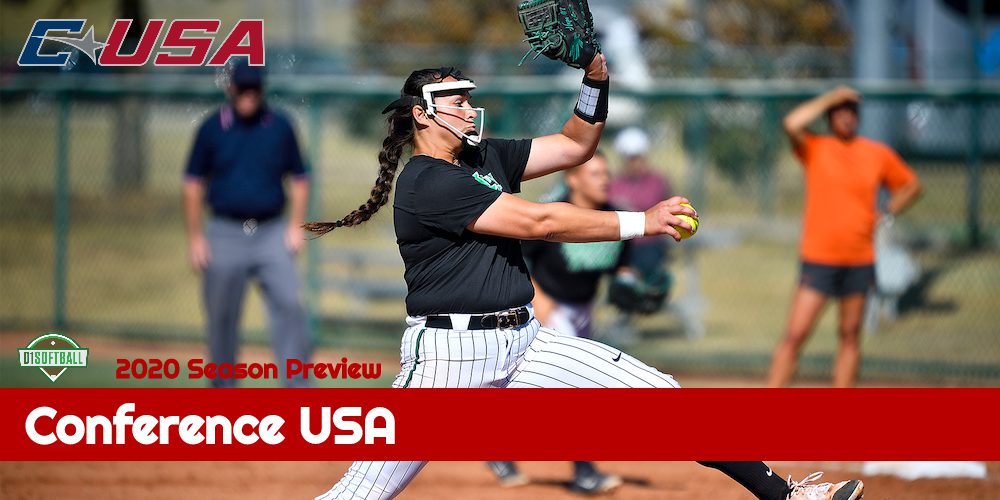 UNT looks to build off last season’s success with an experienced squad described by Coach Rodney Delong as “calm under pressure”. The Mean Green is led by a large senior class and First Team All-Conference USA honoree Hope Trautwein, our Preseason C-USA Pitcher of the Year. In her sophomore campaign, the righthander shouldered the bulk of the innings for North Texas, going 21-7, 2.82 with 169 strikeouts 71 walks. Joining her in the circle as starters are sophomore Bailey Tindell (6-9, 3.94, 91.1, 27- 14, 0) and freshman Ariel Thompson, who will also hit for UNT. The Mean Green has two closers listed on their roster in senior Lauren Craine and freshman Kailyn Berry. Not to be overlooked is Craine, who’s eager to get back in the circle after missing the last two seasons due to injury.

The Mean Green brings back a veteran defense with five seniors starting in the field, including Katie Clark (CF), Nicole Ochotnicki (C), Lacy Gregory (2B), Kenzie Young (LF) and Hanna Rebar (RF). Delong is entrusting the left side of the infield to two incoming freshmen, Candain Callahan (SS) and U19 Mexican National Team member Saleen Donohoe (3B).

UNT’s offense returns three players who hit .300 or better including Clark, an All-Conference USA First Team selection. The speedy lefty, who hit .404 last season with 15 stolen bases, is joined by Gregory, who went .319 with five home runs and 43 RBIs, and Evans who was a .331 hitter with 5 home runs and 29 RBIs.

UNT faces a tough non-conference schedule that includes Louisiana, Texas, Northwestern, and a three-game series with Oklahoma. The Mean Green open the 2020 season at the McNeese State Tournament against Prairie View A&M and faces Team USA on April 21 at the Texas Airhogs Stadium in Grand Prairie, Texas.

In 2019, WKU set the program’s winning percentage record with a 37-13 (.740) mark. The Hilltoppers clinched the Conference USA East Division title, only to fall short in the first round of the conference tournament in a 1-0 loss to Middle Tennessee. Entering her seventh season with the program, Amy Tudor states her 2020 squad doesn’t have just one leader, rather a collective group of leaders who are able to take on different roles. This leadership is best exemplified in the circle as the Hilltoppers return their entire pitching staff.  Senior Kelsey Alkey, the high velocity fan favorite, is back with Shelby Nunn who throws a heavy down ball. New additions in the circle include Katie Gardner, Warren East standout, who was previously committed to UT Martin, and freshman lefthander Madeline Harris.

WKU loses two all-conference selections in the outfield but look to the unconventional left-handed second baseman, Jordan Thomas and shortstop Morgan McElroy to provide strength up the middle. Freshman Taylor Sanders is slated to hold down the hot corner for the Hilltoppers with another freshman, Madeline Rider, getting the nod at first base.

Western Kentucky opens the 2020 season against Lipscomb in the Troy Classic with a notable midweek game at home against Kentucky.

The C-USA champions won 45 games last season and snagged three of the five conference awards including Player of the Year, Jazlyn Crowder, Freshman of the Year Lindsay Edwards and Co-Coach of the Year Mark Montgomery. However, Crowder graduated, and Montgomery has since moved on to Maryland. He was replaced by Maria Winn-Ratliff, a well-respected recruiter with loads of experience at the junior college level.

Tech enters the 2020 campaign with four arms in the rotation. All-Conference selections Jenny Chapman and Hannah Koenig both return for the Lady Techsters and are joined by newcomers Bre Hernandez (Temple College) and Audrey Pickett (Tyler JC).

With big shoes to fill in Crowder and Morgan, the Bulldogs will look to Edwards and Kimmie Atienza atop the lineup to spark the offense. Sloane Stewartson will provide some punch in the middle of the lineup. The four-hole hitter is coming off a late season ACL injury, but you wouldn’t notice as she returned in the best shape of her college career.

Tech opens up at the Big Easy Classic in New Orleans with an opening weekend matchup against Texas Tech.

The Herd enters the 2020 season with an explosive offense led by Mya Stevenson, who posted a .329 average with 20 home runs, 58 RBIs and is the first Marshall player to hit for the cycle. The Herd returns a senior-led infield with Haleigh Christopher (C), Blakely Burch (3B), a Sierra Huerta (SS), joined by juniors Armani Brown (2B) and Aly Harrell (1B).  Harrell led the nation in walks with 68 and had the most combined walks with 85 (17 HPB).

Losing Abagail Tolbert in the circle will be the biggest challenge for Marshall with senior Kailee Williamson required to step in and take control of the mound. Two transfers join the staff — Laney Jones from Ashland University and Megan Staffer from Monmouth, who last pitched in 2018. Freshmen Ashley Blessin and Delaney Heaberlin round out the staff for the Herd.

The Herd open up their season against Saint Francis University.