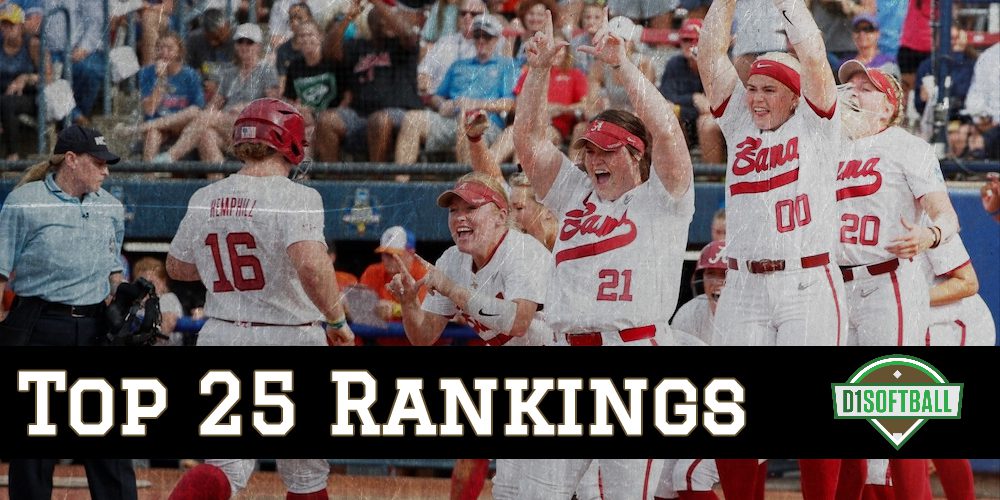 A new era is here with the launch of D1Softball, and Alabama comes in at No. 1 in the inaugural D1Softball Top 25 Rankings.

The Tide reached the Women’s College World Series for the 12th time last season and return 13 players from the 2019 roster. The defending SEC champs are atop the rankings due in part to an experienced squad with loads of depth in the circle.

Washington enters the 2020 season ranked in the No. 2 slot just above high-powered Arizona and defending national champion UCLA, which comes in at No. 4. Oklahoma, last year’s national runner-up, slots in at No. 5 to round out the top five.

Texas, which was eliminated by Alabama in the Super Regional round last season, checks in at No. 6, followed by No. 7 Minnesota. Rounding out the top ten are Louisiana at No. 8, No. 9 Florida and No. 10 Florida State.

The final WCWS participant from last season, Oklahoma State, checks in at No. 12 just behind No. 11 LSU.

The SEC leads all conferences with ten teams in the Top 25. The Pac-12 is next with five teams, followed by the Big Ten and Big 12 with four. The ACC and Sun Belt each have one team in the rankings.

The D1Softball Top 25 rankings are compiled by polling 10 sportswriters, broadcasters, analysts and coaches from across the nation, and are headlined by lead writers Rhiannon Potkey and Tara Henry.

The D1Softball Podcast – Episode 1 with MJ Knighten, Head Coach for the University of San Diego