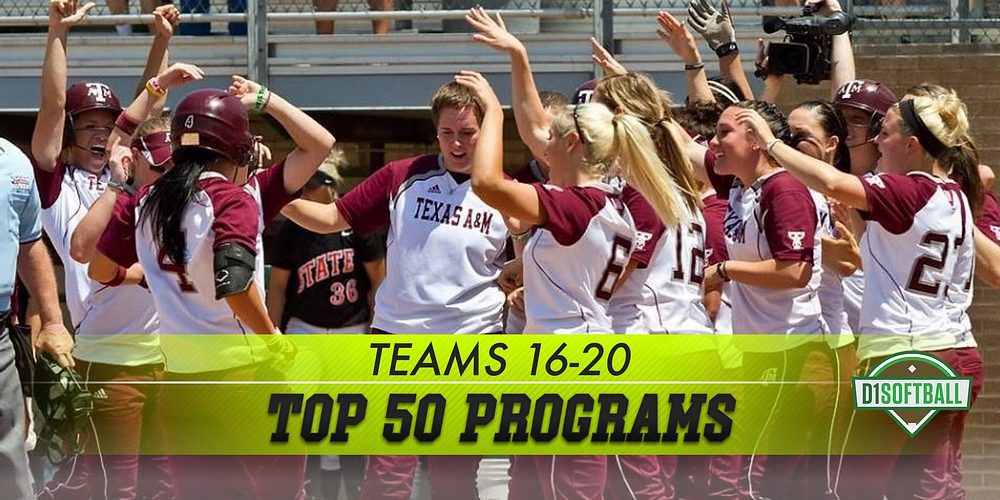 With rich tradition, Louisiana checks in at No. 16 on our Top 50 programs. Louisiana boasts 15 Sun Belt Titles since entering the conference back in 2000 (previously independent 1988-1999 under Yuvette Girouard) with an active streak of 21-straight seasons reaching 40-wins.

The Cajuns had at least one All-American in 27 of the last 31 seasons. Here are a few players to note in the past decade:

With three different skippers in the last decade, overcoming adversity has been a common theme at Auburn. The Tigers have maintained success on the field despite off-field incidents, including the abrupt retirement of former head coach Clint Myers back in 2017.

Under Myers, the Tigers made back-to-back (2015 & 2016) WCWS appearances, reaching OKC for the first time in program history. Auburn amassed 58 wins in 2016 on the way to its second WCWS appearance. The No. 4 Tigers hosted a regional, defeating Jacksonville State in the finals, 14-2. After dropping Game 1 to Arizona in the Super Regionals, Auburn defeated the Wildcats twice to return to the WCWS. In OKC, the Tigers beat UCLA, Georgia, and Florida State, advancing to the WCWS Finals against Oklahoma. After dropping Game 1 against the Sooners, Auburn rebounded and won Game 2 in an extra-inning offensive back and forth contest with an 11-run second inning between both squads. The first team in program history to advance to the finals fell short in Game 3.

The Aggies check in at No. 18 just ahead of two other instate rivals due to consistency over time, advancing to the NCAA tournament 18-straight years. Add in a WCWS appearance in the last decade, Davis Diamond and legendary head coach Jo Evans and the Aggies beat out their in-state rivals.

The Board of Regents approved the construction of Davis Diamond, a $28.6 million facility, in April of 2016. The gates opened just two years later on April 27, 2018. The stadium holds 2,000 fans and includes club level seating, two luxury suites, a new locker room, a video room, a training room, an indoor hitting facility, and a new press box. The 6,744 sq. ft. indoor hitting facility includes four batting cages in addition to staff offices and locker rooms. The press box has two radio booths, a TV booth, and a writing press area.

Under Hall of Fame head coach Jo Evans, Texas A&M has advanced to the OKC three times, most recently in 2017. Evans led the Aggies to seven 40-win seasons over the last ten years, all without a conference championship. TAMU moved to the SEC in 2015. The thrilling 2017 WCWS run started Regionals. In a come from behind victory, the Aggies defeated No. Tennessee 6-5 to force game three in the Knoxville Super Regional. Gaining momentum from game two, Texas A&M beat the Vols, 5-3 to advance to its first WCWS since 2008. Trinity Harrington retired 13 of the last 14 batters to pick up the win for the Aggies. The 2017 roster was stacked, including Riley Sartain, Keeli Milligan, Kaitlyn Alderink, Ashley Walters, Samantha Show, Tori Vidales.

The Lady Bears have reached the WCWS four times under head coach Glenn Moore. In two decades at the helm, Moore has led the Bears to the WCWS quarterfinals (2017) and semifinals twice (2011 & 2014).

The 2011 Baylor squad owns with the best finish in program history. En route to OKC, Moore guided the No. 11 Bears to 3-0 record at the College Park Regional to advance to the supers. On the road for the second week in a row, Baylor faced the No. 6 Georgia Bulldogs in the Athens Super Regional, winning two out of three to advance to the WCWS. Drawing Oklahoma State in Round 1, the Bears defeated the Cowgirls in a tight 1-0 ballgame. Facing Alabama in the second round, Baylor fell to the Crimson Tide, 3-0, only to bounce back with a win over Missouri. The historic run came to an end with a 4-0 loss to eventual national champion Arizona State.

The 2017 squad posted the best home winning percentage in program. history with a 27-2 record, including a three-game sweep of the Waco Regional. The No. 15 Lady Bears faced off against the No. 2 Arizona Wildcats, dropping game one, 2-3. The Bears clawed back with two victories, 6-4 and 6-5, to advance to the WCWS. In front of 8,874 fans, Baylor took on No. 10 Oklahoma in Round 1 (6-3), the eventual national champions, and dropped their second game to the Oregon Ducks (7-4) on elimination Saturday.

Players to Note:
Whitney Canion (2009-2014), the all-time wins leader and all-time strikeout leader, picked up Big 12 Freshman of the Year battling an only to battle back and bookend her career as Big 12 Pitcher of the Year in 2009 and again in 2014. In 2018, as a senior, Jessie Scroggins broke the single-season batting average record, hitting .461 at the plate. Kyla Walker finished with a .433 average, and Gia Rodoni (23-12) ended the season with 268 strikeouts, fifth-most in a single season.

Connie Clark and Cat Osterman are two names that come to mind when thinking about Texas Softball. Both tall dominating pitchers in their prime were pivotal to the success and growth of the Longhorn program. Clark, the only coach in Texas Softball history, resigned in 2018 giving way to Mike White, another premier pitching mind.

With 15 consecutive NCAA tournament appearances, the Longhorns have shown consistency over time but have struggled to reach the Super Regional round on many occasions.

With a 51-10 record, the 2013 Longhorns drew the No. 4 national seed, hosting the Austin Regional.  Texas defeated Army and South Carolina twice to win regionals and host Super Regionals versus Florida State. Behind the arm of Blaire Luna, the Longhorns defeated the Seminoles in two games, reaching OKC for the first time since 2006 and achieving their fifth berth to the WCWS. Luna was brilliant for Texas that season with a 32-7 record and 1.28 ERA and a whopping 422 strikeouts. Luna threw four no-hitters in the 2013 season with a career total of nine, including two perfect games. Luna ranks second behind Longhorn great Cat Osterman (20).  A pair of All-Americans — Taylor Hoagland and Taylor Thom — led the Longhorn offense in 2013. Hoagland posted a .424 average with 14 doubles, two triples, 14 home runs and 45 RBIs. Thom batted .382 with 16 doubles, 15 home runs and team leading 66 RBIs.

Miranda Elish: The two-way player had a breakout senior season, tallying a 11-3 record with a 1.25 ERA striking out 96 batters. Elish was just as impressive at the plate hitting .370 with seven doubles, four homers and 19 RBIs in just 23 games played.