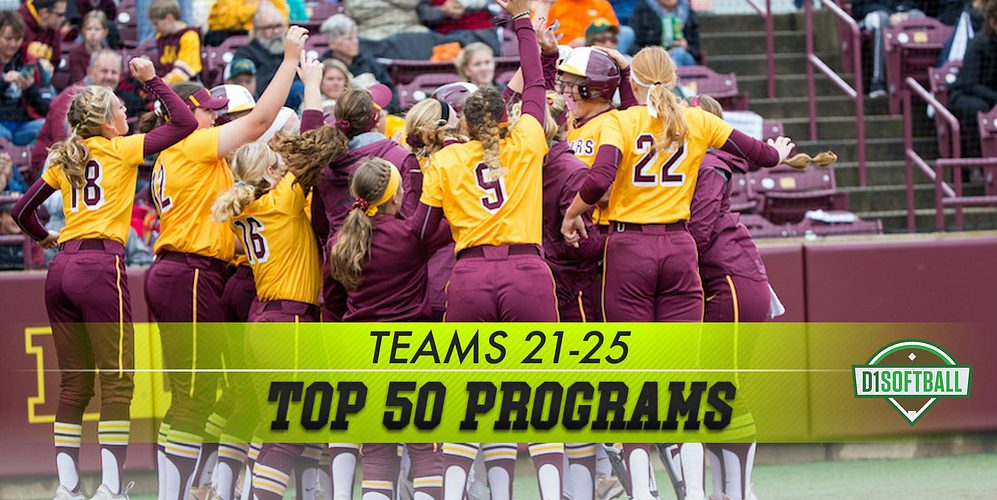 The Golden Gophers reached the postseason for the seventh straight year during their historic 2019 campaign.

However, when dissecting the last decade, we’ve got to give credit where credit is due: Jessica Allister.

Allister took over the program in 2011, going from a 16-37 (2010) record to 31-24 (2011), leading the Gophers back to the postseason in just two seasons at the helm. The 2014 Gophers won the Big Ten Conference Tournament Championship and advanced to the first Super Regional in program history. Fast forward to 2017, the selection committee snubbed the No. 2 ranked Gophers, sending them to face the No. 16 seed Alabama Crimson Tide. This press conference is still one of my favorites of all time. (Gopher Softball: 2017 NCAA Tournament Press Conference)

So, Allister exits, and Jaime Trachsel enters and picks up right where she left off. In fact, Minnesota reached its first WCWS under Trachsel. Please note, there has been one constant throughout the decade: Piper Ritter. The newly tabbed skipper offers both experience and stability for the Gophers. Ritter has guided four of the top pitchers in Minnesota, including Briana Hassett, Sara Moulton, Sara Grownwegen, and Amber Fiser.

Under former head coach, Diane Ninemire, the Bears reached the postseason eight times from 2010-2019 with back to back WCWS appearances in 2011 & 2012.

Cal defeated a seeded Kentucky in Super regionals during the 2011 campaign. After losing a tight Game 1 in OKC to Alabama, the Bears bounced back to beat Oklahoma State, 6-2 and were eliminated by Florida. The 2012 squad returned to OKC, posting an overall record of 58-7, 21-3 Pac-12. The roster included some big-time names: Britt Vonk, Valerie Arioto, Jace Williams, and Jolene Henderson. Henderson earned Pac-12 Pitcher of the Year honors that season with posting a 0.71 ERA in 29.2 innings of work, going 4-0 with three shutouts in the Berkeley Regional.

The Cal Bears ooze tradition with 103 wins in the postseason, ranking fifth behind Washington (121), Oklahoma (125), Arizona (173), and UCLA (228).
However, the Bears are heading into a new era with the hiring of Chelsea Spencer. The former Cal All-American returns to Pac-12 after spending two seasons at Texas. Spencer coached the Oregon Ducks from (2013-2018).

Six straight West Coast Conference (WCC) championships and 15 consecutive NCAA Regional appearances placed BYU at No. 23 on our Top 50 programs of the decade.

With Gordon Eakin at the helm, the Cougars reached their first-ever NCAA Super Regional Appearance in 2010 after winning the Mountain West Conference with a 12-3 record. Led by junior hurler Paige Affleck (30-8), the Cougars clinched the MWC title with a 7-2 victory over Utah. BYU traveled to the Austin Regional, defeated East Carolina in Round 1 and No. 7 seed Texas in the second round of the regional. The Cougars defeated East Carolina for a second time, 8-3, to advance to the Tucson Super Regional against Arizona.

Players to Note: Delaney Willard first-team All-American and WAC Player of the Year and was the only player in the nation ranked in the top-25 in nine different national batting categories. Willard led the team in multiple categories in her senior campaign (2012), including average (.418), doubles (17), home runs (18), and RBIs (88).

In just her third season at the helm, Loren LaPorte led JMU to an overall 51-10 record and 20-1 CAA mark. The 2019 Dukes upset No. 15 seed Michigan in the Ann Arbor Regional, beating the Wolverines twice to advance to Supers. JMU fell to eventual WCWS champions, UCLA, at the Los Angeles Super Regional.

Gumpf, the third head coach in Notre Dame history, led the Fighting Irish to back to back Big East conference titles in 2010 and 2011. Since moving to the a power five conference (ACC) in 2014, Notre Dame retained their winning record. With ten straight regional appearances, the Irish have been unlucky in postseason play, missing out on Super Regional appearances going 2-2 six times throughout the last decade.

Player to Note: Karley Wester tabbed USA Softball Player of the Year Finalist (2015) and ACC Freshman of the Year (2014) recorded a .422 career batting average. The run producing machine tallied 106 RBIs, 21 doubles, ten triples, six home runs during her career. In her junior campaign, she recorded a season-high 91 hits for a career total of 318 while at Notre Dame.