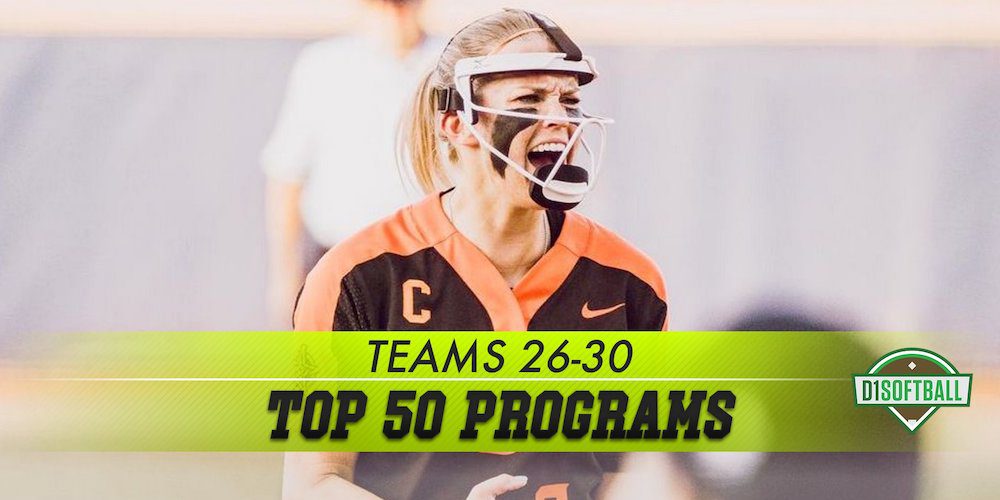 The Cowgirls started and ended the decade strong with two Women’s College World Series appearances in 2011 and 2019.

The 2019 squad was fun to watch. Described by Coach Kenny Gajewski as a ‘blue-collar’ team, the Cowgirls posted a 45-12 record, going 13-5 in conference play knocking out the defending national champion Florida State in Super Regionals to advance to the WCWS. Chyenne Factor led the offense in average (.388), just .001 above Madi Sue Montgomery (.337). But, the leader in multiple offensive and defensive categories is our bat flipping queen, Samantha Show. In her senior campaign, Show led OSU to the WCWS with a 22-10 record and 2.34 ERA in 200.1 IP. She was even more impressive at the plate with a .333 average, 12 doubles, 20 home runs, and a team-leading 56 RBIs.

Under former head coach Rich Weiligman (2007-2015), Oklahoma State reached the WCWS in 2011 for the first time since 1998. The Cowgirls’ road to OKC proved challenging, as the team traveled to the Knoxville Regional to face the No. 14 seed, Tennessee. OSU defeated the Vols twice to advance to the Super Regionals against Houston (upset No. 3 Texas). Kat Espinosa picked up the win in Game 1 in a 3-0 victory over the Cougars only to drop Game 2, 1-0. Senior Sarah Odom picked up the win in Game 3 (6-5) in a back and forth victory to advance to the WCWS.

After almost a quarter of a decade at the helm, hall of fame head coach Joyce Compton retired in 2010, giving way to current head coach Beverly Smith.

With 316 wins under her belt, Smith has led the Gamecocks to a program-record seven straight NCAA Tournament appearances from 2013-2019.

The Gamecocks recorded one of their most successful seasons in 2018, with an overall 49-17 mark, their best campaign since 1999. Leading the offense that year was sophomore Mackenzie Boesel, who posted a .360 average with 18 doubles, three triples, and 47 RBIs. That same season, South Carolina used the ‘pitching by committee’ tactic with a staff that included Cayla Drotar and Kelsey Oh. Carolina drew the No. 9 seed on Selection Sunday, hosting UNC Greensboro, Liberty, and Hofstra. Liberty upset the Gamecocks in round two, forcing them to come back and beat them twice in the finals, 2-0 and 5-0. South Carolina faced the No. 8 seed, Arizona State, in the Tempe Super Regional, falling twice to the Sun Devils.

The Rams advanced to the NCAA Tournament for the first time in 2010.

The program dates back to 1985, not recording a single winning season until former head coach Bridget Orchard took over in 2001. In her 17 seasons at the helm, Orchard turned Fordham into an Atlantic 10 powerhouse. Under her leadership, the Rams won six consecutive conference titles (2013-2018). Carrying on the tradition, current head coach Melissa Inouye, picked up the seventh consecutive Atlantic 10 Championship in 2019, earning A-10 Coach of the year honors in her first season as skipper.

The 2010 squad proved to be a special group. During the 2010 campaign, Fordham set 44 school records and finished the regular season on a 21-game winning streak. The Rams compiled an overall 49-12 record with ace, Jen Mineau in the circle. Mineau finished the season with a 34 wins, 1.04 ERA, 503 strikeouts in 282.1 innings. The sophomore righthander dominated conference play and tossed the first-ever Atlantic 10 Championship perfect game in a 1-0 victory over Charlotte.

The former D-II NCAA Champions (2000) qualified for the Division I tournament in their first year of eligibility (2009). The 2009 squad set the standard for subsequent NDSU teams compiling a Summit League tournament championship, regional championship (Norman) and a berth to Super Regionals (Tempe).

NDSU finished the 2019 season with an overall 42-16 (16-2) record, winning its sixth consecutive Summit League Tournament championship, having played in every championship game since becoming eligible. With an automatic tournament berth, the Bison traveled to the Minneapolis Regional to face No. 7, Minnesota, led by Trachsel. Amber Fiser struck out 12 NDSU hitters and throwing her ninth shutout of the season.

Under first-year head coach Holly Aprile, the 2019 Cards tallied a 35-23 overall record, going 12-12 in conference play. Aprile, the former Pittsburgh head coach (2009-2018) and 2018 ACC Coach of the Year, led Louisville to the NCAA tournament in her first season. The Cards drew an at-large bid in 2019, making it to the finals of the Evanston Regional.

In her second season as skipper, the 2020 squad beat No. 10 Oregon 4-3 and played two tight games against Oklahoma State, dropping an extra-inning thriller to the Cowgirls, 1-2.

Keep an eye on Louisville. The Cards are on the brink of making their first super regional appearance in program history.