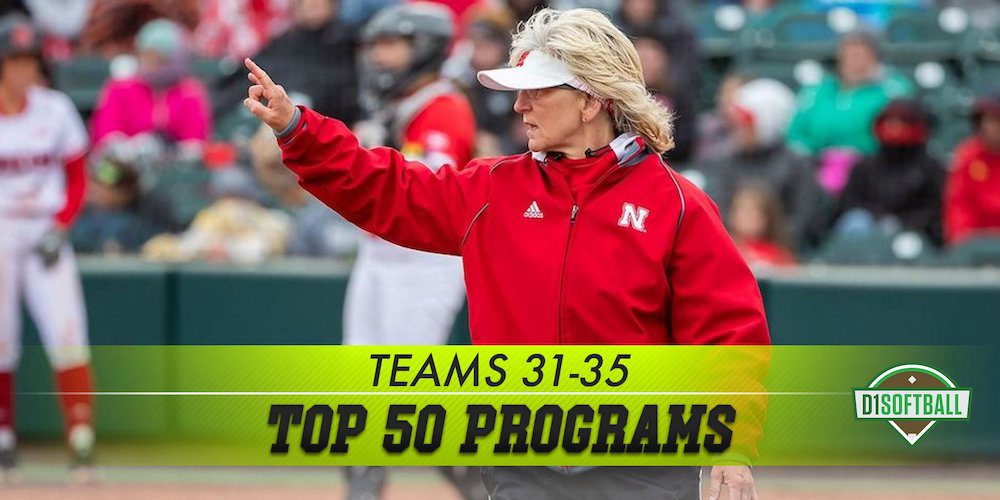 Nebraska softball enters its 46th year of competition, dating back to its first season in 1976. Not only have the Huskers produced numerous All-Americans, they also lead Division I softball in academic All-Americans with 30. Nebraska has it all with 19 conference titles (12 Big Eight, 6 Big 12, 1 Big Ten), a Honda Award Winner and head coach Rhonda Revelle. Looking at its storied history and accolades, one would argue they deserve a higher ranking. However, if we dig deeper into the last decade, there’s been a significant drop in performance from 2015-2019. With seven WCWS berths, the last being in 2013, the Huskers check in at No. 31 on our Top 50 Programs of the Decade list.

The 2013 squad included the Edwards twins — Taylor and Tatum. In their junior seasons, the pair helped lead the Huskers to the Super Regionals at No. 3 Oregon. Taylor hit .328 on the season, second on the team behind Alicia Armstrong (.346), with 14 doubles, 54 RBIs, and a team-leading 13 home runs. Tatum went 30-10 with a 1.19 ERA in 253.1 innings under the tutelage of former Husker and current Howard head coach, Tori Tyson. She also batted .286 with 11 doubles and 11 home runs.

Check out the 2013 Season Statistics here.

As a young program, the Rebels have found great success in the last decade with four tournament appearances in the previous four years, advancing to Supers Regional twice. Finding success with numerous head coaches shows there is some serious talent in Oxford. Hopefully new coach Jaime Trachsel will provide stability for Ole Miss. The former Gopher head coach boasts 18 years of coaching experience and hired just a month after the 2020 season was cut short by COVID-19.

Ole Miss relied heavily on Kaitlin Lee during its 2017 run. The junior righthander threw every pitch in the SEC Tournament with an overall 23-11 1.79 ERA, 118 strikeouts, in 249.2 innings pitched. Elantra Cox (.429) and Kylan Becker (.375) led the Rebel offense that year with a combined 41 stolen bases. The same season, Ole Miss hosted its first-ever regional in Oxford, defeating Southern Illinois and Arizona State and advanced to the Super Regionals. The Rebels traveled to No. 5 UCLA, losing an extra-inning battle in the bottom of the 11th in Game 1, 7-8, and a tight 1-0 ballgame in Game 2. The 2019 squad advanced to the Super Regionals for the second time in program history to fall to another Pac-12 school, Arizona.

The 2019 squad went 47-12, including a 20-game winning streak in the middle of conference play. Danielle Williams, the freshman phenom, tallied a 31-8 record with a 1.55 ERA, 317 strikeouts in 230 innings pitched. Williams kept opposing hitters to just a .163 average facing 875 batters and was named Third Team All-American and NFCA Freshman of the Year.

The Wildcats drew the No. 16 seed, hosting the Evanston regional with Louisville, Southern Illinois, and Detroit-Mercy. After dropping the second game to Louisville, 1-2, NU forced the cardinals to an if-game, beating them twice to advanced. The red hot squad faced the eventual runner-up, Oklahoma Sooners, in the Norman Super Regional. The Wildcats have two strong arms heading into the 2021 season with Williams and Kenna Wilkey, who participated in the inaugural season of the Florida Gulf Coast League (FGCL).

Tulsa, aka “Green Country,” is located 700 ft above sea level and sees 227 days of sunshine. Where do we sign up?

Head coach Crissy Strimple, just completed her first season at the helm, leading the Hurricanes to a 7-0 start in the shortened 2020 season. However, Strimple is no stranger to Tulsa as she spent 14 seasons with TU as both a player and a coach, including eight seasons as the associate head coach. Picking up two C-USA titles (2012, 2014) solidified NCAA tournament berths for the Hurricanes. The 2016 Tulsa squad picked up their first American Athletic Conference (AAC) Tournament Title with a 4-0 victory over No. 24 USF and their first AAC conference title in 2017. Tulsa has struggled to get out of a regional with an overall tournament record of 14-22. The hiring of Paige Parker, a two-time national champion, is a welcomed addition to the staff.

Georgina Corrick has been brilliant in the circle for South Florida, going 12-3 in the shortened season with a 1.29 ERA. Corrick checked in at No. 9 on our Top 100 Pitchers list, ranking high in all three categories: pitch ability, zone control and durability. Corrick is also a member of the British national team, along with teammate Lauren Evans. Both players competed for Great Britain in the 2019 Europe/Africa Olympic Qualifier, finishing second to Italy.

*extra year of eligibility because of NCAA health waiver