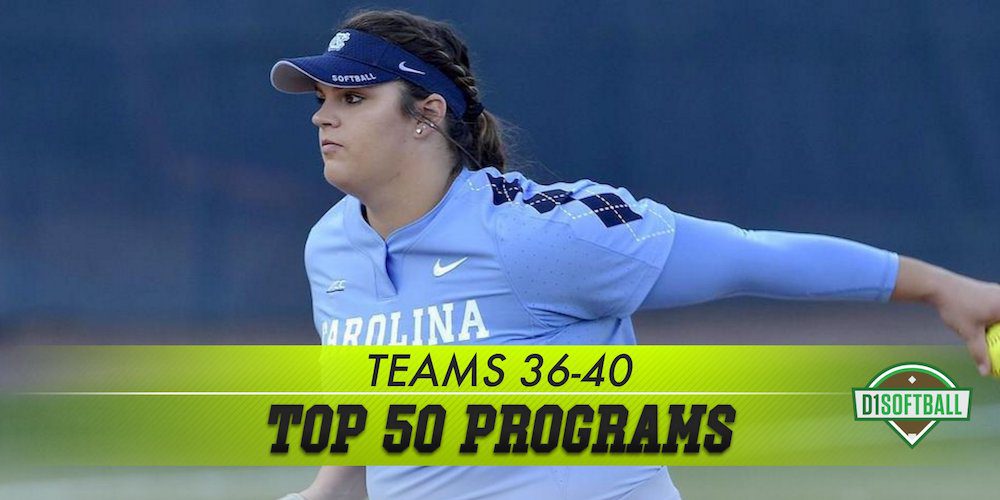 The 2017 season proved to be one of the most impressive squads for the Tar Heels. With a rookie lefthander on the mound, North Carolina amassed a 40-21 record. As a freshman, Brittany Pickett won 22 games for the Heels, racking up numerous accolades including ACC Freshman of the Year. Pickett holds the record for career saves (12) and is ranked in the top 10 of 10 UNC single-season records. Unfortunately, the three-time All-ACC selection suffered a season ending injury in the 2020 shortened season just after a brilliant performance against the No. 2 Alabama Crimson Tide. Luckily, Pickett will be back for the Tar Heels in 2021.

The Bulldogs have been quite impressive in one of nation’s premier conferences. Mississippi State has reached the NCAA tournament seven times in the last decade with help from former Oklahoma great, and current head coach Samantha Ricketts. Entering her second season at the helm, Ricketts has been an integral part of developing the Bulldog offense. Joining the staff as an assistant coach in 2015, Ricketts quickly climbed the coaching ranks being promoted to Associate Head Coach in 2019.

Talk about offense, the 2019 squad exhibited loads of firepower behind the bats of Fa Leilua and Mia Davidosn. Leilua finished the season with 22 home runs just behind Davidson’s 26 on the year. The team blasted 72 homers on the season, boasting a .484 slugging percentage. MSU continued its success, going 25-3 in the 2020 shortened season. The Bulldogs were on a 14-game winning streak when the season was abruptly ended, making them a solid contender for the 2021 season.

Inspiration: Read about the “Wall Sit Challenge” how the Bulldogs remember Alex Wilcox, a member of the 2018 squad.

With Courtney Deifel at the helm, the Razorbacks advanced to three-consecutive postseason appearances including a super regional run in 2018. For the first time in program history, the 2018 Razorbacks squad earned a NCAA national seed (No. 13) and hosted the Fayetteville Regional at Bogle Park. During that series, Arkansas drew the third largest crowd in program history (2,142) during the championship game against Wichita State. The Razorbacks advanced to the Super Regional in Norman, Okla., only to fall short of their first WCWS appearance to the Sooners.

Arguably one of the greatest selling points for Arkansas softball, Bogle Park is one of the finest facilities in the SEC, if not the nation. The park was unveiled in 2009, boasting a 4,000-plus square foot facility with a team lounge, locker rooms, training room, and offices. The seating features 1,200 chair-back seats, outfield berm (with space for large groups and grilling) and six suites overlooking the field.

With three-straight NCAA Tournament appearances, including back-to-back Super Regional appearances for the first time in program history (2016, 2017), the Utes check in at No. 39 on our All-Decade list. Utah moved to the Pac-12 back in 2012 after previously competing in the Mountain West Conference. In the 2020 shortened season, the Utes entered our D1Softball poll early in the season posting a 14-4 overall record. All of their losses were to ranked opponents (Texas, Tennessee, Oklahoma, Oklahoma State).

Most notable player: Hannah Flippen (2014-2017) earned back-to-back Pac-12 Player of the Year awards and was named Pac-12 Defensive Player of the year (first player to be named both). The current U.S. National Team member served on the Utes coaching staff as a graduate assistant (2018) and assistant coach (2019) before leaving to focus on the Olympics. The four-time Pac-12 honoree set records for runs (197), hits (263) and batting average (.392).

Despite outside distractions, the Blue Demons have reached the NCAA tournament the last three years for a total of seven times in the last decade. Under current head coach and former DePaul All-American, Tracie Adix-Zins, the 2019 squad won their third-consecutive Big East Tournament title. DePaul finished her first season with a 35-16 record.

The two-time All-American contributed to the success of the Blue Demons throughout her four-year career. The two-way player and Big East Rookie of the Year (2011) led DePaul with 43 RBIs, 11 home runs and 47 walks in her first season. During her senior campaign (2014), Verdun tied DePaul’s single-season record for wins (33) and set career pitching records for games started (145), strikeouts looking (224) and batters faced (3880). As a hitter she set the career batting record for walks (156).