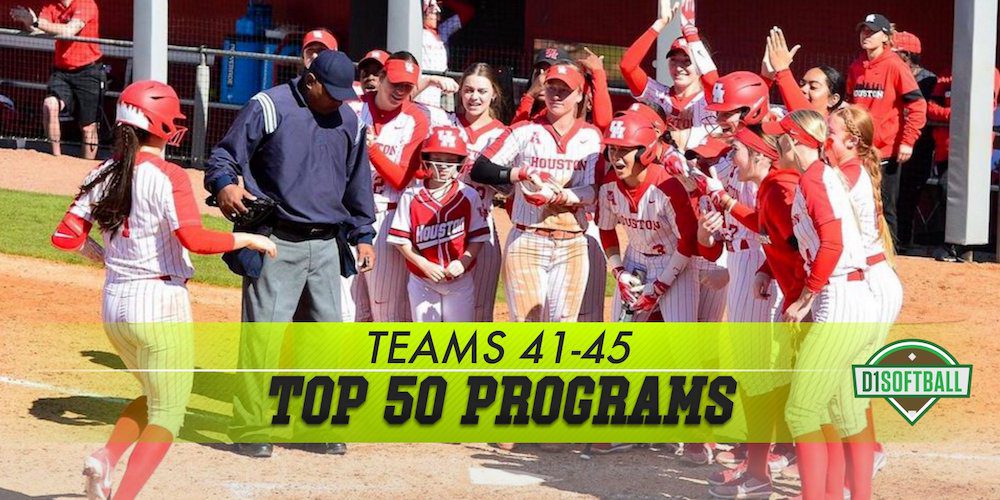 Kristin Vesely joined the Cougar staff back in 2011 as an assistant coach under Kyla Hoyas. Hoyas named Vesley associate head coach in 2014 and was eventually named head coach in 2016. Needless to say, the former Oklahoma All-American has been an integral part to the Cougars’ success over the last decade.

In 2011, Houston (at-large bid) steamrolled through the Austin regional defeating No. 24 Louisiana (7-2) and No. 6 Texas (1-0) to advance to the Stillwater Super Regional against Oklahoma State. The Cougars missed out on the WCWS by one run (5-6) in the if-necessary game.

With 11 CAA conference championships and seven ECC/AEC titles, the Pride dominate conference play. Point in case, Hofstra tallied a 102-12 record from 2010-2015 under both Bill Edwards and Larissa Anderson.  The Pride made its sole super regional appearance back in 2012 under legendary Edwards, losing to South Florida by one run.

Hofstra has retired six numbers in the program’s history including #2 Olivia Galati. The righthanded hurler played for the Pride from 2010-2013 and was a key component to their success in the early part of the decade. In the circle, Galati advanced to post season three times and was named the CAA Pitcher of the Year and NFCA All-Northeast region all four years.

The Terriers find loads of success at home. Boston U has posted a winning home record in all but one season (1990), most recently going 18-0 at home in 2019. Under current head coach, Ashley Waters, the Terriers have nabbed three Patriot League tournament championship titles and two Patriot League regular season titles. With six post season appearances in the last decade the Terriers have been able to qualify for the tournament but have yet to make it to the WCWS.

In 2014, Boston U traveled to Arizona to take on the No. 11 seed Arizona, falling 6-8 to the Wildcats. The Terriers turned around to beat Louisville 8-3 in the second game, only to fall to LSU in the third game.

Longwood has dominated the Big South, winning five of the past seven championships under former head coach Kathy Riley. In her 23 years at the helm, the Lancers earned seven conference titles and accumulated a 722-400-1 record. The recent success in the last decade. The Lancers advanced twice to the regional championship game against two ranked squads JMU (2016) and Tennessee (2017). Riley retired in June 2020, prompting Longwood to hire Dr. Megan Brown.

Two All-Americans are named in the Longwood history books: Megan Baltzell and Brooke Short. Both were honored in the 2013 season in which the Lancers posted a 41-20 record and Big South Tournament Championship. In her sophomore campaign, Baltzell batted .406 and set the Longwood RBI record (78) and home run record (30). Short posted a .378 average with 114 runs, 15 homers.

〈
Previous Article Boston U. Players Excelling On And Off The Field
Next Article LBSU's Special Source of Inspiration
〉