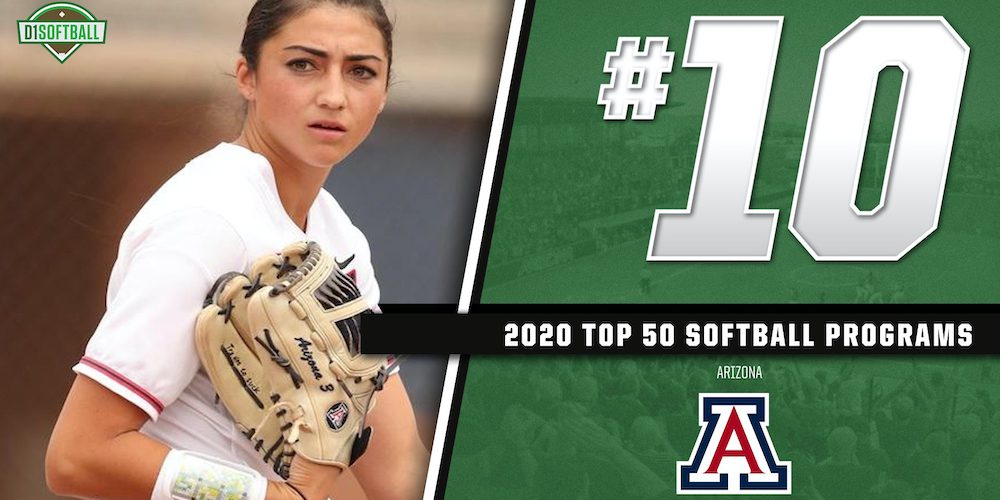 Tradition and excellence accurately describe Mike Candrea and the Arizona Wildcats. In over three decades at the helm, Candrea has led Arizona to eight national championships and 23 WCWS appearances. Add in associate head coach Caitlin Lowe and assistant coach Taryn Mowatt-McKinney, former All-Americans and national champions, and the Wildcats are back to regular form.

Arizona reached the WCWS only two times over the last decade (2010 and 2019), which is a big reason why it checked in higher than one would think at No. 10. With over 105 All-Americans, it is more than proven that Candrea and his staff can develop players and guide them to reach their full potential as a Division I athlete.

In looking back at the last decade, the 2010 Wildcats stand out in terms of team and individual accolades. The roster included four All-Americans – Brittany Lastrapes, Kenzie Fowler, Stacie Chambers, and K’Lee Arredondo. The Wildcats ended the season with a 52-14 record and finished third in the Pac-12 to earn an at-large bid to the tournament. Drawing the No. 10 seed, UA swept the Tucson Regional beating Cornell (9-0) and Hofstra (6-0 and 10-6). Hosting Super Regionals, the Wildcats swept BYU and earned their six-consecutive berth to the WCWS. Arizona fell to a familiar foe UCLA in an offensive display from both teams in the final series.

Fast forward to 2019, and Arizona travels back at the WCWS after an eight-year drought. On the backs of two future Olympians, Taylor McQuillen (Mexico), Dejah Mulipula (USA) and All-Americans Alyssa Palomino-Cardoza, Reyna Carranco, and Jessie Harper, the Wildcats put together an impressive campaign. Compiling a record of 48-14, Arizona finished conference play with a 19-5 record (3rd) just one game out of first place. UA again swept Regionals and Super Regionals in Tucson. Harper led the NCAA with 29 home runs in 2019, entering her senior season with 66 career homers.

Harper hit 10 homers in the shortened 2020 season, bringing her career mark to 76, just 19 shy of Lauren Chamberlain’s record. The NCAA ruled the records will stand, making the 2021 season all the more reason to keep a close eye on Harper and the Wildcats.

Katiyana Mauga (2014-2017): Two-time All-American is current Arizona and Pac-12 career home run holder (92-second in NCAA history) and is the only player in NCAA history to hit 20 homers in each of her four seasons.