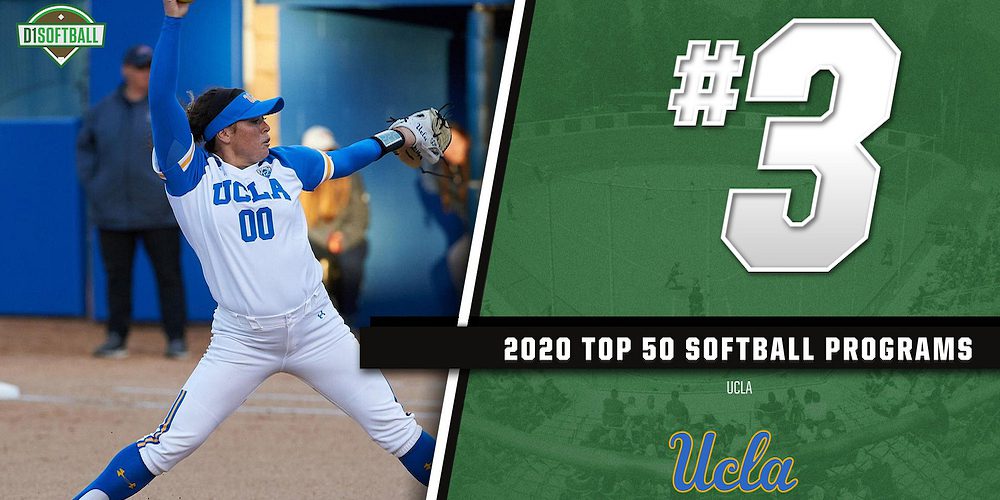 Named just the third head coach in UCLA history back in 2007, Kelly Inouye-Perez led the Bruins to a pair of national titles in the last decade (2010 & 2019).

The Bruins boast the most all-time national championships in college softball (12) and runner-up finishes (7). To put that into perspective, UCLA has played in over 50% of the championship title games since 1982. One could argue the Bruins should be higher than No. 3, but we are strictly looking at the last 10 years for this list.

UCLA hoisted the WCWS trophy at the start and end of the decade. Since we recently witnessed the walk-off by Kinsley Washington to bring home the title in 2019, we will look at the 2010 team.

The 2010 championship squad set school single-season record in home runs (108), slugging percentage (.602), one base percentage (.432) and walks (244). Led by three-time All-American, Megan Langenfeld, the Bruins compiled a 50-11 record. The righthanded senior went 14-1 with a 1.53 ERA and 76 strikeouts in her final campaign. The Pac-10 Player of the Year also led the Bruins with 20 homers, 58 RBIs, 43 walks and 140 total bases. In the same season, she was nominated for an ESPY and honored as the Los Angeles Sportswoman of the Year.

The No. 5 seeded Bruins swept the Los Angeles regional, defeating Saint Mary’s (11-4), San Diego State (4-3) and Fresno State (7-2). UCLA steamrolled through Supers with a pair of mercy-rule wins over Louisiana to return to the WCWS for the first time in six years.

The Bruins faced their biggest rival, Arizona, in the finals.

Langenfeld homered twice in the first game of the WCWS Finals, including a walk-off in the eighth inning. Named the WCWS Most Outstanding Player, the senior leader ended up going 12 for 17 at the WCWS with a .706 batting average. Andrea Harrison set a WCWS record with 11 RBIs and tied a Series record four home runs, hitting the first grand slam in WCWS Finals history in the National Championship game against Arizona. Inouye-Perez and her staff (Lisa Fernandez, Gina Vecchione and Natasha Watley) were named the NFCA National Coaching Staff of the Year.

Other Players to Note: