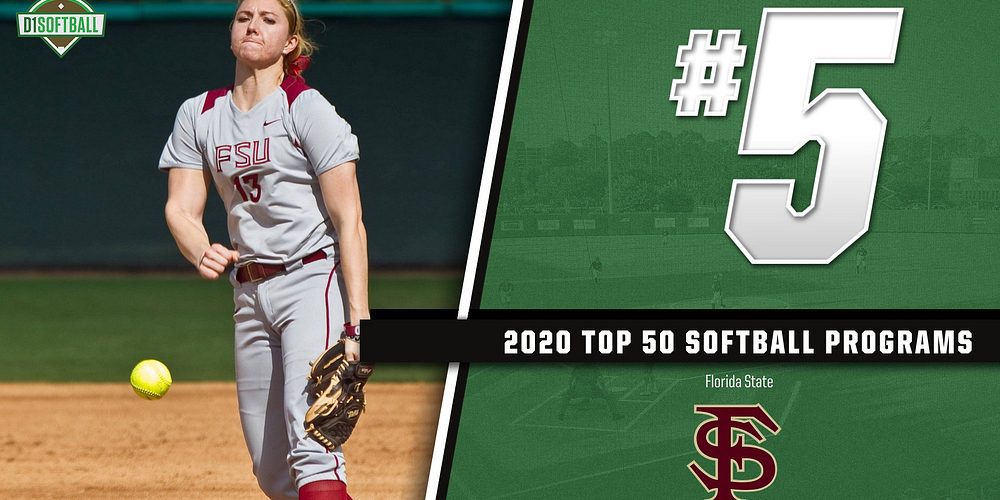 With rich tradition, upgraded facilities and a national title in 2018, the Seminoles check in at No. 5 on our Top 50 Programs countdown. Hired back in 2009, head coach Lonni Alameda has led the Seminoles to the postseason every season since taking over for legendary head coach JoAnne Graf. Graf spent 30 seasons at the helm, amassing a 1,483-487-6 record. Both coaches have combined to guide FSU to 17 regular-season conference titles. Alameda is a five-time ACC coach of the year, and the ‘Noles staff was named the 2018 NFCA National Coaching Staff of the Year after their historic WCWS run.

Let’s take a look at the 2014 squad that sent the Seminoles back to OKC for the first time since 2004. The Seminoles posted a 55-9 record, finishing No. 7 in the country and won 24 ACC games setting a new school record. Lacey Waldrop was named USA Softball National Player of the Year with a 38-7 record and 1.13 ERA. Waldrop tallied 27 complete games and struck out 287 batters in 266.1 innings. Jessica Burroughs provided extra relief for the ‘Noles, posting a 17-1 record and a 2.08 ERA with 125 strikeouts in her redshirt freshman season. All-American selection, Maddie O’Brien, led the offense in several categories, including batting average (.424), doubles (17), home runs (24), RBIs (83), slugging percentage (.942) and on-base percentage (.564).

The 2018 squad is the team we all remember. The Jessie Warren catch, the aggressive baserunning and the joy they exuded playing on the national stage. The Seminoles didn’t take the easy route to bring in their first NCAA Divisions I Championship (FSU captured two NAIA titles in ’80 & ’82). Dropping game one against No. 3 UCLA, the Seminoles became just the third team in NCAA history to drop game one of the WCWS and come back to win the national title. FSU clawed its way back through the losers bracket defeating No. 7 Georgia and No. 1 Oregon to face UCLA in a must-win semi-final. The Noles were riding high after sending home the No. 1 seed and beat the Bruins twice on Sunday to advance to the championship series.