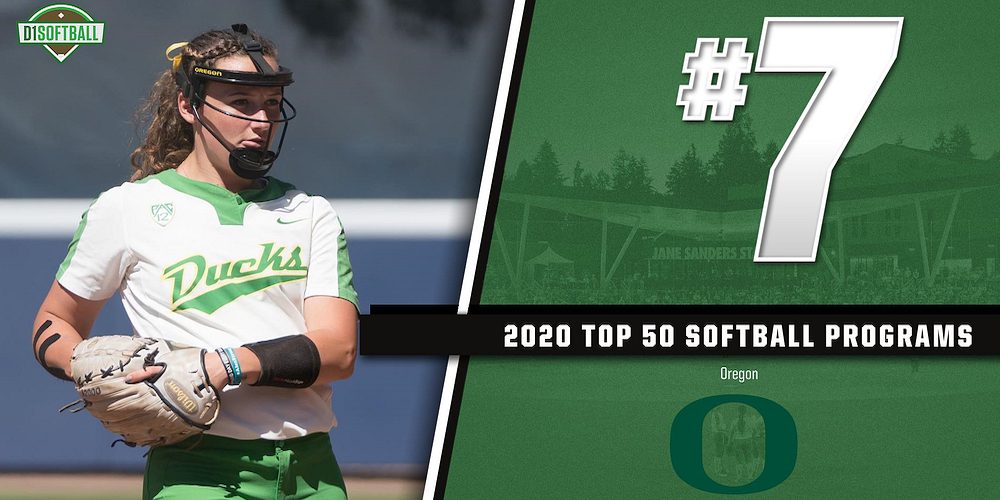 The Ducks check in at No. 7 on our top 50 programs list and join two other Pac-12 powerhouses in the top 10. The Ducks have the most wins in Pac 12 play since 2011 with 443 just ahead of UCLA’s 442. Head coach Melyssa Lombardi is entering her third season at the helm, so the bulk of these appearances and points are mostly attributed to former head coach, Mike White.

However, Lombardi comes to Eugene with quite the resume after spending 21-years at Oklahoma, 11 as associate head coach. At OU, she helped guide the Sooners to four national championships, including back-to-back titles in 2016 and 2017. Under her tutelage, Oklahoma hurlers picked up six Big-12 Pitcher of the Year awards.

But back to the Ducks and the Mike White era …

The 2012 squad drew the No. 11 seed and hosted the Eugene Regional, going 3-0 with wins over Portland State and BYU (twice). The Ducks traveled to Texas and upset the No. 6 seed Longhorns in a tight three-game series. Facing a familiar foe in the first round at the WCWS, three-seeded Arizona State, the Ducks dropped game one 3-1. On elimination Saturday, they faced Tennessee, scoring early to defeat the Lady Vols 3-1. Facing another elimination game, the Ducks fell to another Pac-12 squad, Cal, 6-3.

Entering the NCAA tournament as the No.1 seed, the 2014 Ducks posted a 56-9-1 record. Courtney Ceo led the offense with a staggering .493 average and 104 hits on the season. Cheridan Hawkins posted a 35-6 record with 1.66 ERA and struck out 330 batters. How this team didn’t win the title is still a mystery, but they ran into some trouble against Florida in Oklahoma City. They eventually fell to Alabama in the semifinals, who went on to win the title.

The 2015 squad accomplished a nearly impossible feat, surpassing the numbers put up by the 2014 offense. The Ducks won the Pac-12 Championship with a 20-3-1 record. Former hitting coach Jimmy Kolaitis had the Oregon hitters dialed in. With a team batting average of .359, there wasn’t a single starter hitting below the .333 mark. Jenna Lilley led the offense that season with a .427 average and 44 RBIs, followed by Janie Takeda (Reed) and Nikki Udria. There wasn’t a single starter in the lineup hitting under .333. The pitching staff consisted of Cheradin Hawkins (30-5), Karissa Hovinga (12-1), and the late Gerri Ann Glasco (7-2). Hawkins led the Ducks with 1.64 ERA and 282 strikeouts.