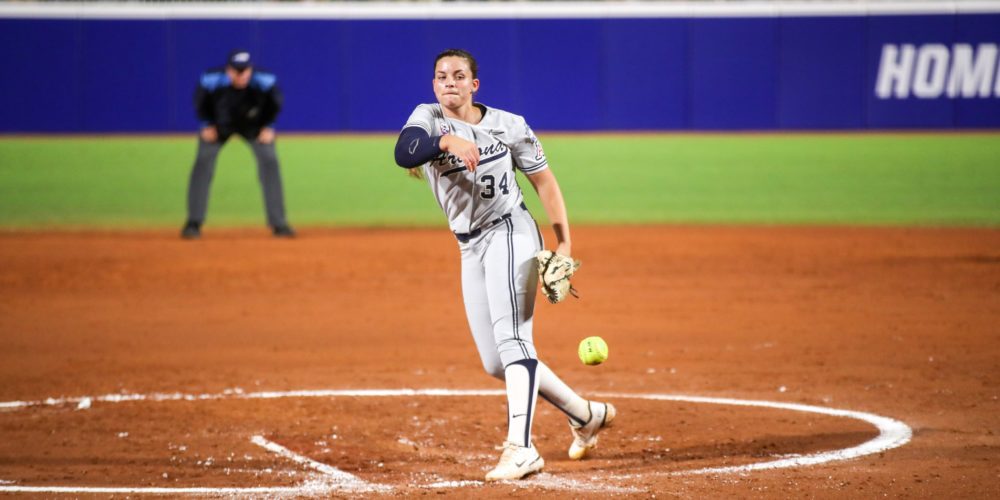 You would have understood if, out of sheer weariness, she hadn’t stood pressed against the dugout netting earlier in the inning, exhorting Hanah Bowen to finish what Netz started.

Everyone would have understood if Arizona, which sweated out a place on the NCAA tournament bubble several weeks ago, didn’t reach a super regional. Or the World Series. In the program’s first season after Mike Candrea, the Wildcats were too young. They didn’t have enough pitching.

All of it would have been understandable.

What is more difficult to makes sense of is how that team is now a game away from the World Series semifinals after avoiding elimination with a 3-1 victory against Oregon State. Despite so much accumulated evidence to the contrary, Arizona one of the last six teams standing.

Much of the explanation comes down to pitching. Perhaps more accurately, it comes down to those two pitchers, Netz and Bowen. It’s mostly about the tangible, the pitches Netz and Bowen continue to make and the improvement in each individual’s performance. Still, maybe there is something to be gleaned from those camera shots of Netz, still wearing the sweat of her own endeavors, pressed against the fence and yelling Bowen’s name during the sixth inning. Letting her know they’re in it together.

“I’d say a lot of work has gone into our relationship, both in the bullpen and off the field,” Netz said afterward. “It’s something we’ve had to work on because we faced a lot of adversity during conference play. When we came here, we knew we had a clean slate. Knowing that is pretty fun.”

She looked at the teammate seated to her right and added, “It’s been fun playing with you, Bo.”

A Long Road to OKC

The numbers aren’t pretty, but they are part of the story. Even at this stage, Arizona entered Friday’s game ranked No. 147 in the nation in ERA. And even its current 3.66 ERA is greatly enhanced by a 1.57 postseason mark. As the Wildcats waited to learn their bubble fate three weeks ago, the tea ERA stood at 3.98, barely good enough to crack the top 200 nationally. The conference-only numbers were even more painful.

What followed was nothing short of miraculous. Bowen and Netz took turns to throw five complete game gems in a row to sweep through a regional at Missouri and super regional at Mississippi State.

Maybe it came down to Bowen feeling better physically than earlier in the season, when she missed time. Maybe it was Netz, who pitched sparingly as a season ago as a freshman because of injuries, progressing naturally, albeit fortuitously well timed. With a small sample size in a sport that can be random over small samples, perhaps sheer good luck prevailed. But something worked.

For the most part, they complemented each other from afar during the postseason run. Until Thursday’s loss against Oklahoma State, when Bowen pitched well but was undone by a late Karli Petty home run with runners on base and yielded to Netz, each had only thrown complete games. It was enough for Arizona coach Caitlin Lowe to keep opponents off balance on a game-to-game basis, alternating Bowen’s strength up in the zone with Netz’s strength low in the zone.

Combining to Extend the Season

It would have been easy to ride with Netz beyond the fifth inning. She hardly looked awed by the surrounding in her first World Series start. Oregon State scratched together a run with some small ball in the second inning, but Netz didn’t allow a hit in the next three innings. She retired the side in order in both the fourth and fifth innings. She was, once again, rolling.

“I probably have to describe it as something that was not as nerve-wracking as it was trying to get here,” Netz said of the experience. “I know my nerves were pretty high against Mississippi State. I know coming in here, I have nothing to lose. I know I have Bo in the bullpen, a good offense, a good defense, so it’s just a matter of time.”

But with the heart of Oregon State’s order due up in the sixth inning, Mariah Mazon, Frankie Hammoude and Kaylah Nelsen, Lowe sent Bowen out to begin the sixth inning. She retired them on seven pitches, Mazon and Hammoude grounding out on pitches away and slightly up and Nelsen chasing a rise for an easy fly ball to center.

Singular excellence has been the theme of Arizona’s most recent World Series glory. Whether Alicia Hollowell throwing every game in 2006, Taryne Mowatt’s 1,037-pitch marathon in 2007 or Kenzie Fowler’s steadfast presence en route to the 2010 championship series. But those days are gone. Not just for Arizona and not just because it’s a new era and a new coach. More and more, those days are gone for everyone. Today, pitching has to be a team effort. It has to be taking the best from each pitcher to make a better whole.

“They realized that they could do it together and have those weaknesses, have those flaws,” Lowe said. “We needed something up in the zone. Devyn doesn’t throw that, that’s not her specialty. Bo comes in and does it for her.

“That makes my heart happy that [the whole team is] leaning on each other, not just in the circle, but all around, offense, defense and in the circle.”