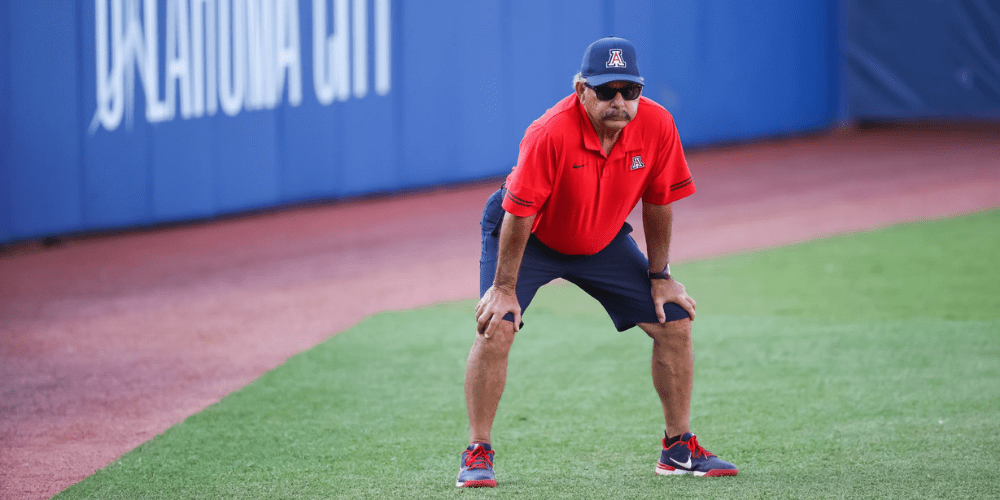 Editor’s note: Arizona announced Monday evening that Caitlin Lowe will take over as its softball coach.

Mike Candrea didn’t lose many recruiting battles at Arizona. The coach who won more games than anyone in Division I softball didn’t lose much, period, in 36 seasons with the Wildcats.

But as Candrea walks away from the sport he helped shape, announcing his retirement Monday with 1,674 wins, eight national championships and an Olympic gold medal, the story of one recruit who got away is instructive in explaining his legacy.

A Southern California native who was raised on the folklore and folk heroes of UCLA softball, Natasha Watley became as synonymous with that program as anyone who ever wore a Bruins uniform. Except that before she was a four-time All-American shortstop, Honda Award winner and Olympic gold medalist, Watley nearly signed on with the arch rival Wildcats.

How close? Even less time than it took her to get from home to first.

“I was .2 seconds away from committing to him,” Watley joked. “My lifelong dream was to be a Bruin. And then I went on my official visit to Arizona and called my parents from there and said ‘I think I’m going to commit to him tomorrow morning.’”

Her parents didn’t have anything against Candrea or the program in Tucson, but they advised their teenage daughter to take her time and not rush an important decision. She relented and returned home uncommitted. The rest is softball history. But Watley eventually got the chance to play for Candrea, winning Olympic gold in 2004 and silver in 2008. And what she experienced in those years on the national team showed her that her first impression had been correct.

“You just want to be around him because it’s not fluff. It’s genuine and it’s real.”

Generations of players who chose Arizona felt the same way. And together with their coach, they helped make the sport the spectacle that now fills two decks at Hall of Fame Stadium.

Even before the sport came under the NCAA umbrella in 1982, UCLA was softball’s emerging flagship.  The Bruins ruled the same way that Tennessee women’s basketball or North Carolina women’s soccer did in the early NCAA decades. Those programs set a standard of excellence.

And like those other sports, softball was guaranteed to grow and evolve regardless of what happened elsewhere. Growth was inevitable because society evolved. Girls and women had more opportunities in sports. But the rate of evolution depended on those who had to meet the standard set by Sharron Backus (and then Sue Enquist) at UCLA, Pat Summitt at Tennessee or Anson Dorrance at North Carolina.

That’s where softball was fortunate. Fortunate because along with Carol Hutchins at Michigan, who settled the cold-weather frontier and will now presumably overtake her Arizona counterpart in their neck-and-neck duel for most career wins, softball converted Candrea after Central Arizona College athletic director George Young challenged the baseball coach to try softball.

And he gave back by accelerating the growth of a sport that a great many people now love.

“Coach Candrea is the gold standard of college softball,” Alabama’s Patrick Murphy said before this year’s World Series, recalling a time as a young coach when he borrowed Nike’s “Be like Mike” mantra in answering a question about his goals. “He was the guy that everybody looked up to in softball and had won an ungodly amount of championships and games. Arizona was the gold standard and he was the gold standard. He had coached Olympic teams to gold medals.”

After some modest success in the AIAW era of college softball in the 1970s, Arizona was mostly anonymous when Candrea took over in 1986. Not a laughingstock but hardly a powerhouse.

His first team finished 14 games above .500. The Wildcats wouldn’t be even that close to the break-even mark again until 2013. Beginning with their first national championship in 1991, they won eight of the next 16 available titles in seasons Candrea coached (he took leaves in 2004 and 2008 to coach Team USA through the Athens and Beijing Olympics).

That run included three of the four best single-season winning percentages in Division I history, as well as a record 47-game winning streak that Oklahoma challenged but didn’t break in 2021.

Just as UConn met Tennessee’s challenge in a rivalry that lifted a sport, Arizona took on UCLA.

The sport benefitted when the championship race expanded beyond those two schools. But it first benefitted from a rivalry that even casual sports fans had at least heard about. They might not know anything else about softball, but they knew Arizona and UCLA were pretty good.

Arizona won its last title in fittingly epic fashion in 2007, current pitching coach Taryne Mowatt-McKinney throwing more than a thousand pitches to lead the Wildcats back from the brink. But as this season’s run proved yet again, Arizona never ceased mattering. Nearly four decades in, Candrea still took a team in the World Series, still produced Olympians like Dejah Mulipola and still had a player in Jessie Harper who chased the sport’s all-time home run record.

“He has stayed current for a long time, and that’s pretty cool as a coach,” Murphy said. “Sometimes you think the game passes somebody by and it has not with him.”

And yet after Arizona was eliminated in this year’s World Series, a contemplative Candrea joked that a visitor would look around at all the names of the stars who played at Hillenbrand Stadium and think that whoever coached them had better have won a bunch of titles.

That’s not true, of course. But the measure of Candrea isn’t in the talent he recruited or even what they accomplished on the field when they were in Tucson. It’s the people they became.

ESPN’s Jenny Dalton-Hill recalled going into Candrea’s office after a frustrating freshman season in 1993 and questioning if she had a role moving forward.

“I think right now in this moment, I believe in you more than you believe in you,” Dalton-Hill recalled Candrea telling her. “You’re going to be an All-American.”

As usual, he was right. That message was still getting through a quarter of a century later.

“I feel like I’m forever indebted to coach because he really has had such an impact on my life,” Malia Martinez said after her final game. “He’s really built me into the person I am, both on and off the field. He’s always there for me. I just love that man so much, and I owe him everything.”

Year after year, he mentored young women to become leaders of a new generation. And his final act, in addition to sending Mulipola to the Olympics to bring home the gold his USA team stunningly lost in 2008, may be seizing one more opportunity to lift up the women around him.

The old saying about replacing legends is that you want to be the person who replaces the person who replaces the legend — not the first person in the line of succession. But in a sport trying to retain its own and be better at giving women the opportunities they need to enter and progress in coaching, handing the reins to associate coach Caitlin Lowe would be tempting.

“She brings a wealth of knowledge,” Candrea said last week. “I think she’s moved from a very good player to a very good coach. I think she’s got a great knowledge of the game, has a really good approach to the players. I couldn’t be happier to have someone like her on our staff.

“She is definitely going to be a very, very good head coach one day.”

Maybe one day very soon. Because what Mike Candrea meant to softball is only partly measured in the games he won. Even if there were a heck of a lot of those.

“I thought one my biggest assets as a coach has to be to be able to grow the sport,” Candrea said. “To me, if I look back at my career, I have been very blessed to be able to do something that I love to do and have a passion for and be able to work with great young athletes. And I’ve been able to see the sport grow. To me, that’s the fun part.”