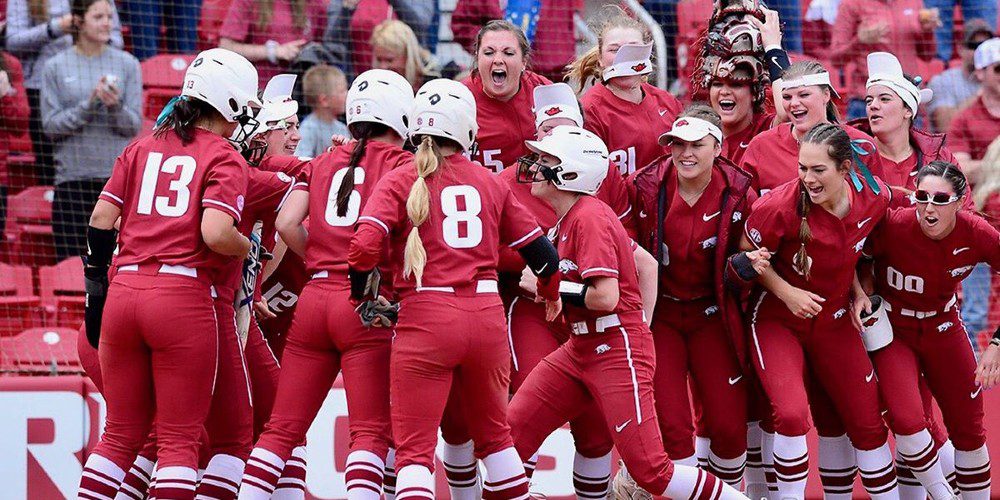 From her position at third base, senior Autumn Buczek had to take a moment to soak in the atmosphere.

Arkansas was hosting an NCAA regional in 2018 for the first time in program history. More than 6,100 fans streamed through the gates that weekend at Bogle Park, including 2,142 for the clinching win.

Only a few years earlier, the Razorbacks were lucky to get 50 people in the stands, and most of them were parents or significant others.

“I remember just looking around and thinking, ‘I can’t believe we have actually made it here,’” Buczek said. “It was surreal. The first few years it was just an absolute struggle. We had to work really hard to put the program back on the map from the fan standpoint.”

Transformed by the hiring of head coach Courtney Deifel, the Razorbacks are not only back on the map locally, they have vaulted onto the national radar.

Deifel arrived before the 2016 season and quickly changed the trajectory of the program. She is the only head coach in school history to earn three straight NCAA tournament berths (2017, 2018, 2019), and Arkansas has been ranked 38 times in the NFCA Coaches’ Poll after having been only ranked once previously.

The recent run of success elevated Arkansas to No. 38 on D1Softball’s Top Programs of the last decade list.

“I can’t say enough about the impact the new coaching staff had on the program. They came in and flipped the whole mindset we had as a team,” Buczek said. “They helped us relearn how to win games and how to be competitive again and want to win and not fear failing or fear losing after struggling for so long. They helped us get that competitive juice back.”

During her first meeting with the team, Deifel discussed the steps the Razorbacks needed to take to become relevant beyond their own dugout. She wanted them to know where they were starting so they could appreciate the journey to where they were going.

“We talked about the perception of our program on campus, in our athletic department and in the softball world,” Deifel said. “Nobody was coming to our games, but there were definitely fans here that wanted to follow Arkansas athletics. It’s not just about wins. We had to give them a product they wanted to follow. It’s our responsibility. They don’t just show up. You have to give them something they want to watch.”

Their playing style sparked an interest, their spirit kept fans coming back and their community involvement helped secure an emotional bond.

All of the top 10 most attended games in program history have come in the Deifel coaching era.

“What is really special about Arkansas is there are no other professional teams or big state schools. There are just Arkansas fans from border to border in the state who follow the Razorbacks,” Deifel said. “It’s been really neat to see the growth we’ve had with those fans the last five years.”

“I was a jumper. I like to jump and spin and have big celebrations at third base, so having the crowd there just feeds that excitement,” Buczek said. “I feed off that and I love getting excited for my teammates.”

The NCAA regional in 2018 is viewed as a breakthrough moment for the program. Seeing the crowds build for each game validated all the work done behind the scenes.

“We had never done that before. Getting to host and winning it to go to Super Regionals was huge for us,” Deifel said. “When you do something that has never been done it’s incredibly special. It was an incredible feat for this program.”

Although the Razorbacks lost in the Super Regionals at Oklahoma, sweeping the regional at home signaled their arrival.

“People hadn’t really thought of us in that way. We had been in some conversations, but I think a lot of people didn’t think we belonged here,” Deifel said. “Being able to prove that was huge. Anytime someone counts you out and doesn’t think you belong there and then you prove them wrong is awesome.”

Although there are more goals to accomplish and “firsts” to achieve, the standard at Arkansas has been set. The program expects to host NCAA games and have the stands packed with fans.

Having seen how far the Razorbacks have ascended in the last few years, Buczek is grateful to have been on the ground floor of the change in 2018.

“There was just an overwhelming sense of pride and excitement for our team, especially our seniors that had been through the rough patches and barely making it through seasons with no hopes of the postseason even being an option,” she said. “It was really rewarding, and just an incredible way to be able to end my career of playing for Arkansas.”