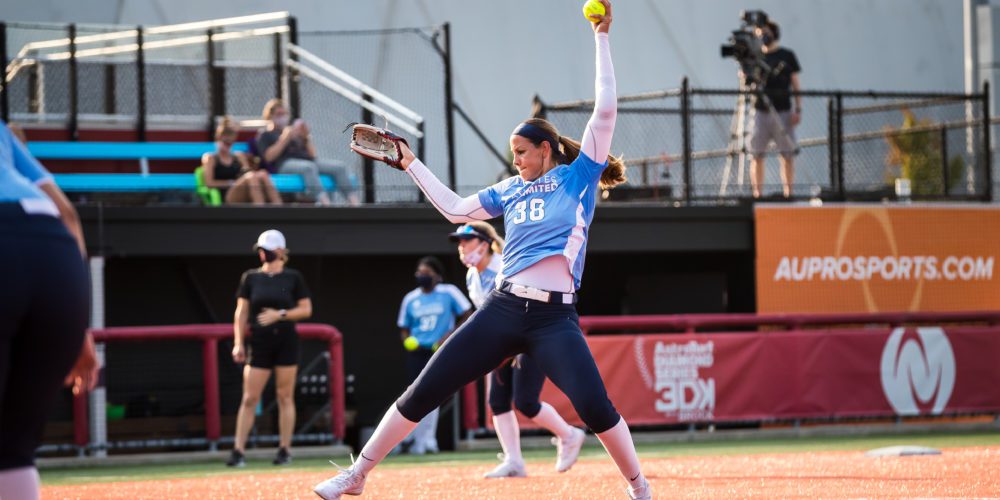 No longer the new kid on the block, Athletes Unlimited begins its second season this week as the great hope for professional softball in the United States. And for now, its only option.

National Pro Fastpitch is no more, the longstanding league suspending operations earlier this summer. The Olympics are off the table until 2028 in Los Angeles, seven long years from now. That leaves the field to four-team Athletes Unlimited and its unique format with an individual champion and no set week-to-week rosters.

The Athletes Unlimited brand now features lacrosse and volleyball leagues but launched in 2020 with softball and the promise of an “innovative new model” for women’s professional sports.

All games during the five-week schedule are played at the Ballpark at Rosemont, next door to Chicago’s O’Hare Airport. That feature unintentionally served the league well in staging its first two seasons amid a pandemic (unlike last season, fans will be in the stands this week).

For all the scoring nuances, Athletes Unlimited’s debut season featured the same storyline as a lot of softball played this century. Namely, Cat Osterman dominating hitters. The lefty cruised to the inaugural title and returns for one final curtain call after her Olympic summer.

The league also earned rave reviews from the participants. Athletes Unlimited compensated them well relative to professional softball’s spotty history (five figures for the short season, with additional stakes in the league’s future), took care of them on site and encouraged them to use their voices beyond the field to address or advance social causes important to them.

Oh, and the softball itself was darn good, if sometimes a little short on pitching.

“I went into AU thinking you’re going to feel a lot of pressure just because of the talent and the scoring system — everything counts,” said Erika Piancastelli, who finished fourth. “The amazing thing is about this league is the moment you get here and you meet all the girls and the way AU’s staff treats you and the way this league treats you, it just takes all that pressure away. I’ve never had so much fun on the field and felt zero pressure. I’ve never been so relaxed in the box in my life.

“I think it was just being around the girls and seeing how much everyone loves playing and wanted to be here and have fun. It takes the pressure away and allows you to play freely.”

Here’s what to expect ahead of this week’s opening draft.

The league features 60 players for its second season, four more than its initial season. That includes 39 holdovers from the first season, bolstered by the league’s first college draftees, familiar veterans and even rookies who earned their way via a two-day open tryout in June.

Among 2021 newcomers is Mexican Olympian and fan favorite Sydney Romero.

Also returning is Aleshia Ocasio, who finished 11th in 2020 despite missing a week of games.

How does this work again?

Game still last seven innings. Runners still can’t lead off their bases before a pitch is thrown. And the team that scores the most runs still wins. There is a delicate balance between gimmick and innovation, but those associated with the endeavor insist it is about reimagining a business model more than reinventing what happens on the field. The first season largely backed up that assertion. It looked and felt like the same old softball. Just with a few tweaks.

No set rosters from week to week. Each team plays three games in a given week. Rosters for those games do not change. In other words, your teammates in the first game of the week are your teammates for all games that week. But that’s it. When the week ends, regardless of the results, rosters reset and all 60 players go back into the draft pool. Four player captains who earned the most points the previous week, de facto general managers, then draft new teams for the following week.

Points for individual performance. Individual statistics are familiar enough to softball fans, but they take on new meaning here. A home run increases your team’s chances of winning, but it also increases your own chances of accumulating the most individual points in a given week or over the course of the season. And like tennis players competing for the No. 1 ranking, it’s individual players rather than teams who are vying for the championship.

For pitchers, four points are awarded for each out recorded and 10 points deducted for each earned run allowed.

There are no specific points awarded or deducted for defensive plays.

No individual points are awarded in extra innings.

Points for team performance. Players also earn points through team performance. If a team wins the game, each of its players earns 50 points. Additionally, if a team “wins” an inning by outscoring the opponent, each of its players earns 10 points. And crucially, if no team wins an inning, those 10 points roll over, making the next inning worth 20 points.

Points for MVP voting. The final way to earn points is through an MVP vote after each game. Players from both teams vote for the top three performers. The league also offers a premium club that allows fans to participate, with those results counted as one collective vote — meaning there will be 30 ballots from players and one ballot from fans. The player who comes in first in the balloting earns 60 points, second place earns 40 points and third place earns 20 points.

She earned the most points in the league in each of those areas (sharing the lead for points from wins with Svekis, who caught her each week), so the championship race was simple.

What about if there isn’t as singularly dominating a performance this season? Well, winning clearly drives the title race. Sahvanna Jaquish earned the second-most stat points last season by a fairly comfortable margin, thanks to some impressive slugging, but she finished ninth in the overall standings because the teams she played on struggled to match her production.

No coaches. This really is an enterprise built around players. Each team will be assigned one of four “facilitators,” who are non-players with some coaching experience. But it’s entirely up to each captain how much input, if any, the facilitator has on lineups or strategy. Captains can also designate a teammate to make such decisions during part or all of a game.

Where can I watch?

This is where it gets tricky for any fledging league in a saturated sports market. After splitting games between ESPN (most through the ESPN+ streaming platform) and CBS Sports Network in its first season, Athletes Unlimited shifts to a combination that still includes CBS but replaces ESPN with Fox Sports, Fox Deportes, Yahoo and Facebook.

CBS gets what amounts to the game of the week, the game between the teams drafted by the players with the top point performances the previous week, as well as the final game of the season and all its championship ramifications.

Fox will broadcast 15 games between FS1 and FS2 (Fox Deportes will also show those games in Spanish, although some may be tape delayed, according to a league release).

In a vacuum that’s not bad. Every game will still be available, with more available via traditional non-streaming means. And it’s not as if ESPN went out of its way to promote the league across its platforms. The concern for an entity still trying to build loyalty is whether or not people put in the effort to find the games if they have to look in different places each year and each week.

Still, the positive takeaway is there are 30 high-quality softball games available to watch.