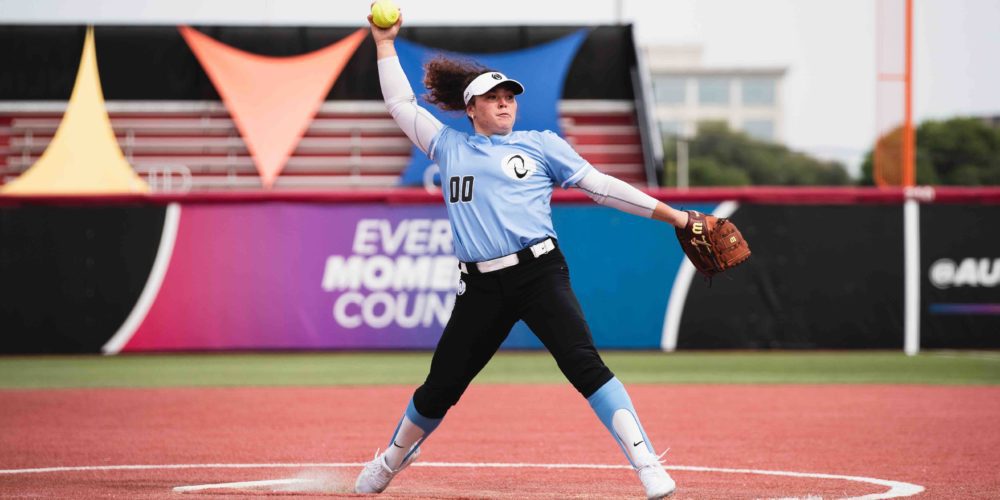 If this is to be the season a hitter finally wins an Athletes Unlimited title, those who wield the bats aren’t exactly finishing with a flourish.

Pitching dominated the penultimate day of the season — so much so that a pitcher who didn’t even step into the circle knocked Dejah Mulipola out of the top spot on the leaderboard. And after a day to rest her arm, Alyssa Denham will wake up Sunday with the title hers to win.

Just like pitchers Cat Osterman in 2020, Aleshia Ocasio in 2021 and Danielle O’Toole in AUX.

As good as she’s been in her own right all season, Denham’s championship-deciding performance might have come in Monday’s draft, when she selected fellow pitcher Rachel Garcia in the first round. After Denham’s strong effort Friday, Garcia followed with a 272-point shutout on Saturday — reaching the maximum points a pitcher can earn and adding eight more via a walk at the plate.

But unlike the first two championship seasons, and very much like an AUX season that wasn’t settled until a walk-off grand slam, everything is still up for grabs Sunday.

Here is a quick synopsis of the title race, before we recap Saturday’s action.

Alyssa Denham: The easy scenario. If her team beats Team McCleney on Sunday, she likely wins the title. She will get the same win points as her teammates. And among those teammates, only Sahvanna Jaquish could even aspire to pass Denham purely on stat and MVP points. And beating Team McCleney knocks out three of her closest challengers.

The caveat is that as the only pitcher among the frontrunners, Denham is also the only one who can lose points Sunday. It’s not inconceivable to imagine her team wins a 7-5 game but the 10 points she loses for each earned run allowed open the door for one of the other contenders.

Haylie McCleney/Shannon Rhodes/Sam Fischer: The three teammates are within 30 points of each other, with McCleney in second place overall. That sets up a race within the race. Each not only needs Team McCleney to win and knock Denham out of the race — but to also outperform the other two. That could leave the title in the hands of the players voting for game MVP honors.

Dejah Mulipola: The frontrunner for the past two weeks, Mulipola is far from out of it despite her team’s two losses this week. But it’s going to be a tight needle to thread. Her best bet is for Team Denham to beat Team McCleney in a moderately high-scoring game in Sunday’s opener. That would knock McCleney, Rhodes and Fischer out of the running but also likely limit Denham’s points haul in victory.

In that scenario, Mulipola might be able to erase most of Denham’s current 46-point lead through team performance. Even a decent solo performance, like a double and MVP-3 honors, could then push her back to the top of the leaderboard.

Danielle O’Toole/Amanda Chidester: The wildest of wild cards. Both players who are retiring after Sunday retain slim title hopes.

As Team McCleney’s ace, O’Toole could conceivably come up with a 250-point day and move ahead of McCleney, Rhodes and Fischer if all have quiet days but the team still somehow wins.

Chidester likewise needs a monster individual performance in a win against Team Mulipola. Even then, she still needs to make up roughly 100 points on someone from the winner between Team Denham and Team McCleney. If anyone comes out of that game with 1,750 points, there’s no hope for Chiddy.

Danielle O’Toole really can do everything. The ace was in the middle of an in-game interview when Bates made her diving catch to start the pivotal double play in the third inning. O’Toole’s spontaneous and unplanned ‘Hell yeah!’ commentary summed it up rather perfectly.

And it wasn’t even the only moment when the analysis applied.

The Kids Can Pitch

While we need to have another discussion about how the MVP award continues to be an abysmal failure as a means to reward defense (see: Bates, Sis), it’s still a good story to see rookie pitchers at the top of the list from Team McCleney’s victory. Peyton St. George and Maggie Balint split those points for their five innings of shutout relief that secured the win.

McCleney ended up with three rookies on her pitching staff, and veteran Danielle O’Toole had worked deep into the night Friday. So in one sense, McCleney didn’t have much choice about who she threw Saturday. But it’s still in character for the centerfielder to work on building the league and sport’s future, even while chasing a title of her own this weekend.

There has been a lot of turnover in the circle in AU. O’Toole, Taylor McQuillin, Aleshia Ocasio and Haylie Wagner are the only holdovers from the inaugural 2020 season. At some level, even in this day and age, any softball league is going to be only as good as its pitching. That position still drives the sport. So, Athletes Unlimited needs a new generation of pitchers, a reality that only grows more pressing with O’Toole’s retirement.

Rookie Georgia Corrick certainly looked the part in AUX but had international commitments the rest of the summer. Rachel Garcia isn’t fresh from college, but her pro debut has been a rousing success that hopefully portends at least several more seasons on the field from someone who wasn’t sure about her future after last year’s Olympics.

Garcia’s foe in Saturday’s game, Odicci Alexander has been up and down in her second season but is only going to get better from her time in Japan — if she remains with AU moving forward.

Alyssa Denham looks for all the world like this generation’s Sarah Pauly, the long-levered pitcher who thrived as a pro and ranked among the all-time winningest pitchers in NPF history.

And despite fading from the title race after a quick start this season, Carrie Eberle’s first two seasons have been an unmitigated success.

Has the league found (at least) two more arms to build around?

St. George has consistently been among the first 2022 collegians drafted each week in AU, impressing with her energy and poise long before her clutch stints this weekend. After an injury-marred AUX debut, Balint has been much better this month than her ERA suggested entering Saturday. To see both thrive under pressure Saturday offers hope for the league.

The challenge, with a competitor in the marketplace and the financial reality that pursuing any pro career for more than a summer or two is still difficult, will be making sure we see more of both St. George and Balint next year.

Where does legendary Michigan coach Carol Hutchins go the first weekend after retirement? A softball game because, of course. The winningest coach in Division I history made a surprise trip to Rosemont to cheer on Chidester’s title pursuit, along with former Wolverines Abby Ramirez, Sierra Romero and Haylie Wagner.

Lorenz moved into the top 10 with another strong effort Saturday, going 2-for-4 with an RBI triple. She leads all players in MVP points this season (200) after picking up MVP-3 honors in the game.

She is slightly too far off the pace to make a run a the title Sunday, but here’s the thing: Lorenz played two fewer games than everyone else.

An excused absence earlier this season cost Lorenz two games in a weekend. If she averaged even 100 points in those games (less than she’s averaging per game at the moment), she would be in first place entering Sunday’s season finale.

Morgan Zerkle’s Streak on the Brink

Barring the greatest single-day performance in softball history, Morgan Zerkle isn’t going to finish in the top 10 this season. After going 1-for-3 for Team Mulipola in Saturday’s defeat, Zerkle sits at No. 44 on the leaderboard.

Her likely fate is notable because it ends one of the league’s most remarkable streaks. The former Marshall standout and current Miami assistant coach not only finished in the top 10 in each of AU’s first two championship seasons but the inaugural AUX season in June.

No other player managed that feat. Not Cat Osterman, Aleshia Ocasio or Danielle O’Toole, the champions in those respective competitions. Not anyone else.

For three years, Zerkle has been as easy to find near the top of the leaderboard as she is to find at the bottom of an alphabetical league roster. That’s worth celebrating, even as it ends.