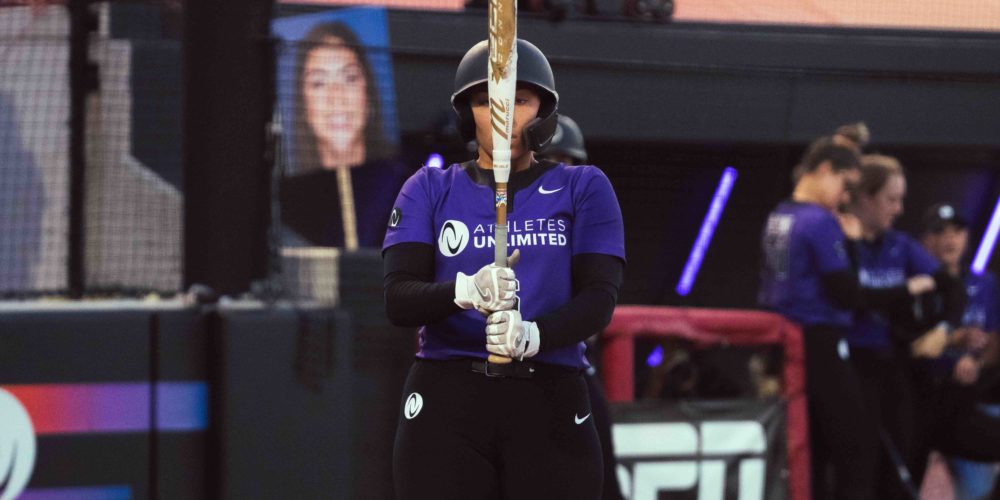 We’re one day closer to the end of the Athletes Unlimited championship season, but we aren’t any closer to knowing which contender will walk away with the title.

Alyssa Denham won her first ever game as a captain and briefly climbed to the top of the leaderboard, but Amanda Chidester did enough in defeat to keep a place in the race.

And while Dejah Mulipola could have opened up a commanding lead with a victory in the nightcap, Haylie McCleney’s team spoiled those plans — and might have added a new challenger to the mix in the form of slugging rookie Shannon Rhodes.

With two days to play, the four captains are separated by  just 78 points. And after jumping six places in a night, Rhodes is suddenly just 110 points out of first place.

Here’s what you need to know from a day that entertained but settled little.

The Pop-Up Heard Around the World

Aubrey Leach has been one of the best players in the league this season on both sides of the ball, but you wonder how much history might eventually turn on the Sydney Sherrill pop-up she couldn’t keep in her glove in the fifth inning.

Why did it matter in what still proved to be a comfortable victory for Team Denham?

Giving Team Chidester the extra out eventually set the stage for Chidester’s home run. And in the context of the title race, it wasn’t just any home run. In addition to 40 points for the hit, the runs clinched 20 innings points for Chidester (and every other player on her team).

The home run also formed the bulk of Chidester’s case for MVP votes – she received 20 points for getting the third-most votes. Not just that, but it led Denham to pull herself from the game. If Leach catches the pop, Denham gets out of the inning and bolsters her case for at least the 20 MVP points that eventually went to Chidester.

In the end, Denham outscored Chidester on the night — but only by 56 points, essentially the margin created by winning the game and nothing more. Chidester remained nearly level on the overall leaderboard (opening the door for Mulipola to potentially take an almost insurmountable lead on both of them in the day’s second game).

Defensive Player of the Year Watch

The overall title isn’t the only prize up for grabs this weekend. And as a former winner of Defensive Player of the Year, Anissa Urtez would like to make history with a repeat.

Much of the rookie focus has gone to the pitchers – every league is always looking for pitching. But while Shannon Rhodes long ago secured honors as the best rookie, after sitting out the summer of 2021, Gibson is quietly putting together one of the summer’s best debut by a 2022 collegian.

Gibson, you might remember, actually earned a captaincy early in AUX, before an injury effectively shut her down for the final few games in San Diego. She was still rounding into form as the championship season began — she was just an 11th round pick in the opening draft. But with her home run Friday, she’s hitting .310 with a .552 slugging percentage and eight RBIs.

Seeing her in right field Friday took some getting used to, but she acquitted herself well even there. If she returns in 2023, she’s going to be a difference-maker.

The Rookie to Lead Them All

There (probably?) isn’t enough time for Shannon Rhodes to leapfrog all four captains and win the title, but darned if she isn’t giving it her best shot.

Remember how Denham, despite pitching well and winning, gained only 56 points on the defeated Chidester in the first game? Well, Rhodes was so good in the nightcap that she gained 124 points on her own captain, Haylie McCleney.

Rhodes is hitting .419 with a 1070 slugging percentage and .479 on-base percentage. Mulipola still has her beat on those numbers, but she’s about the only one. Rhodes already has more total bases than any batter accumulated in 2021 (in two more games than Rhodes has played).

Only one player in the league’s first two seasons — Sahvanna Jaquish in 2020 — accumulated more than the 46 total bases that Rhodes already has through 13 games.

We’ve seen this before when very good collegiate hitters get the opportunity to perfect their skills. For a summer early in the last decade, Alissa Haber was the best hitter in the world. Valerie Arioto and Megan Wiggins both spent multiple summers in the 2010s as the hitters absolutely no pitcher on the planet wanted to face.

Mulipola’s transcendent numbers may mean Rhodes is only have the second-best season in AU, but she’s having the kind of summer that makes you wonder what comes next.