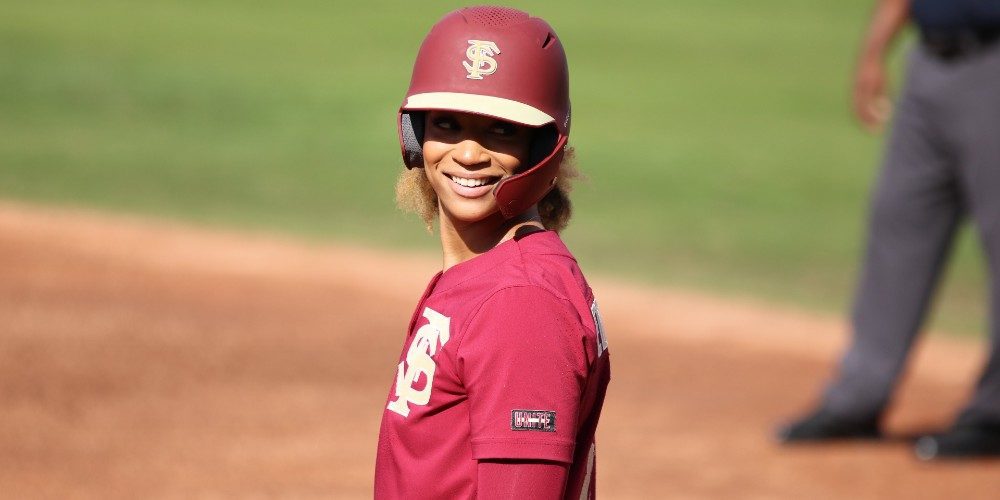 The makeup worn behind the catching mask is a source of empowerment for Michaela Edenfield.

The Florida State redshirt freshman was bullied when she was younger and began searching for a way to stay positive.

Edenfield watched episodes of RuPaul’s Drag Race on YouTube and found her inspiration.

“They just exuded this crazy amount of confidence and attitude and fierceness and I wanted that for myself,” Edenfield said. “Being bullied, I was a little down on myself and really insecure and I really wanted to have that confidence.”

The makeup became Edenfield’s “war paint” and sports became her vehicle to soar above the pettiness. The Sneads, Fla., native emerged into a star in her hometown and the bullying about her race gradually faded.

Edenfield has stepped onto a bigger stage at FSU and helped the Seminoles remain among the top programs in the country. She is batting .292 with a team-leading 16 home runs and 48 RBIs, and was recently named to the NFCA’s Top 25 Freshman of the Year list.

“Michaela has been an incredible addition to our team this season. She has a unique and creative personality that is so fun to be around,” FSU senior third baseman Sydney Sherrill said. “She is humble in every way and a special talent that FSU will treasure for years to come. What she has done behind the plate is just as special as how she has performed in the batter’s box.”

Edenfield comes from a softball family. Her mom, aunts and older sister played the sport. One aunt, Teresa (Edenfield) Fecteau played at FSU.

The day after she was born, Edenfield was at the softball field attending her sister’s game. Once she picked up a bat for the first time, her natural ability was evident.

She broke a coach’s kneecap with a line drive during practice. Another scorcher whizzed by an outfielder’s face during a game.

“I decided it was time to pull her out of rec ball and move her to travel ball. I was scared she would hurt somebody,” said Edenfield’s mom, Tami Powell. “She was hitting the ball so hard and I realized I needed to get her out before something serious happened.”

The 6-foot-1 Edenfield has always been bigger than her peers. Her family had to carry around her birth certificate to prove her real age. She spent nearly six years playing at the 18U level.

Edenfield wanted to be a pitcher, but her travel team needed a catcher and she volunteered to move behind the plate. She quickly fell in love with the position, which surprised her mom.

“As a child, she would come to me with dirt between her fingers and didn’t like to get dirty at all. She goes from that to the dirtiest person on the field,” Powell said. “I have pictures where she is orange and everybody else still has white shirts on.”

Edenfield’s athleticism helped her excel in softball and volleyball. She was a four-time state champion in high school as a middle blocker and the volleyball team’s MVP in 2017.

Her work ethic was renowned. Edenfield was running stadiums and flipping tire trucks in middle school for summer workouts.

Edenfield’s transition to FSU was anything but smooth. She arrived on campus in August of 2020 with plans to redshirt behind starting catcher Anna Shelnutt. Her learning curve got thrown out of whack when she became the first member of the team to test positive for Covid.

Edenfield had to be quarantined the day before the first fall practice. Her fever elevated to 103 degrees and she couldn’t taste or smell. She felt like a pariah.

“Nobody wanted to be the first. There was a little anxiety about that and a lot of people pointing fingers a little bit,” Edenfield said. “It really tested me as a person coming in as a freshman.”

Edenfield had to get an electrocardiogram to return to practice and doctors found a heart murmur. Her wait was delayed even more.

The day she got cleared, Edenfield visited the doctor’s office in full uniform. It was the last day of fall practice and she was eager to finally join her teammates in live drills.

“Practice was done by the time I got back to the field and I remember being so devastated,” she said. “It just made me even more grateful this fall to be out there. Whenever I was tired or thought I don’t really want to do this right now, I can think back on that time and how I should be grateful for every opportunity I get even if we are running ourselves to death at practice.”

Edenfield knew it wouldn’t be easy to replace Shelnutt at catcher.

The two first met when Edenfield attended an FSU camp before joining the program. Shelnutt was immediately impressed by her skill, stature and personality.

“She is incredibly tall and a muscularly-built girl and you expect her to be extremely intimidating. But she speaks to you in the sweetest voice and is the sweetest girl,” Shelnutt said. “I’ve never heard her be mean to anyone or say anything remotely negative to somebody.”

Although she wanted to be on the field, Edenfield tried to soak up as much knowledge as possible from Shelnutt last season while the Seminoles made another run to the Women’s College World Series final.

“She was always open to everything,” Shelnutt said. “The best way to describe Michaela is that she was annoyingly wanting to learn. That is a good thing. She didn’t act like she knew everything. She asked so many questions.”

As she’s crushed clutch home runs and thrown out runners this season, Edenfield’s only regret is that her grandfather, Roy Edenfield, isn’t here to witness it. Roy Edenfield, “a photographer, daylily enthusiast, antique tractor fanatic, and eternal optimist” died just before Edenfield left for college.

“I was a single mom for a long time and we are middle class. We don’t have a whole bunch of money to throw around at softball like some parents do and my dad was her biggest cheerleader and helped out a lot,” Powell said. “He was at every game. He was the videographer and he would go everywhere to follow that kid.”

Edenfield has family living very close by in Tallahassee. Her older sister, Aleisha, is pursuing a master’s degree at FSU to become a children’s librarian.

“She probably won’t admit it, but I would classify Michaela as a nerd like me,” Aleisha said. “She really loves to read and loves to play games and just enjoy herself when she doesn’t have to worry about softball and school work.”

Edenfield is also a whiz in the kitchen. She learned to cook early in life, and is known for her homemade ramen and baked goods.

“Her key lime pie is phenomenal,” her mom said. “It is a dieter beware because it is so good. It goes fast whenever she makes it.”

Sneads, with a population of around 1,800, has been following Edenfield’s rookie season with great interest. Many have driven to watch games, and she’s even turned some diehard Florida Gator fans into FSU softball supporters.

“I have gotten so many people locally contacting me about it. Her hometown is so stinking proud of that kid,” Powell said. “Seeing Michaela play, they think ‘Yeah, we can do this.’ Even if you are from a little bitty small town, you can make it there too.”

Edenfield has continued to wear her trademark makeup on the field. She gives pre-game tutorials on TikTok that include her teammates.

She has become more proficient as time has passed, and is happy to share any tips with others.

“Shout out to my mom who didn’t let me wear makeup outside until I practiced. She didn’t want me to look like an absolute clown,” Edenfield said with a laugh. “I am not saying I looked my best, but I didn’t look absolutely silly. Look good, feel good, play good.”

Throughout high school, Edenfield always tried to help others when they were bullied. She knew how it felt and didn’t want anyone to suffer through the same.

Given her bigger platform as an FSU player, she aspires to reach even more kids across the country. She wants them to find their inner-confidence and not let others define their self worth. They may not want to wear makeup, but they can find something unique to empower them.

“Nobody should be bullied or picked on,” Edenfield said. “I think sports in general has given kids a lot of opportunity to grow as people and counteract that bullying. I would love to be the voice to help in any way possible.”