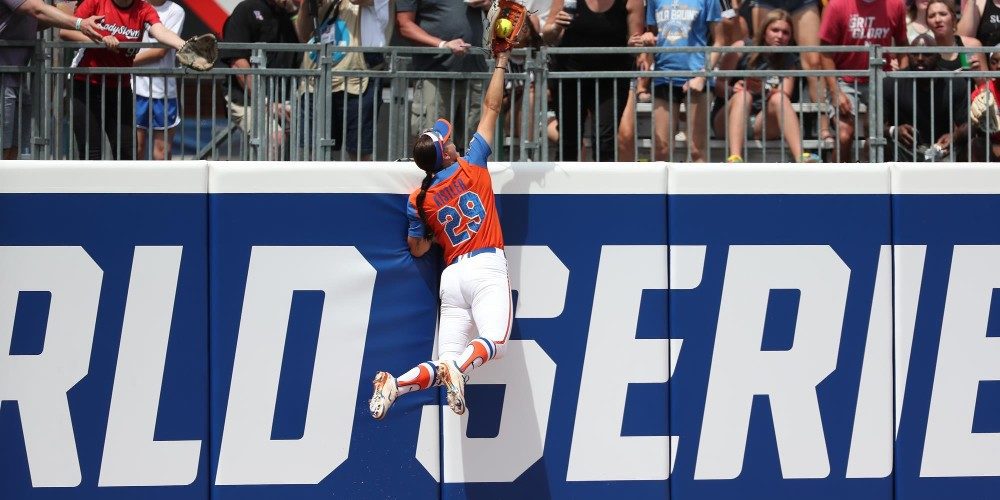 Katie Kistler noticed the butterfly fluttering around her in the outfield. Florida was on the verge of clinching a trip to the Women’s College World Series in the final game of the Super Regional against Virginia Tech.

Kistler’s dad, Jon, promised he would book the first flight to Oklahoma City if the Gators ever made it to the WCWS during her college career.

He never got the chance. Jon died last August after a battle with Covid.

Although he wasn’t present physically, Kistler knows her dad’s spirit was with her throughout the season. The butterfly confirmed her intuition. She spoke to it during the final innings of the game at Tech Softball Park in Blacksburg, Va.

Once she began celebrating with her team, Kistler shared a long hug with Florida head coach Tim Walton and told him about her dad’s presence.

“I was bawling my eyes out,” Kistler said. “I knew my dad was there, but I wish he was really there.”

Sunday will be an emotional day for Kistler and her family. It will be the first Father’s Day they celebrate without her dad. Kistler and her mom, Michelle, may visit him at the cemetery near their home in Orange Park, Fla.

“I always try to prepare myself for holidays, but I never know until the actual day of how it will go,” Kistler said. “When I see people posting about their dads, that is when it really hits me.”

Kistler and her dad were “best friends” who shared a similar personality and a love for softball. He was her first coach, and they spent nearly every weekend together during her childhood.

“Our bond honestly grew through softball,” Kistler said. “We would only talk softball and we always hit together and he would throw to me almost every day after off days from high school and stuff. He was the reason I played softball and the reason why I got to Florida for the most part.”

Kistler’s parents both contracted Covid last August. Her dad seemed fine during the first few days, but suddenly took a turn for the worse. He was struggling to breath and was eventually transported to the hospital.

“It was very unexpected too because he was a healthy guy. He had no problems at all,” Kistler said. “He was a little bit of a bigger guy, but right before that he was running on the treadmill everyday and active. It really came out of nowhere.”

Jon was placed on a ventilator, but did not show much improvement. The doctors decided to put him in a medically induced coma.

“I was really freaking out, because at that time a lot of people were passing from Covid,” Kistler said. “My brother also had Covid too. He was in Indiana and both my brother and dad were induced into comas and on ventilators. Everyone was scared.”

Although her brother recovered, Kistler’s dad didn’t survive. The nurses told Kistler’s mom his heart stopped a few times on the night of Aug. 10th, and Kistler began making plans to drive home from Gainesville to be with her family.

But before she could get into the car the following day, her mom called to say her dad had died. Kistler was in her apartment with some of her teammates when she received the news.

“They were hugging me and holding me. They called my mom and sister for me and tried to figure out what to do,” Kistler said. “I live an hour and a half away from here and it was like 9 at night and all of them took me and my car all the way home. They were there for me supporting me.”

The entire Florida team attended her dad’s memorial service. The Gators made the trip on a bus to be with Kistler and her family.

Once Kistler returned to the field to begin her sophomore season, she struggled to get through the first few practices.

“I try to be a really positive person, but the first weeks of the fall season was really, really tough for me. I will admit that,” she said. “I just kept seeing my dad through softball and it was hard.”

Kistler had a long talk with Florida assistant coach Aric Thomas that helped her begin to work through her grief.

“He pretty much told me to take the game and remember my dad through that. I should be playing for him,” Kistler said. “Coach Thomas and I have a really close bond and I felt comfortable talking to him about it. He and Coach Walton told me whatever I needed to please tell them right away, and I just took it one day at a time and tried to do everything for my dad and make him proud the best I could.”

Kistler ended up having a breakout season for the Gators.

After receiving only 11 at-bats and hitting .091 as a freshman, she hit .354 with 24 RBIs and 33 runs scored in 2022. Kistler had a perfect fielding percentage, with 103 putouts, five assists and several home-running robbing catches in big games.

“That is what I am most proud of,” Kistler said. “I could have easily just given up because I didn’t play last year. But I just took that and worked hard and was able to improve for my team. I am super proud I could benefit my team in any way I could this year.”

Kistler got a tattoo on her right arm in her dad’s memory with his birthday, angel wings and a halo. For the rest of her softball career, she will keep searching for a butterfly in the outfield.

“After every game, I did get sad honestly because I wished my dad were there,” Kistler said. “But every game I did well in, I was happy that he was watching me from the best seat.”