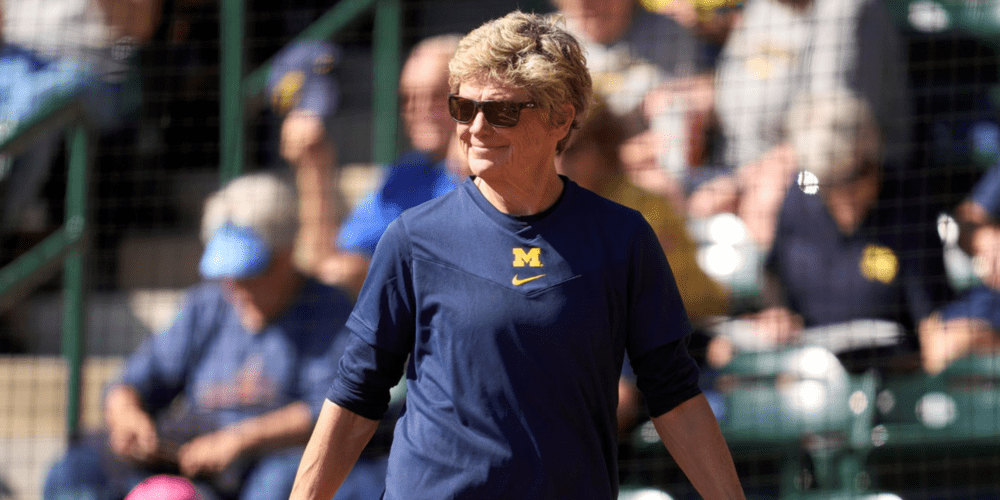 At some point Wednesday, the past became history in college softball.

Unlike news that Carol Hutchins, the winningest coach in Division I history, was retiring after 38 seasons at the University of Michigan, the end of the past and the beginning of history didn’t merit a formal announcement. The shift was almost imperceptible, something there one moment and gone the next, so that you aren’t even sure that it wasn’t just a trick of the light.

But it happened all the same. Hutch was present at the birth of college softball as we know it. She was the architect of a championship that ushered in unprecedented growth. Now, in leaving a sport changed in ways even she couldn’t imagine, she brings a founding era to a close.

As long as spring found Hutchins in the third base coach’s box, feet wide apart and hands on thighs as she scowled at the umpire, batter, pitcher or some other unfortunate soul, college softball’s past remained a living story. Mike Candrea, Sue Enquist and Sharon Backus, JoAnne Graf and Yvette Girouard might be gone from the dugout, but Hutch remained.

And not just hanging on, but harboring World Series aspirations while looking like she could play a doubleheader herself – able to go for a run on a typically sultry Tuscaloosa morning before a 2012 super regional, only to pause at the stadium and shag fly balls from Jessica Mendoza.

From now until eternity, or at least until the planet gets its last laugh, people will come along and find ways to do softball better. That’s the way it works in sports, as in just about everything.

One generation finds the inefficiencies, sacred cows and new data. They improve it – whether “it” is pitching strategy, crop yields or semiconductors. Then the next generation does the same.

But Hutchins is part of the generation that had to figure out how to do it in the first place. There is only ever one of those.

She made softball work in Michigan, for goodness’ sake. She made it work in the literal and figurative shadow of Michigan Stadium and Bo Schembechler’s football program. She made it work in a place where snow sometimes covered the outfield grass through spring break. She took on the sunshine and pedigree of Southern California and succeeded.

During a recent Athletes Unlimited game, Amanda Chidester answered a question about who she looked up to and watched growing up in Allen Park, Michigan. Her answer? Jessica Merchant, the unflappable shortstop on the 2005 national championship team.

Someone else will come along and take Michigan back to the World Series. They will recruit and mentor stars who inspire legions. But they won’t build something out of nothing in a way that reshaped what it was possible for a girl like Chidester to dream.

Hutch could make any writer, regardless of beat or experience, at least momentarily doubt their career choice. Ask a stupid question, and she would pause, eyes wandering skyward – seeking either a gift of patience or a lightning bolt from some higher authority – and answer with evident exasperation. In other words, about what the questions deserved (as someone who asked a few of them). But most of the time, she was a storyteller, acerbic in her honesty and rich in detail.

She lived everything in softball and had the stories to prove it. Long before the national television audiences, before there even was an NCAA-sponsored championship, she played for Michigan State in the AIAW version of the Women’s College World Series. She played with a $5 per diem, when players still occasionally used wood bats and nobody wore a helmet. She played a World Series game on a football field at what was then the University of Nebraska-Omaha, the softball field all but under water after heavy rains.

It rankled the hell out of her that all those World Series were cast aside, lost and ignored like softball’s Rapa Nui.

“The only opportunity we had to win a championship was AIAW, and it was as important and as real to me and my teammates as today’s championship is – And they don’t really count it.” Hutchins said a few years ago. “Before the NCAA, women’s athletics didn’t exist? It did exist. It was certainly not high profile, and the university didn’t really regard us, but everyone who was a student-athlete regarded themselves as an athlete and carried ourselves like athletes. We were in pursuit of being great.”

And yet she helped shape the empire that replaced it. The story of modern softball turns on a number of events, many centered on the final decade of the last century – the 1996 Olympics and the birth of SEC softball, moving the pitching rubber to 43 feet and implementing the yellow softball to boost offense, Patty Gasso’s arrival at Oklahoma and 2000 national title. But that story is incomplete without Michigan’s 2005 title, the first for a school east of the Mississippi and the first for a school from a northern climate (although it remains an outlier in that regard).

In the first best-of-three championship series, with record audiences tuning in, Hutchins and the Wolverines took down UCLA and took the sport national. When Sam Findlay’s home run sailed into the Oklahoma City night and Merchant caught the final out, the sport’s signature event was off and running as a staple of the spring sports calendar capable of drawing tens of thousands to Hall of Fame Stadium and millions on television.

Not because she was ahead of her time, although she certainly was in everything from splitting her pitching innings to shedding small ball.

Not because she won, although she certainly did that, too – dominating the Big Ten for decades and piling up 1,710 wins.

Not because she changed the lives of hundreds of women in ways that even they may struggle to explain, giving her players the tools and the confidence to emerge stronger people.

Softball will miss Hutch because she’s irreplaceable. Others will innovate. Others will win, even in cold places. Hopefully, others will remember to mentor, too. But no one at as high a level will be a living link to the past.

Whatever else Hutchins took with her when she left her office for the final time, she took that.

From now on, a part of the game is only history.