Lauren Chamberlain never thought she could replicate the feeling she had being on the field once she retired from softball. The former Oklahoma star struggled to find anything to fill the void that comes with leaving the game.

After nearly a year away, she may have finally found the closest substitute.

Chamberlain is the host of the new MLB Originals show “STACK’d,” which debuted Monday on the league’s YouTube channel.

“It’s the same adrenaline that I feel on game day if not more, which is crazy,” Chamberlain said. “It’s fun to show up like I am taking the field again and get that rush. I haven’t had that emotion since I played and it’s so rewarding.”

“STACK’d” is one of six new shows MLB is featuring in the MLB Originals programming series. A new episode of one of the shows is featured every Monday at 11 a.m. ET on YouTube.

“The MLB is making a big push to really connect with players on a different level. This show helps to showcase the personality side and really get to know them better off the field,” Chamberlain said. “Fans love the chance to learn more about the players and realize they are just like them in some ways. They see them as superheroes on the field, but they are just like us in many ways off the field. It’s easier to relate to them and I think that helps build a bigger fan base.”

Chamberlain, a MLB Youth Ambassador, had no prior hosting experience when she was approached about the opportunity.

The NCAA’s all-time home run leader created an audition tape and the producers liked what they saw. She was sent to spring training in Arizona to film some of the episodes before the coronavirus pandemic shut down all sports.

“I have always wanted to host a show. I just didn’t know what show,” Chamberlain said. “For this to happen, it checks something off my bucket list of life. I am eager to see where it goes.”

After announcing her retirement from softball at the Women’s College World Series last year, Chamberlain wrestled with finding an identity beyond the diamond. Her vision in life had always included being in a uniform and playing softball.

“Without a doubt, the fall was the worst time of my life. It was terrible, and anyone close to me can tell you that,” Chamberlain said. “It was a period of grieving a little bit and a period of mourning. I had been playing sports since I was 8 years old then just stopped.”

Chamberlain knew she needed to work through her emotions, and sought help for the issues.

“Therapy and talking with my support system worked best for me,” Chamberlain said. “I was making sure to stay busy, but I was experiencing anxiety or feeling restless. I was a little bit depressed. It was a weird feeling that I hadn’t really felt before, and it was all coming out in different ways. I didn’t have the mask of softball and something to do every single day and something to look forward to.” 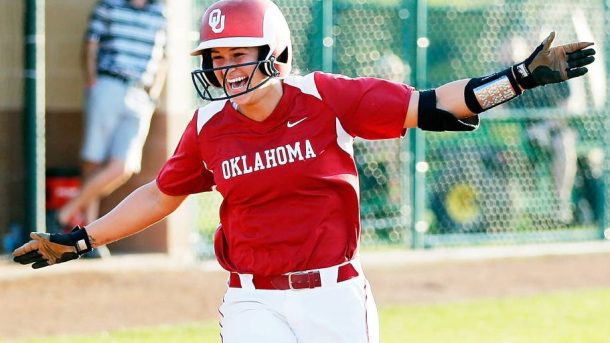 Chamberlain manages her own softball performance facility in Edmond, Okla. She was working with about 40 girls a week before the pandemic. In January, she joined Easton Fastpitch as an ambassador and collaborator.

“I am thankful to be able to stay in the sport. I don’t know how people transition into something completely different,” said Chamberlain, who was No. 1 overall draft pick in National Pro Fastpitch and spent four seasons with the USSSA Pride. “I had to realize it’s not the end of life, it’s just the end of that life. It is a huge adjustment, and I have been aching to try something and see what else I am good at. This new TV thing is really filling the hole.”

Chamberlain has benefited by being a star player in the social media era. She has 182K followers on Instagram and 72.3K followers on Twitter.

As the NCAA moves closer to giving athletes more financial power over their name, image and likeness, Chamberlain is an example of a softball player that could have likely capitalized.

“It’s a great tool to have. I never thought it would get as big as it has. But before you know it, things go viral,” Chamberlain said. “Doing the ESPN Body Issue helped for things to take off in different ways to get some really cool stuff to happen in life. Social media has been a huge asset for me.”

The recognition has made Chamberlain’s new platform with MLB Originals an even more mutually beneficial partnership. Once she stepped in front of the camera for the first time as a host, Chamberlain almost felt like she was digging into the batter’s box once again.

“When the camera is on and you have some big names across from you, it’s a pressure situation,” she said. “You have to nail the show, and it’s almost like you get that fix from it afterwards. I have room to improve obviously, but I am happy to get through that pressure.”