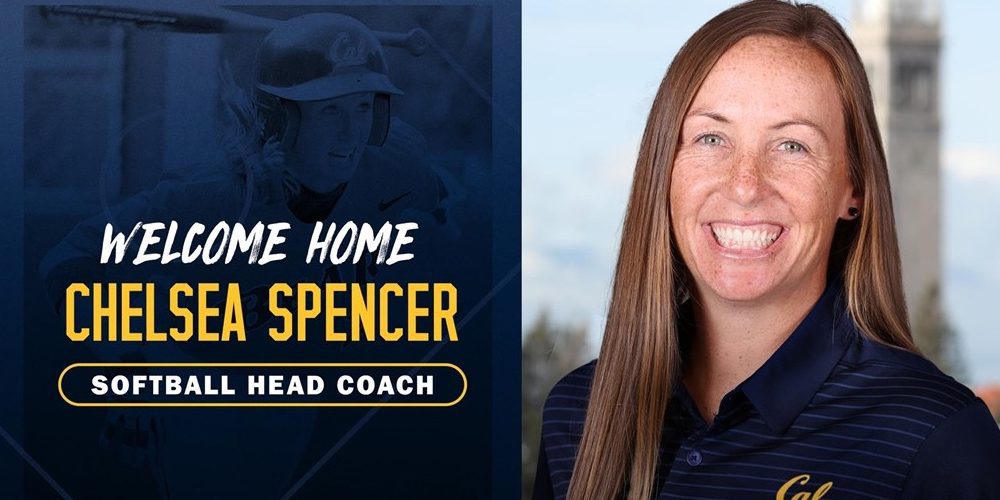 Chelsea Spencer has agreed to replace long-time head coach Diane Ninemire, who stepped down in early March after 32 seasons due to health concerns. The former All-American won an NCAA title during her career and started 277 consecutive games at shortstop. She returns to Cal after spending the past two seasons as an assistant coach at Texas and five seasons at Oregon.

“I am absolutely thrilled that Chelsea will be coming home to Berkeley to be the next head coach of our softball program,” Director of Athletics Jim Knowlton said. “As a player at Cal, she helped us to the very top of collegiate softball, and in the years since her graduation, she has continued to build for this opportunity to lead our team. Chelsea’s passion and enthusiasm for Cal and Cal softball continues to shine through. She brings a well thought-out, data driven approach to the game and has a clear vision for the future of the program. I can’t wait for her to get started.”

“I am very excited to return to Berkeley,” Spencer said. “As an alum and a Bay Area native, I have an immense amount of love and pride for this school and region. My experience at Cal was amazing and I can’t wait to come home. I want to thank the administration, Jim Knowlton and (associate athletic director) Gordon Bayne for entrusting me to lead this softball program into a new era. Go Bears!”

WHAT THEY’RE SAYING
Jolene Henderson / Cal Softball Class of 2013 – Two-Time NPF Pitcher of The Year
“When she shared her vision for Cal, it made me wish I could put on the Cal jersey again. I am excited to see Cal softball chase down new challenges on the field and in the classroom. Chelsea is inspiring on and off the field, and I look forward to watching that passion spread into the new era of Cal softball.”

Courtney (Scott) Deifel / Cal Softball Class of 2003 – Head Coach, University of Arkansas
“Chelsea knows what it takes to win at a high level. She has had a ton of success in her coaching career and was an integral part of some of the best teams in Cal history. Chelsea’s passion and pride for Cal and Cal softball resembles that of Coach Ninemire, and I am looking forward to seeing her lead the program.”

Mike White – Head Coach, University of Texas
“We are excited for Coach Spencer as she enters a new chapter in her coaching career. Ever since day one as my assistant, Chelsea has dreamed of being the next head coach at Cal. She is a loyal alum having grown up in the Bay Area, and her family are all from the area. It is truly a great story, and Cal is getting one of the top assistants in the country. We are sorry to see her leave, but this is an opportunity for her that she has been working her entire career towards. We wish her and her family nothing but the best and we will miss her dearly.”