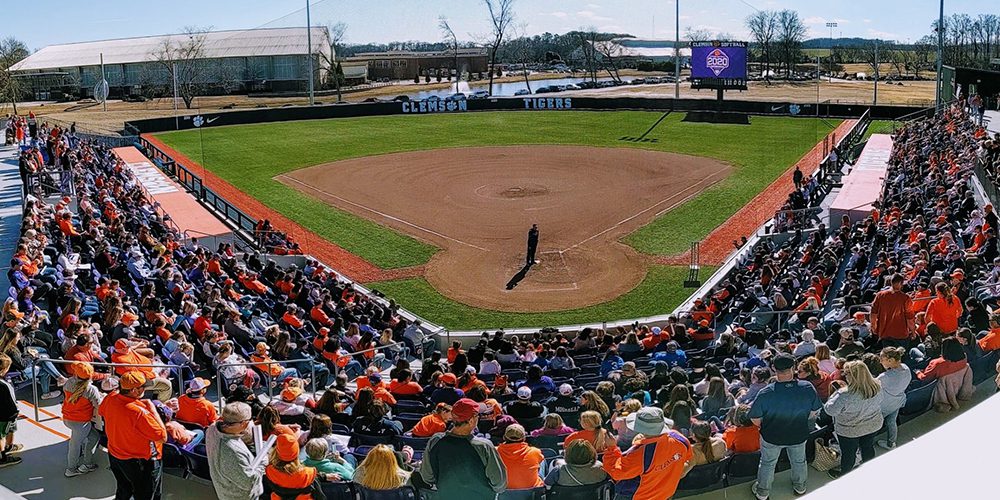 Clemson Has Historic Weekend Ahead

The players slipped into their uniforms and headed to the field for picture day. Clemson softball’s inaugural season was just around the corner, and the shortened countdown made the excitement even more palpable.

Every day presented a milestone for the Tigers, every action was being recorded as a first in program history.

Having watched a stadium being constructed right alongside their program, the players marveled as they stepped inside the completed $14-million facility. The Tigers didn’t need the photographer to prod them for cheesy grins. What they were experiencing in the moment was enough to elicit pure joy. Laughter ensued when Cammy Pereira made a comment intended to be a joke, yet tinged with a bit of realism.

“I said, ‘guys, this is going to be the picture that you see on the football field when we are 70 and walking off on our canes and gray hair and they are bringing us all in to recognize us as the first team,’” said the redshirt junior infielder. “But that was the first time it really felt really real to me. It really felt like we were a part of something special.”

After two years of hiring, building, practicing and waiting, Clemson softball is making its debut this season. The Tigers will play their first official game Friday against St. John’s in the UCF Black & Gold Classic.The program’s home opener is Feb. 12th with a doubleheader against Western Carolina.

Anticipation is high around the city and state of South Carolina. Season tickets were sold out within a month of going on sale, and Fan Day in late January attracted enough people to the stadium to fill the 1,000 fixed chairback seats.

“Clemson has such a rich athletic tradition and this community has really embraced softball,” said Clemson head coach John Rittman. “I have been out speaking to different groups in the last two years and the excitement the community has shown has just been phenomenal.”

Clemson becomes the 13th softball-playing member of the Atlantic Coast Conference, and second new program in the last two years. Duke began playing the sport in 2018. Wake Forest and Miami remain the only two ACC school’s without softball programs. 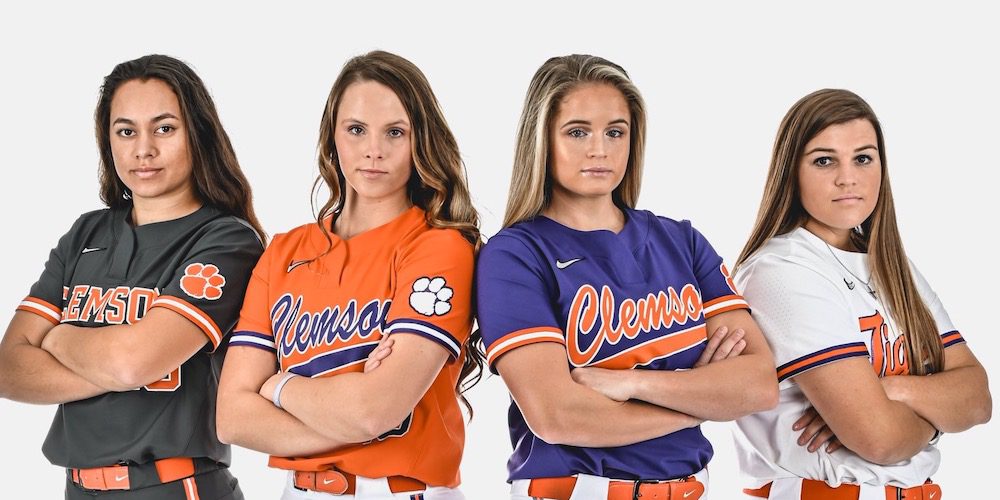 Since 2000, a total of 38 Division I softball programs have been added at the NCAA level.

Rittman jumped at the chance to be the first head coach in Clemson softball history. The former Stanford head coach and USA Softball staff member knew the university had the athletic resources to make the program thrive if constructed the right way.

“It’s not very often you get to take a job and start a program, and for me it was a great opportunity to build something from the ground up,” Rittman said. “It was really an honor to be asked to be the first coach, and I really took it as a challenge.”

Rittman had a little program-launching experience to rely on. He was an assistant coach at Washington when the program debuted in 1993. Times have changed and softball has grown by leaps and bounds, but some of the same core principles apply. Rittman didn’t want to have to replace an entire roster in four years, so he strategically built this season’s team with a mix of freshmen and transfers. Some players arrived in 2018 and spent an entire year practicing with the coaching staff while redshirting. The Tigers also held open tryouts and added a player from the university’s club softball team.

“The one thing that really benefited us the most was the NCAA transfer portal,” Rittman said. “To be able to use that in building this program was a huge help.”

Redshirt senior MK Bonamy transferred to Clemson from Notre Dame, where she started all 57 games at first base in 2018. She had a connection to the school – her godfather is football coach Dabo Swinney, who was teammates with Bonamy’s father, David, at Alabama.

“As long as I can remember, I’ve been a Clemson fan. But they just never had a program, so it wasn’t an option,” Bonamy said. “I graduated from Notre Dame in May and had my redshirt year, so everything just kind of fell into place at the right time.”

Pereira spent the last three years at nearby Furman University, and was a first-team All-SoCon selection last season for the Paladins. Having grown up in North Carolina, she always wanted to play in the ACC and Clemson gave her the chance.

“I set a goal for myself that I not only did I want to play at a higher level but also challenge myself as an athlete and a leader by coming here,” Pereira said. “I wanted to be able to help start something and build this from the ground up, because really everything is being built from the ground up.”

Although Rittman said the hardest part about the job has been the wait from the day he was hired in November of 2017 to actually playing the first game, he tried to use the period for self reflection and evaluation.

“It was an opportunity to really go back and look at how I have done things in the past and how I would like to maybe change things in the future,” Rittman said. “It enabled our coaching staff to slow down and really look at how we do things from a philosophical standpoint and from more of a day-to-day standpoint in building this program.”

Bonamy has tried to soak in all the lessons from the field, the cages and the clubhouse since she arrived. Even though she’s a redshirt senior, she feels very much like a rookie.

“The best thing has been learning every single day from our coaches,” she said. “There hasn’t been one day when I haven’t been mentally exhausted because I am literally learning something new. I appreciate that so much. It’s so rewarding for me as an athlete.” 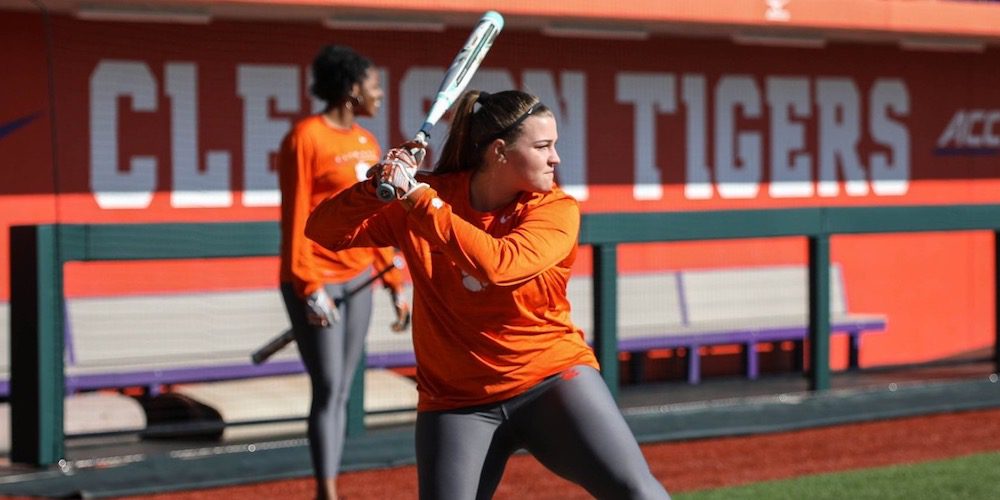 The Tigers have realistic expectations for the first season. They are playing to win every game, but understand there is a growth process involved.

“Our vision this year is really to build our culture through our core values and to give our players in this program a strong foundation so that we can be successful for years to come,” Rittman said. “There will certainly be some bumps in the road, but the pieces of puzzle are in place to help us achieve our goals.”

The Clemson players have enjoyed getting to know each other better in the last few months, and forging a team identity. Bonamy and Pereira are trying to memorize the names of every teammate’s siblings and quizzing each other about other biographical facts.While most programs have protocols in place that are passed down, the Tigers have a blank canvas to establish traditions.

How will they celebrate home runs? What happens if someone forgets a jersey on a road trip?

“Nothing has been set in stone,” Pereira said. “It’s really up to us to determine things, and that is exciting. We are all in this together and going through all of this together for the first time. Everything is brand new.”

The homepage for Clemson softball features a Countdown to Home Opener clock, with the days, hours and minutes ticking away. For as long as they have waited, Rittman knows the season will likely rush past in a blur. He’s been stressing to the players to enjoy the process. He recruited them on the chance to be pioneers, and be a part of history no matter what happens on the field this season. They are setting the foundation for future generations of Clemson softball players. That first team photo will be the one they show their grandchildren after their hair turns gray and they are leaning on canes during reunions.

“It’s been a very rewarding process and very fulfilling from a coach’s standpoint,” Rittman said. “To see the whole thing come to fruition and finally see the light at the end of the tunnel is going to be a very special day for us.”