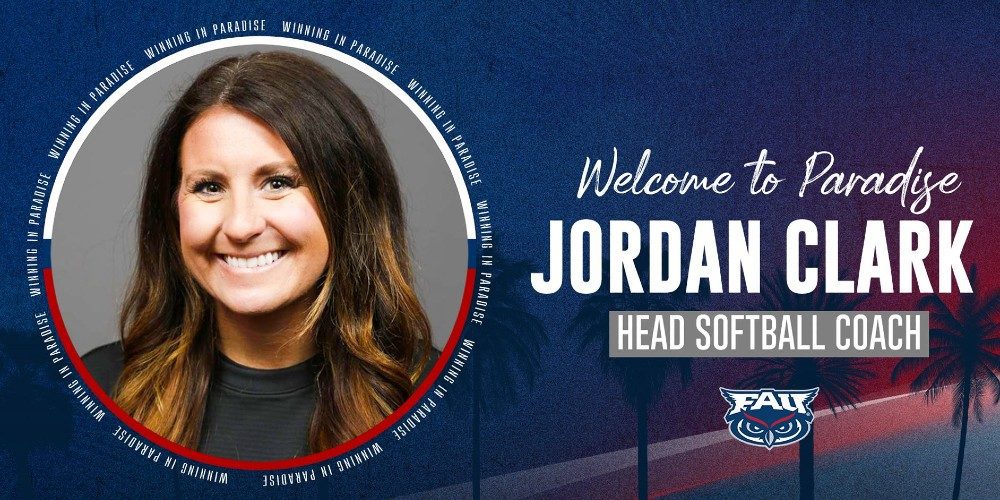 Jordan Clark was about to leave for a travel ball tournament during high school when she walked into the bedroom and saw her mom sitting on the floor rolling change.

Although her mom didn’t want to tell Clark why, she knew. Clark’s parents needed every extra dollar to help Clark pursue her softball dreams.

“I didn’t grow up with a lot. I am from a small town and neither one of my parents graduated from college,” said Clark, a Marion, Ark. native. “I played slow pitch softball until I was 14 and didn’t even know what fastpitch was. My parents didn’t know any different either.”

Clark, 32, rekindled those memories when she was hired as the new head coach at Florida Atlantic University in late June. The former Miami University standout takes over the FAU program after spending the last seven years as an assistant coach, including the last four at Ohio State.

“Everything you do, you want to impress your parents,” Clark said. “To see my dad have tears in his eyes once I got the job was such a surreal moment. It was like I did this, we did this. I owe my parents everything.”

Clark is only the second head coach in FAU history. She replaces the legendary Joan Joyce, who was in her 28th season at FAU when she died in March at the age of 81.

“Following in Coach Joan Joyce’s footsteps is absolutely intimidating and scary, but it’s also very rewarding to get to continue her legacy,” Clark said. “I am honored to build on what Joan Joyce did here and excited to get started.”

As she gets settled in the warmer Boca Raton climate, Clark sat down to answer a few questions for our Coaches in New Places series. (answers were lightly edited for length and clarity).

Why was this job appealing to you?

It goes all the way back to college for me. This is going to sound crazy and ridiculous, but I remember while I was down here playing thinking, ‘Wow. These girls live the life. This is where I have to get to.’ Fast forward to this year and we played here in the non conference and I heard the Ohio State players as they were getting off the plane saying “I wonder what it’s like to live here?” As silly as it sounds, that is what always sparked my attention with this place. I felt like it was sitting on a gold mine. I kept it in my head as a place that would interest me if I became a head coach. For recruiting, it’s a great location to recruit to, they are starting to pump money into the athletic program and the athletic director has a really good vision. The program hasn’t been to the postseason since 2016, but has the potential to be going yearly. It just needs some updating, some love and some attention. I feel like the sky’s the limit with this.

Did replacing a legend like Joan Joyce factor into your decision?

It’s been hard because there has been some backlash. The first day was really emotional for me in good and bad ways. It was the first head coaching job I had always dreamed of and so many people were so supportive and other people were really upset I got the job. I had this moment when I wondered, “Did I make the right choice? It is Joan Joyce and she’s had such a huge impact on this program and her players all remember the program with her leading it. But somebody has to go after her and it might as well be me. I hope I can slowly win over the alumni that wanted the hire to go in a different direction. You don’t want to let anybody down and you never take a job with an intention to fail or change it completely. I just want to try to make it better and do justice to what Joan Joyce created here.

How has the reception been among the returning players?

I just wish I could explain how phenomenal the administration has been and how phenomenal the girls have been. I’ve had players drive three hours with their families just to come and meet me and go to lunch and go to dinner. It really just tells me I did make the right choice to see how they have embraced me and welcomed me to the family. Change is hard and I called every player to have a conversation with each of them as soon as I was hired. I told them I was not asking them to embrace me from the start. I wanted to let them form their own opinion and really feel me out and what I need to do to help them. But I wanted each one to know I will love you as a person and build you up in that area and worry about the softball piece second. As long as they know that, we can start to try and build that trust. There were some who told me they didn’t want change, but were willing to give me a chance. That is step one and I admired their honesty. That is where it has to start.

How would you describe your coaching philosophy?

Being an assistant for seven years (at Arkansas and Ohio State), the most beneficial thing I could have done is see two completely different programs be successful in two completely different ways. I have a lot of energy and passion and I want to get to know my players as people, and I think it’s important that they get to know each other to play next to each other. Right from the jump, it’s not just the softball piece, it’s the team-building piece. They don’t all have to be best friends, but they need to figure out how to play next to each other. I want this team to be passionate, aggressive and confident. I think that comes with off-the-field preparations and on-the-field preparations.

What do you see as your biggest challenge?

I do think this new era of FAU softball is going to come with some challenges because it is going to be a little different style and a little bit different in the recruiting world. That could come with a little bit of criticism. But I think it’s about staying true to the vision and keeping the girls and everyone involved in the program with that vision. I don’t have all the answers and that is something I talked about in the interview process. You are getting a first-time head coach and if that scares you then maybe I’m not your person. But I am not afraid to ask for help from my mentors and hire the right people around me. I think the puzzle pieces are in place here with basically the whole team returning. So the actual play on the field and not having to piece together a roster will likely be the easier part. I do think the challenge is just the new era and trying to find our own identity and who we want to be.

How do you view the transfer portal?

I think it is a blessing. I think every student-athlete deserves to have the best four years of their life and coaches deserve to be happy as well. As long as it’s not abused, things can work out in everyone’s favor. I do think being a head coach and taking over a program, you can use it to fill in some holes if people graduated or left. It’s nice to know you have options if you want those options and don’t feel stuck in your first year. The other piece is if the student-athlete just isn’t happy it can become a cancer for the entire team that can infect the culture. Having that option to find a new home and be happy and move on helps everyone. I also know the team has to know they matter and have a little bit of a voice in it. I am not going in and trying to replace everyone. It’s important for them to feel valued.

What are your interests away from softball?

I definitely feel that self care is super important. I think in order to stay sane you have to have hobbies. I love to golf. I wish I was a little bit better of a golfer, but I am a golfer. I recently got into biking, so I got me a nice little bike to ride around. I can go up to 20 miles, so that is a win. I just love being outside and doing anything by the pool or the beach. I am not big into traveling to be honest. We do so much of it in the job that I am kind of a homebody and like to stay at home. This may not be super interesting, but I’ve torn two ACLs – one at 30 and one at 13 – and borken 10 bones. I am prone to injuries.