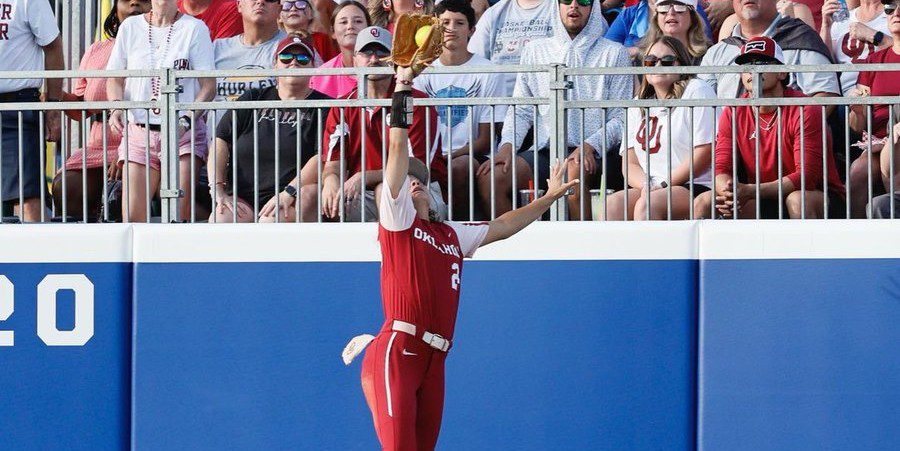 Jayda Coleman sized up the ball soaring through the night air, timed her jump perfectly and stretched her glove over the blue-padded outfield wall.

Oklahoma was in an early 2-0 hole in the first inning of a potential national title-clinching game and Texas was threatening to add more runs. But Coleman’s home run-robbing snare of Courtney Day’s deep drive ended the threat and gave the Sooners a needed jolt.

The OU sophomore put on a defensive clinic in center field on Thursday night as No. 1 Oklahoma defeated Texas 10-5 to capture the program’s second straight Women’s College World Series title at USA Softball Hall of Fame Stadium in Oklahoma City.

Coleman’s defense helped the Sooners stay within striking distance of Texas early until their explosive offense began scoring runs in bunches as usual to pull away.

Once she secured the inning-ending web gem, Coleman bounced toward the infield in celebration, pounding her chest as she pointed at OU freshman pitcher Jordy Bahl, who returned Coleman’s emotional fire with equal vigor.

“What’s crazy is that we practice that all the time,” Coleman said. “… It’s crazy that it actually showed up in a game when we really needed it. The best part of it is looking at Jo, and she’s just like, ‘Let’s go!’ That’s the best part of making the whole play, is seeing your teammates really excited for you.”

Coleman’s defensive superlatives started right off the bat and set the tone. The home run-robbing grab was one of two sensational catches Coleman made in the first inning as Texas loaded the bases with no outs. They kept the damage to a minimum and took some pressure off her rookie pitcher.

“I have seen Jayda do that over and over and over in practice, but when it’s in a game and she has your back as well as everyone else on our defense, that stuff fires me up more than any strike out ever will,” Bahl said. “It gives us momentum and really just lets me take a deep breath.”

As powerful as OU’s offense can be to mount comebacks, head coach Patty Gasso admitted to getting a little nervous when the ball cracked off Day’s bat.

“I was a little sick to my stomach for a second as I saw it getting some distance,” Gasso said. “If Jayda could get up on the wall and reach, she’s going to catch it, and I know that about her. She is an incredible, incredible athlete.”

But Coleman didn’t just settle for highlight-reel catches. She also showcased her arm.

In the fourth inning and the game tied 2-2, the lefty fielded a ball off the wall in the right center gap and fired a one-hop strike to second base to thwart J.J. Smith’s attempt to stretch the hit into a double.

One of the foremost experts in outfield play was watching all the action from home. Former LSU star AJ Andrews became the first woman to win a Gold Glove while playing for the Akron Racers in 2016.

“Jayda Coleman is electric in the outfield. The way she reads and tracks the ball with no hesitation just all out effort and keen on making the catch or making the play makes all the difference,” Andrews told D1Softball. “She knows what she is going to do and executes to perfection.”

Texas head coach Mike White pointed to Coleman’s highlights as lessons for his players on what’s required to take the next step and win a title.

“This is what you have to be. Look at the catches they made in the outfield. Look at the plays they made. The throw to second base,” White said. “Not only is Oklahoma a great hitting team, they’re a great defensive team. It’s hard to score runs. That’s what we have to learn.”

Coleman’s teammates all said they expect her to make sensational plays. They see her rob them of home runs on a regular basis. “Jayda is an animal,” said OU catcher Kinzie Hansen.

Yet even they had to marvel at Coleman doing it on the sport’s biggest stage with so much at stake and so many people watching. OU’s prolific offense may get most of the publicity, but the defense stole some of the spotlight when it was needed most.

“I told the team before we even started in this tournament defense plays a huge role,” Gasso said. “Now, hitting, timely hitting, pitching – but defense can make or break you. This tournament our defense made us.”