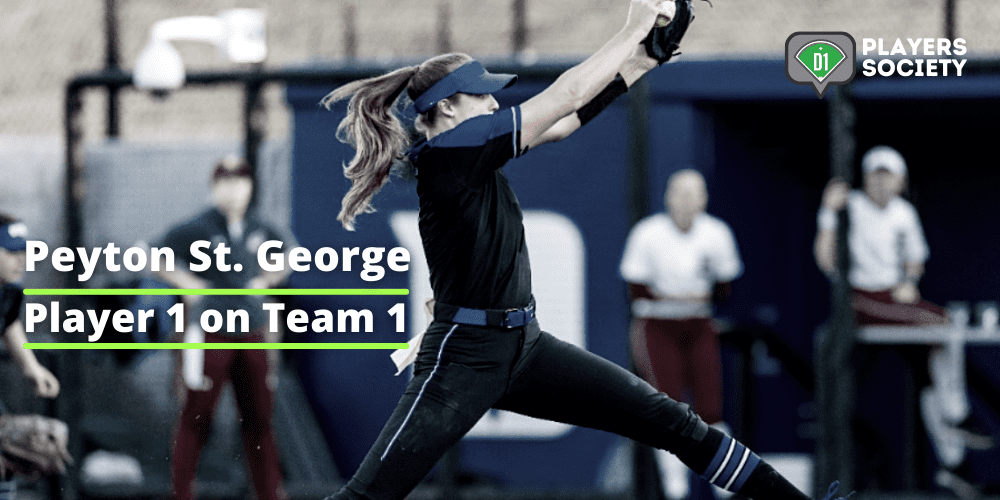 D1Softball, through the D1 Players Society, has partnered with Duke pitcher, Peyton St. George to bring you an inside look at how she became the first player for Duke Softball.

I vividly remember the day that my mom sprinted into my room and said, “Duke is starting a softball program, imagine how cool that would be to be on the FIRST TEAM EVER!”

In that moment, my immediate thought was how unattainable of a statement that was, that my mom was speaking the impossible. I was already very late in the recruiting process, hadn’t been pitching for very long, and still wasn’t quite sure how softball would play a role in my life and whether or not my future depended on it.

Duke announced their program in December of 2013, and I verbally committed on August 27th, 2015, less than a month after Coach Young was named the head coach.

My recruiting process, much like many other players, was filled with many weekends of late nights on the road, early mornings at the ballpark, hundreds of emails, phone calls, and many times, a lot of doubt about the future. Where would I end up? Did I play well enough this weekend to stand out? Am I too late in the process? Do coaches even read my emails? My dad and I spent most weekends of the year driving and flying across the country for travel tournaments and college camps, just to get me in front of the right people.

As a teenager, travel softball takes away a lot from your social life just to give you a chance to play at the next level. I wish I could have told my younger self that everything I was doing, everything that I was missing, was worth it. By the end of freshman year and into my sophomore year, I had a few options of schools that I was looking at and some visits I took, but nothing felt like home. Nothing felt like it was “supposed to.” My teammates were verbally committing left and right and my options were starting to get smaller as time went on. I didn’t know much about where I wanted to land the next four years, but I did know that the cold was not for me, so my options got even narrower.

The Phone Call That Changed It All

On a Sunday in early August 2017, my travel coach handed me the phone and said, “It’s Marissa Young on the phone, she wants to talk to you,” to which I laughed and replied, “…you’re joking.” At the end of a very short phone call, Coach had said she wanted to “build her program around me” and we had a visit set up for the next week. Obviously, for a fifteen-year old I was on cloud nine. I had just spoken to the newly announced head coach at Duke and the two hour car ride home from practice forcing myself to wait until I was in front of my parents to tell them was the longest ride of my entire life. Nowadays, a two hour car ride is all it takes to get from my home in Virginia to Duke’s campus.

When it came to my decision to go to Duke, there was never a choice. The answer was always yes. On my unofficial visit to Duke, I remember Coach Young walking us through Cameron Indoor Stadium, past the chapel, around the dining halls, and none of it felt real. Everything had aligned the way it was supposed to and I would have committed the second Coach called me if I had the chance. Nowhere else in the country would I have the opportunity to compete at such a high level on the field while also getting the best education in the world. There was never a doubt in my mind walking through campus that this school wouldn’t become my immediate home. I finally felt the feeling that everyone talks about.

From Official Visits to the Final Season

Officially committing and signing to Duke wasn’t a moment that I made bigger than myself because I knew that’s when the real work began. The easy part was done, and the hardest challenges were yet to come. I spent my senior year of high school working on my craft, excelling in travel tournaments as much as I could, and even left home two short weeks after graduation to begin my time at Duke early.

Heading into my final season, it’s inevitably super emotional to write about what being the first player ever means to me, as it should be. At the end of this season, hopefully in the beginning of June, I’m going to pack up my locker and leave the stadium for the last time. There aren’t enough words I could write to recap how much the past five years have impacted me. I know in the grand scheme of things, softball is going to be a very small portion of my life, but at the end of the day it has shaped who I am as a person without softball.

In four short years, Duke softball has created a championship culture from the literal ground up. The two other remaining players from the 2017 class of Team 1 can attest to the fact that it took a lot of growth, a lot of grit, and a lot of failure to get where we are. If you had told the three of us our freshman year that we’re a top 20 ranked team with an ACC championship, we may have thought you were a little crazy, but we would have never doubted you. As an early team, we always thought that we would never see enough success in such a short period of time to bear the fruits of a tree that we planted. A week away from the start of Team 5’s season, I can take what my pitching coach asked me as a fifteen year old to heart: “Do you want to go to a school to break records or set them?” Instead this time around, I’m going to break the ones that I set.

Four Down, One To Go

Having the honor of being the first ever Duke softball player I don’t think will truly sink in until I have left this incredible university and team. Being in the midst of it all makes it challenging to put things into perspective. Once my five-year career at Duke has come to end and is in my rearview mirror of life, it isn’t until then that I can honestly look at the very beginning of it all from a different point of view. Even as I sent out my commitment message to the world and typed the words, “first ever Duke softball commit”, it still carried a special weight that I won’t fully recognize until it’s time to hang up the cleats.

From the outside, it suddenly all became about setting records, meeting expectations, and living up to the pressures that Duke athletics holds in its standards. From the inside, it was never about me, it was about something so much larger than myself. The first is special for sure, but the first was the beginning of a group chat of two people that soon turned into eighteen and the rest is history. Personally, I never had anything to compare being player 1 of team 1 to, so I had to build my own experience around how I should act, feel, and play with that on my back.

My pitching coach in high school, Rick Pauley, had put everything into a great perspective for me right before my unofficial visit. He said, “Do you want to go to a school to break records or set them?” Fifteen year old me wouldn’t believe twenty-two year old me if I told her that we set some damn good records in four short years, with one more to go.

Make sure to follow the D1 Players Society on social media 👇