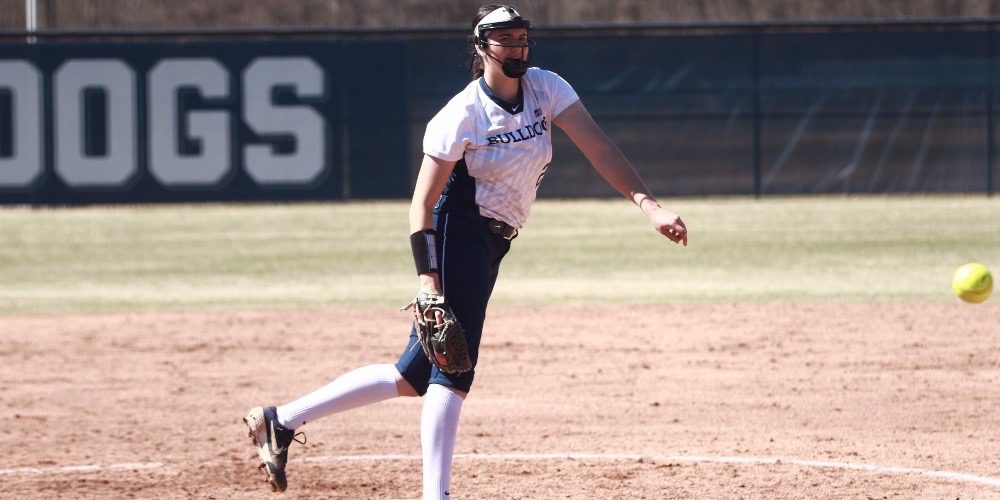 The Top 71-80 pitchers in the nation include a pair of Butler arms, an All-American and one freshman.

A duo of Butler hurlers lead off our next section of pitchers: Alyssa Graves (6-3) and Karli Ricketts (4-3). The pair led the Bulldogs to a 15-8 record throwing a combined 124.0 innings. Graves, a 6’1″ lefthander, possesses supreme pitch ability in this section (94.90) and recorded seven complete games in the abbreviated season. The junior racked up 81 strikeouts in just 13 appearances and was praised by pitching coach Stacey Goyette for her work ethic.

“Alyssa Graves adds something mental and mechanical to her pitching every year. Her own standards and work ethic won’t let her coast,” said Goyette. “She was attacking multiple zones with more than one high-velocity pitch. To compliment her velocity pitches, she throws a filthy change.”

Complementing Graves in the circle is sophomore, Karli Ricketts. The six-foot righthander punched out 88 batters in 2020, keeping opponents to a .195 average. The second-year starter showed vast improvement from her freshman campaign.

“We were starting to see what she was capable of towards the end of her first year and this year she kept her foot on the gas of growing her craft,” Goyette said.

Ricketts provided the highest score for zone control in this section (87.13) highlighting her ability to throw strikes, limit walks, and stay in the zone.

“She repeatedly got ahead in the count to allow the opportunity to work in a new pitch to further boost her confidence,” said Goyette. “And her control paid off as she stayed strong through high-pressure moments throughout the season.”

Checking in after the Butler duo is No. 73, Shi Smith from Seattle University. The Oregon native threw 64.2 innings for the Redhawks this season while facing some big-time opponents.

“She can be absolutely dominating striking out the side multiple times in a game,” said pitching coach Caitlin Nies, “This season it was really cool to see Shi pitch against some of the best programs in the nation. It felt like she was headed for a really special season before everything was canceled.”

Smith recorded a season-high 15 strikeouts against UC Davis and punched out 13 batters in the season opener against Northwestern. The junior has an arsenal of pitches relying predominantly on her rise but can mix in a curve, screw, and change up to keep hitters off balance.

“What we love about Shi is that she is a fearless competitor. She brings it every time she is on the mound,” she said. “She doesn’t give up a lot of back to back base runners because she is so good at refocusing and competing to get the next out.”

Closing out the 71-80 section is No. 76 is Duke’s Peyton St. George. The junior went (10-2) on the season with 2.05 and 1.07 WHIP. St. George through a complete game shutout against the Longhorns back on February 22 at McCombs field in Austin picking up their first win over a ranked opponent.

“Peyton dominates in the circle with elite movement and her ability to locate pitches in all parts of the zone with a great change up,” said Duke coach Marissa Young. “She worked really hard to increase her velocity while fine tuning her spin which allows her to go out and trust her stuff when she takes the mound. Peyton loves to be in those big games and we look forward to having her back the next two years to compete with that infectious fire she possess!”

For the full list of arms in this range, become a D1Softball Subscriber: