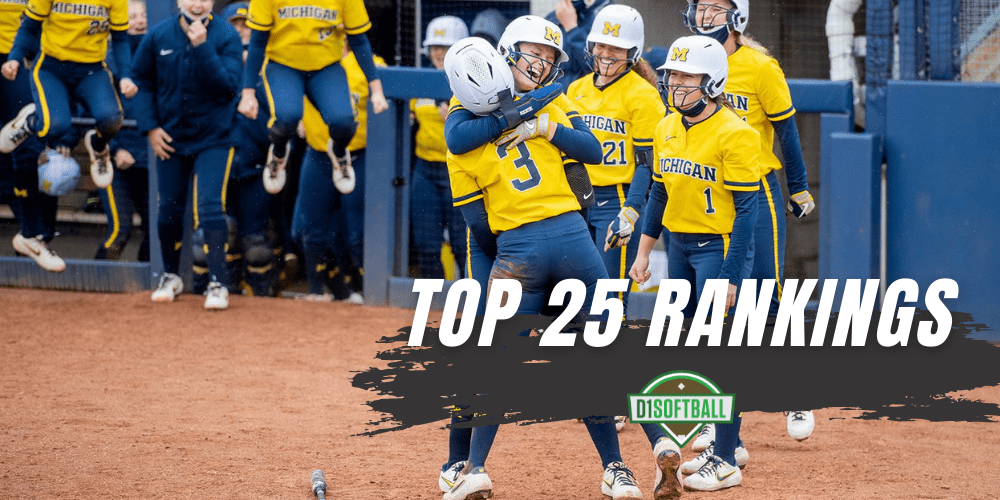 D1Softball Top 25 Rankings: Oklahoma Remains No. 1, Michigan On The Rise

The top two spots remain unchanged in the D1Softball Top 25 rankings for the 11th week in a row, as Oklahoma holds on to the No. 1 spot after winning its ninth straight Big 12 title. No. 2 UCLA holds strong after a 6-0 week.

No. 3 Florida jumps ahead of No. 4 Alabama, the two playing leapfrog every week, after an epic series sweep over Texas A&M in Gainesville. Washington remains at No. 5, while Oklahoma State remains at No. 6 after slugging it out with the Sooners in the Bedlam series. Arizona jumps ahead of Arizona State to round out the top 10. Yes, we know who won the head-to-head series, but ASU dropped two games to an unranked team this week.

Missouri remains at No. 12, while the newly crowned Big Ten champion Michigan jumps to No. 18.

The SEC leads all conferences with eight ranked teams, followed by the Pac-12 with five, the ACC with five and the Big 12 with three. The Big Ten keeps two teams in the Top 25, followed by the Sun Belt and CAA with one.