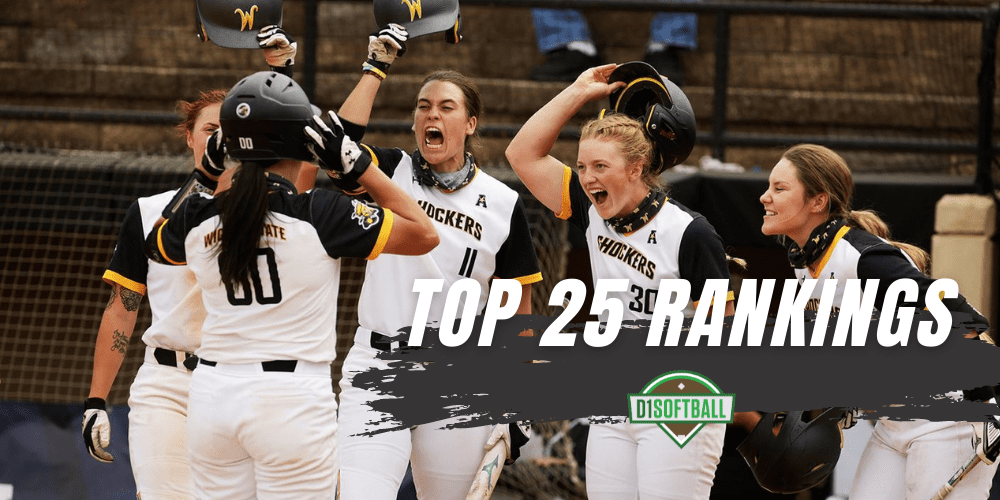 D1Softball Top 25: Oklahoma is the one; Wichita State Reenters Poll

Get 20% Off An Annual Subscription. Use Coupon Code: postseason21

What We Learned | Latest RPI | Bracket Challenge powered by WINReality

Oklahoma remains No. 1 in the D1Softball Top 25 rankings for the 12th week in a row after winning the Big 12 tournament, and No. 2 UCLA holds strong after going 3-1 on the road at Arizona.

No. 3 Alabama jumps ahead of No. 4 Florida, the two playing leapfrog seemingly every week after the Tide won an epic SEC tournament at Rhodes Stadium. Oklahoma State moves to No. 5 after slugging it out with the Sooners for the second week in a row. Washington drops to No. 7. Arizona rounds out the top 10 after taking a game from the Bruins.

The SEC leads all conferences with eight ranked teams, followed by the Pac-12 with five, the ACC with four and the Big 12 with three. The Big Ten keeps two teams in the Top 25, followed by CAA with two and the Sun Belt with one.