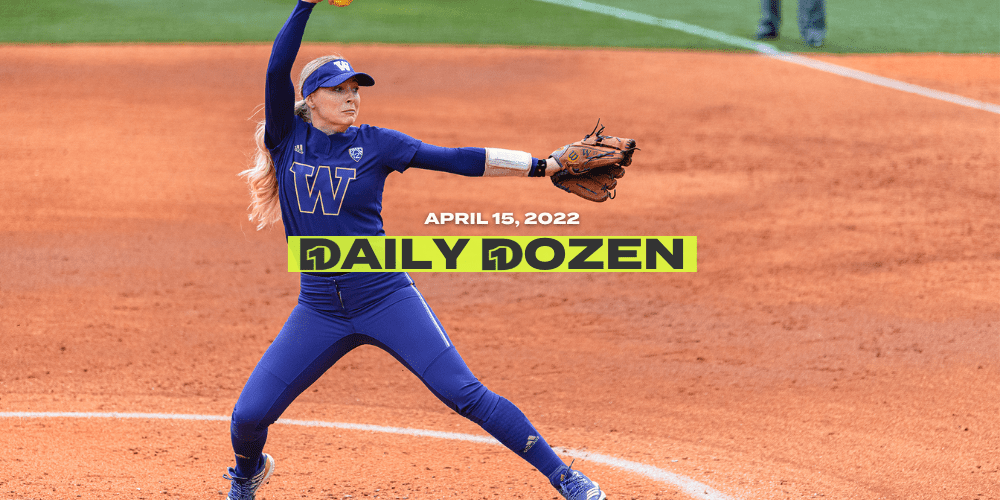 1. Virginia Tech falls to Virginia. The University of Virginia program has shown clear signs of progress this season. But the Cavs were still searching for the big breakthrough win. They got it against their in-state rival. UVA upset No. 3 Virginia Tech 5-3 in Blacksburg to even the Commonwealth Clash series at a game apiece. UVA snapped a 13-game losing streak against the Hokies (31-6, 14-2) by overcoming some nervous moments in the seventh. Virginia Tech’s only previous ACC loss came against Florida State last weekend. UVA’s Molly Grube nearly went the distance in the circle, but was removed with two outs in the bottom of the seventh after a bobble by second baseman Arizona Ritchie allowed a run to score and brought the tying run to the plate. Reliever Madison Harris walked Kelsey Bennett on four straight pitches, but got Emma Ritter to ground out to Ritchie for some redemption. Grube gave up eight hits with five strikeouts and no walks in 6.2 IP. Emma Lemley took the loss for Virginia Tech, giving up five earned runs on nine hits with eight strikeouts and three walks. UVA scored three runs across the fifth and sixth innings to provide the cushion it would need. Gabby Baylog and Katie Goldberg hit solo home runs for UVA, which got RBIs from five different players.

2. But Alabama rises to the occasion. Lexi Kilfoyl didn’t feel well enough to make her start on Friday, Alabama instead giving the ball to Jaala Torrence. Mississippi State jumped out to a 5-0 lead with the help of a two-run home run from Mia Davidson. Luckily for the Tide, Alex Salter stepped up in a big way in relief. In 5.1 innings, she only surrendered one unearned run, giving her bats a chance. Kaylee Tow hit a home run in the bottom of the second, but the homers didn’t start raining until the sixth. Still down 6-1, Baylee Dowling hit her eighth home run of the season. Jenna Lord followed with a two-run bomb for her first career homer. Then in the seventh, Ally Shipman drove a ball deep down the line to pull the Tide within one. The next three batters all reached to load the bases for Megan Bloodworth. The freshman put a barrel on it and found a soft spot in the outfield for the walk-off two-run double.

3. Delce was dealing again for Hogs. It figures that two of the SEC’s top offenses would combine for only three runs in their series opener. That’s a credit to the great pitching of Arkansas’ Chenise Delce and Kentucky’s Sloan Gayan and Tatum Spangler. Delce pitched a six-hitter with nine strikeouts to lead No. 6 Arkansas to a 2-1 win over No. 12 Kentucky in Fayetteville. The redshirt junior transfer got all the help she would need on an RBI double by Danielle Gibson in the first inning and a home run by Hannah Gammill in the fourth. The homer pushed Gammill past Gibson for the team lead in home runs with 15. Gayan and Spangler combined to give up six hits with three strikeouts and three walks. Most other days that would be enough for Kentucky to pull out a victory, but Delce held the Wildcats down for her fourth straight SEC win after recording all three wins against Auburn last weekend. Arkansas (.345) and Kentucky (.340) entered the series ranked No. 1 and 2 in the SEC in batting average, No. 2 and 3 in RBIs and No. 3 and No. 4 in runs scored.

4. Holloway bounces back, no-hits Clemson. Alexis Holloway was the last pitcher in the circle in the series opener on Thursday as Clemson rallied for a walk-off win. She came back a day later and got her revenge. The Notre Dame graduate senior threw a no-hitter to lead the visiting Irish to a 4-0 win over the No. 17 Tigers. Holloway finished with six strikeouts and three walks in 101 pitches for her third career solo no-hitter and first that went a full 7.0 innings. She was aided by some strong defense, including an impressive pick and stretch by Karina Gaskins at first for an out. The Irish used three straight doubles in the fourth inning to take a 2-0 lead on RBIs by Abby Sweet and Gaskins. They took advantage of mistakes by Clemson – a miscommunication that allowed an infield fly to drop and a throwing error to first – to tack on two more runs in the fifth. The rubber match is Saturday at 1 ET.

5. Oklahoma had a near-miss Friday. By which we mean that the Sooners narrowly avoided playing more than five innings in back-to-back games for just the second time this season. But a night after needing to go the distance to beat Texas in the series opener, top-ranked Oklahoma returned to business as usual by scoring six runs in the fifth inning to secure a 9-1 run-rule victory. The Sooners hit multiple home runs in a game for the 28th time this season, thanks entirely to Alyssa Brito. The Oregon transfer who never played for Mike White in Eugene haunted him nonetheless with two more home runs against the Longhorns. She now has three in the series and four in her past three games. The Sooners simply never stop. Make it 40 in a row, matching last year’s team for the third-longest winning streak in Division I history.

6. Kelly Maxwell generates a lot of wind power. In fact, No. 8 Oklahoma State probably could have powered the lights in Stillwater if it could have harnessed the breeze from swings and misses against its ace. Maxwell struck out a career-best 18 batters in her team’s 6-0 victory against Kansas. Her previous career high came earlier this season, but she needed nearly 10 innings to strike out 17 on that occasion. She didn’t need any overtime Friday. She struck out the side in the first four innings, with 11 of 12 strikeouts swinging. In all, 15 Kansas batters struck out swinging. And according to the NCAA record book, Maxwell came within a strikeout of matching the best seven-inning strikeout performance in a game between Power 5 teams.

7. Another Kelley and another set of Ks. Kelley Lynch came to Washington with high expectations. While we’ve seen the highs at the plate, we’ve waited for the premier outing from her in the circle. It arrived Friday. Lynch’s rise ball was working against Oregon State. She struck out 15 batters, blowing past her previous career high of 11. And each pitch came with pressure. Washington’s offense only gave Lynch two runs of support, courtesy of Baylee Klingler’s two-run double. Lynch gave up a solo shot to Frankie Hammoude in the fourth to make it 2-1. Savanah Whatley opened the sixth for the Beavers by doubling and reaching third on an error. With the tying run on third and no outs, Lynch induced a pop-up and struck out the next two batters, including Hammoude. Lynch finished her career night with two more Ks in the seventh.

9. Louisiana shows why it holds the Belt. The Ragin’ Cajuns started their conference season on a rough note with a loss to Georgia State. They haven’t hit many bumps in the road since against the Sun Belt. Louisiana faced its top three conference competitors the past three weekends: Texas State, Troy, and South Alabama. After winning five of six against Texas State and Troy, sweeping this week’s series at South Alabama by sweeping Friday’s doubleheader completes the statement. They took the first game by scoring seven unanswered runs without a home run in a 7-1 victory. Five starters had at least two hits. In the nightcap, South Alabama ace Olivia Lackie shut out the Cajuns for five innings. But Samantha Graeter slammed the game-tying homer to open the sixth. Then Kayla Falterman, the No. 9 hitter, doubled, stole third and scored the eventual winning run on a fielder’s choice. South Alabama made it interesting, loading the bases with two outs in the seventh. But Sam Landry got the dangerous Victoria Ortiz to ground out to secure the sweep and sole possession atop the Sun Belt.

10. You need at least one trombone player involved for a play to rank among the strangest endings in the Cal-Stanford rivalry. But Friday’s frantic final moments on the softball diamond were distinctly out of the ordinary. No. 25 Stanford scored three late runs to force the game to extra innings, then appeared on the brink of a victory after taking a 5-4 lead in the top of the 10th inning. But after Cal tied the game on Amani Bradley’s RBI double in the bottom of the inning, Bradley scored the winning run when the Cardinal botched a rundown between third and home. The unusual walk-off clinched the series for Cal and may drag Stanford closer to the bubble than it expected to be amid the elation of last week’s wins against UCLA.

11. USC Upstate gets smacked upside the head. USC Upstate began the day with the nation’s best winning percentage (.929) among the non-Oklahoma portion of Division I. The Spartans hadn’t lost since March 20. They had outscored opponents 56-2 in April. You see where we’re going with this. It’s all a way of saying that Charleston Southern’s 16-0 victory against Upstate was, uh, unexpected in its scope. CSU’s Lilly Bishop led the onslaught with five RBIs, but five players had multiple RBIs. Upstate may be able to shake off the worst defeat since the program moved to Division I more than a decade ago, but the result allowed Longwood to pull into a tie atop the Big South standings. Both teams are 13-3 in conference.

12. Another SEC home run derby. For the second straight week, SEC teams used the long ball to score every run in a game. Missouri defeated Georgia 6-2 to even the series at Mizzou Softball Stadium, and all eight runs were scored via a home run. The teams combined for seven home runs, with Missouri hitting four, including two solo shots by Jenna Laird, and Georgia hitting two. Last Friday, Arkansas beat Auburn 7-4 with all 11 runs scored on home runs. Aside from giving up the two homers, Missouri pitcher Jordan Weber held UGA’s dynamic offense in check. Weber allowed just three hits in 7.0 innings with two strikeouts and two walks. Mizzou pinch hitter Megan Moll provided the final home run of the game, a two-run shot in the sixth that was only the fourth home run of the junior’s career.

Bonus: The Big Ten and Pac-12 leaders stay undefeated in conference and extend win streaks. Nebraska and Arizona State have scored a lot of runs and won a lot of games late. The Cornhuskers opened their Easter weekend series against Minnesota with a 7-0 win. Homers from Cam Ybarra and Sydney Gray pushed Nebraska to 11-0 in the Big Ten, the lone undefeated team, and extended the team’s overall winning streak to 16 games. Arizona State’s steak is 19 in a row after topping Utah 12-2. The Sun Devils used a lot of long balls to reach 11-0 in the Pac-12. Alynah Torres hit a pair, Cydney Sanders hit one and had three RBIs, and pinch hitter Mailey McLemore belted one out.

More bonus: Much of the nation was likely slumbering by the time No. 24 San Diego State and Boise State wrapped up their 13-inning marathon, but the Aztecs made their late night worth it with a walk-off win to level the Mountain West series. Taylor Adams delivered the big hit in the 3-2 victory. San Diego State is now assured at least a three-game lead on the rest of the conference, regardless of what happens in the series finale. Imagine how different things might look if not for Friday’s extra-inning drama and last week’s 11-inning win at UNLV. It pays to play to the end.