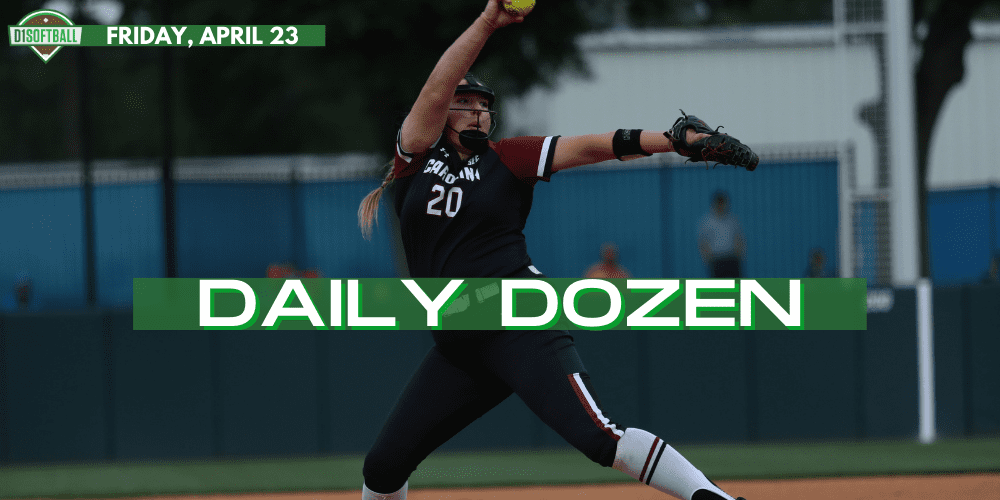 1. The NCAA announced it will allow up to 50 percent fan capacity for this year’s Women’s College World Series in Oklahoma City. The attendance policy was based on the recommendations from the NCAA COVID-19 Medical Advisory Group, and applies to all NCAA championships being held in the spring. Exact capacity percentages will vary by site, depending on state and local health mandates. COVID-19 testing protocols will remain in place for all championship events. Once finalized, venue capacity and ticket availability announcements will be made for the WCWS. All attendees will be required to wear face coverings and observe physical distancing in pods during championship events.

2. The list of 25 finalists for USA Softball Player of the Year released Friday includes representatives of the schools you expect in any season — Alabama, Arizona, Florida, Oklahoma, UCLA, Washington, etc. But it also includes Clemson’s Valerie Cagle and Duke’s Deja Davis, which would be a very strange sentence for anyone transported here from even a decade ago. It’s a sign of how quickly Clemson and Duke have settled in, and how wise they were to hire John Rittman and Marissa Young, respectively, that the two ACC teams are keeping this kind of company. Here’s the full list.

3. Leah Powell pitched the best game of her young college career to end a lengthy South Carolina losing streak. The freshman threw a four-hitter as the Gamecocks upset No. 3 Florida 2-1 for their first victory over the Gators since 2013 and first in Gainesville since 2002. Florida (33-7, 12-4) had won 40 of the last 41 games against the Gamecocks (24-18, 3-13) entering the series. Powell had four strikeouts and three walks in pitching only the fourth complete game of her career and only her second seven-inning complete-game. The Georgia native was cool under pressure, escaping a jam in the bottom of the seventh to strand two Florida runners on base with the final out.

4. Briana Perez blasted a towering three-run home run in the bottom of the third inning to stake No. 2 UCLA to an early lead en route to a 6-1 win against visiting No. 4 Washington. And for the second time this week in college softball, a significant streak came to an end. Days after Georgia ended Oklahoma’s winning streak, Perez and the Bruins ensured Gabbie Plain’s program-record 23-0 start also came to a close. With a long series ahead, Washington’s Australian ace threw just three innings in the loss. Rachel Garcia picked up her eighth win of the season by throwing a complete-game three-hitter and allowing only an unearned run.

5. Behind a one-hitter from redshirt junior Taylor Roby, Louisville snapped No. 6 Florida State’s 16-game winning streak with a 5-1 win to split the doubleheader. All of FSU’s wins in the streak had come in ACC play. Roby (10-9) gave up no earned runs, throwing 91 pitches with three strikeouts and two walks. In FSU’s 10-0 win in the opener, FSU redshirt junior Sydney Sherrill became the ACC’s career leader in doubles with her 59th in the series-opening win against Louisville. Sherrill belted her record-breaking double in the third inning and then added another in the sixth inning to drive in two runs. Because of weather, the teams will rest on Saturday before playing another doubleheader to finish the series on Sunday.

6. Entering Friday, Northwestern hadn’t beaten Michigan since 2016 — and it needed 13 runs to get that win. It didn’t need quite that many with Danielle Williams in the circle. Northwestern’s ace lost a no-hit bid late in the series opener in Ann Arbor but was otherwise dominant in a 4-1 win. Taylor Bump’s solo home run was one of only two hits by the Wolverines. It was Michigan’s first home loss since May 6, 2018, a stretch of more than 1,000 days. Michigan’s loss and Minnesota’s win against Iowa moves the Gophers to within .007 points of first place.

7. Notre Dame’s Alexis Holloway outdueled Virginia Tech’s Keely Rochard to help the Fighting Irish beat the Hokies 2-1 in the series opener. It was the first of two wins Friday for the Fighting Irish, which means Virginia Tech won’t win an ACC series for the first time this season after winning the first seven. Rochard (20-5) allowed seven hits, but neither run was earned and she struck out 10 batters. It was good week for Holloway on and off the field. The aerospace engineering major and her classmates are building a remote-controlled airplane that took flight this week. Holloway wants to design planes, helicopters or space vehicles once her softball career ends.

8. Yes, Courtney Vierstra did it again. Miami’s Brianna Pratt gave up one hit in her stint against Toledo in MAC action. That just isn’t going to cut it. We kid because that hit in four shutout innings was the only hit Miami pitchers allowed while sweeping a doubleheader. And yes, that means Vierstra was back at it. She wasn’t perfect, allowing four walks, but she threw her fourth no-hitter of the season. Granted, we’re still a long way from Michelle Granger’s NCAA single-season record of nine no-hitters in 1993, but four before the end of April is impressive enough for us.

9. We mentioned USF’s small ball against Wichita State’s power would make for a nice style contrast this weekend. Then USF’s Kyndall Williams went out and hit her second home run of the season in the first inning of the series opener. So much for that. Even the eventual winning run in USF’s 2-1 triumph came after a Brooke Hartman double. The Bulls didn’t totally depart from the script — AnaMarie Bruni stole her 31st base of the season and Georginia Corrick shut down the Shockers with a two-hitter. USF is now 10-2 in the league, still trailing Wichita State’s 14-2-1 mark.

10. Hanna Delgado provided perhaps the longest walk-off hit in softball history to beat Stanford on Friday, a single that took nearly 25 minutes. It turned out to be a lifeline the suddenly scuffling Ducks needed. How did all of this come to pass?? Delgado appeared to seal a win in the opening game of a doubleheader with a walk-off single in the bottom of the seventh inning. But as her hit bounced high over the first baseman, the first base umpire signaled a foul ball. Both teams nevertheless continued the play to its natural conclusion, with Hannah Galey crossing the plate for an apparent 2-1 win. But with Stanford players waiting on the field for much of the time, it took umpire nearly half an hour to determine that the run would stand. That win proved all the more precious after Alana Vawter tamed the Ducks in Stanford’s 3-1 in in the nightcap. Oregon has lost seven of nine against Pac-12 opponents.

11. The pitching lines between Tennessee’s Ashley Rogers and Georgia’s Mary Wilson Avant looked similar. Both gave up five hits and struck out six batters. But Rogers (20-5) had another Ashley in her corner and didn’t walk a batter. Ashley Morgan drove in two runs to help the Lady Vols beat Georgia 3-1 in the series opener in Knoxville. Georgia’s only run against Rogers was unearned and came in the first inning when Savana Sikes scored on a passed ball. Morgan tied the score with a home run in the second and added an insurance run in the fifth on an RBI double after Ally Shipman gave the Lady Vols the lead with an RBI triple.

12. You think you had a long Friday? Try being any Hartford hitter not named Danielle Rocheleau. While Rocheleau had three hits against Albany, the rest of her team went 1-for-35 against Albany’s Wendi Hammond. Her complete game effort kept Albany in the game long enough to pull out a 1-0 win in 12 innings. …

Bonus: Arizona didn’t need much help dismissing Utah in a 12-1 run-rule win, but the Wildcats (and college softball fans generally) had to be thrilled to see Alyssa Palomino-Cardoza back in the lineup after only a week’s absence. With all the bad luck she’s endured with injuries through her career, she was due at least some good fortune with her most recent knee injury suffered in the Arizona State series. Jessie Harper welcomed her back by moving into a tie with former Wildcat Stacie Chambers for fourth on the NCAA all-time home run charts.