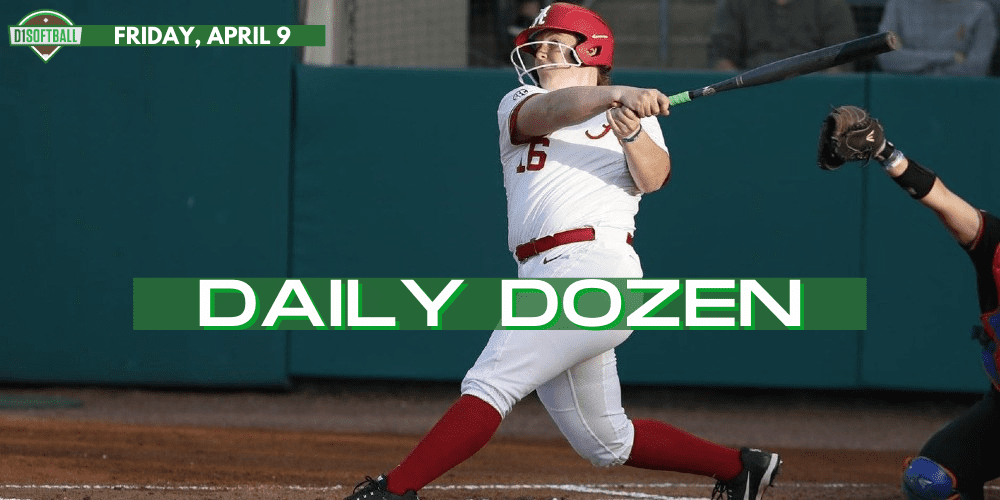 1. Nobody remains unscathed in the SEC. No. 4 Alabama (30-4, 10-3) handed No. 8 Arkansas (32-4, 12-1) its first conference loss of the season, defeating the Hogs 5-3 in the series opener at Bogle Park. The Tide jumped out to a 4-0 lead with four runs in the third inning, highlighted by senior Bailey Hemphill’s two-run home run – the 58th of her career. Montana Fouts largely kept Arkansas’ powerful lineup in check, throwing a complete-game five-hitter with 12 strikeouts. Fouts also issued six walks, and her throwing error in the third led to all three Arkansas runs being unearned. The Hogs – making their first appearance in a top 10 matchup in program history – left the bases loaded in the fifth and sixth inning, but Fouts escaped the jams with a strikeout and ground out. Arkansas pitcher Mary Haff (18-3) suffered just her third loss of the season, allowing five earned runs on six hits over 3.2 innings. Jenna Bloom tossed 3.1 innings of scoreless relief. Arkansas’ 12-0 start in SEC play was by far a program best, exceeding a 5-0 start in 2009.

2. Second-ranked UCLA (19-2, 3-1 Pac-12) has only lost twice this season, but it’s been to the same opponent. No. 3 Oregon welcomed the Bruins back from their two-week Covid pause with a 3-0 victory at Jane Sanders Stadium. Brooke Yanez threw a two-hit shutout and Allee Bunker broke a scoreless tie with her two-run home run in the fourth inning to lead the Ducks. Megan Faraimo, who entered the week with a 0.70 ERA, suffered the loss for UCLA. Yanez improved to 14-0 by striking out eight and walking just one in her fourth seven-inning shutout of the season. UCLA Olympian Bubba Nickles is out of the lineup after suffering a wrist injury. Oregon freshman Alyssa Brito made an impact on offense and defense for the Ducks in her return to the field after missing the previous weekend for undisclosed reasons.

3. Natalie DenHartog, Amber Fiser, MaKenna Partain and Autumn Pease. Minnesota won the series opener at Northwestern the way you would expect Minnesota to win a big game. It just took a little extra time. DenHartog and Partain hit home runs, Fiser matched Northwestern’s Danielle Williams pitch for pitch for more than 150 pitches each through the first nine innings, and Pease closed out the 3-2 win with a calm 10th inning. Perhaps the only surprise role went to Sydney Strelow, who drove in the eventual winning run in the 10th after striking out three times against Williams.

4. Tuesday, Texas State got the best result of its 18-game winning streak when it outlasted Texas A&M. Friday, the Bobcats lost for the first time since March 3. Losing 3-1 to South Alabama isn’t the biggest surprise of the season, even at home. But it came when South Alabama started Allie Hughen instead of freshman de facto ace Olivia Lackie, which moves the surprise meter up at least a few levels. Then again, Hughen was a tough-luck loser against Louisiana and pitched solid innings against Georgia earlier this season. She allowed just three hits in seven innings.

5. Miami’s Courtney Vierstra narrowly missed out on her second perfect game of the season because of a hit. Not a hit off an Akron bat, mind you — Vierstra still got her second no-hitter of the season. But Vierstra was denied perfection when she hit the leadoff batter with the very first pitch in the bottom of the first inning. She still faced the minimum after that runner was thrown out trying to steal. She struck out 12 of the other 14 batters she faced. Among our favorite stats of the year is that after giving up 10 earned runs on opening day, Vierstra has allowed just 16 in 60 innings since.

6. Perhaps the only surprise about Florida State’s staff shutting out another opponent was that it was just one pitcher and not several in the same game. Redshirt sophomore Kathryn Sandercock extended her scoreless innings pitched streak to 19 straight for No. 7 FSU in a 5-0 win over No. 21 Duke. Sandercock (13-1) allowed just one hit while throwing an economical 80 pitches. The only hit surrendered by Sandercock was a leadoff triple by Duke’s Deja Davis to begin the fourth inning. But Sandercock got her revenge, throwing Davis out at the plate to end the inning when Davis tried to steal home between pitches.

7. Fresno State softball coach Linda Garza is taking a leave of absence and did not travel with the team on Friday to Colorado State, according to a report in the Fresno Bee. The school gave no reason for the leave and issued this statement in response to questions from The Bee: “Fresno State softball head coach Linda Garza has taken a leave of absence. Assistant coach Jodie Cox has been named interim head coach. No additional comments will be made at this time.”

8. Stanford’s Alana Vawter picked up her first ranked win, recording seven strikeouts against No. 14 Arizona State at Farrington Stadium. The victory marked the first time in a decade the Cardinal (23-8, 4-3 Pac-12) defeated the Sun Devils in Tempe and snaps a 12-game losing streak to ASU. Eleni Spirakis did most of the damage, going 2-for-4 with a home run and 3 RBIs.

9. There is a very real chance we don’t talk about Kass Wilbur nearly enough. Stephen F. Austin’s ace quietly improved to 19-3 by beating Texas A&M Corpus-Cristi twice on Friday. She struck out 12 and allowed just two hits in an opening shutout. Job done? Nope, she also came back and pitched six innings in the second game of the doubleheader. She’s flirting with some special territory with an ERA this season that now sits at 1.02. For her career, the third-year pitcher is 46-21 with a 1.54 ERA and 514 strikeouts in 427 and 2/3 innings.

10. Life is supposed to get more difficult for SEC pitchers when conference games begin — especially if you’re pitching for one of those teams trying to fight its way out of the bottom half of the league. But Mississippi’s Savannah Diederich seems to have things figured out. Diederich threw a five-hit shutout in her team’s 8-0 win against South Carolina on Friday. She’s now 5-3 with a 1.68 ERA in conference games, compared to a 3.07 ERA out of conference. And picked to finish last, Mississippi is cruising along at 8-6 in the league.

11. Like a lot of teams in the eastern third of the country, the threat of inclement weather Saturday and Sunday forced UCF and East Carolina to try and squeeze in a doubleheader Friday. It’s a good thing they scheduled it to start at noon because they seemed intent on playing until the storms arrived. It’s also a good thing for UCF’s ranking that Breanna Vasquez was around. UCF won the opener of Friday’s hastily-arranged twin bill, but it took 11 innings and a lot of pitches from both Alea White and Gianna Mancha. So when East Carolina got to White early in the nightcap, UCF turned to the lesser-used Vasquez. She threw five innings of two-hit shutout relief, on a season-high 123 pitches, giving her lineup plenty of time to erase a three-run deficit and win 9-5 to sweep the day.

12. Four of Arizona’s freshman combined for five of Arizona’s six home runs against visiting New Mexico. Sharlize Palacios, Carlie Scupin, Allie Skaggs and Isabella Dayton all homered for the Wildcats. Which non-rookie player hit the remaining bomb? Yes, you guessed it – Jessie Harper. The Arizona shortstop went yard once again moving her into a tie for fifth place in NCAA history with her 85th career home run. Five of the seven players in NCAA history with at least 85 homers are Wildcats – Katiyana Mauga (92), Stacie Chambers (87), Leah Braatz (85), Laura Espinoza (85) and Harper (85). Another at-bat also earned a long ovation from the Arizona fans. All-American second baseman Reyna Carranco made her first appearance since Feb. 21 as a pinch hitter in the sixth inning. Carranco is recovering from a broken thumb.

Bonus: Check out this quick transfer by Oregon true freshman Alyssa Brito to get the out.