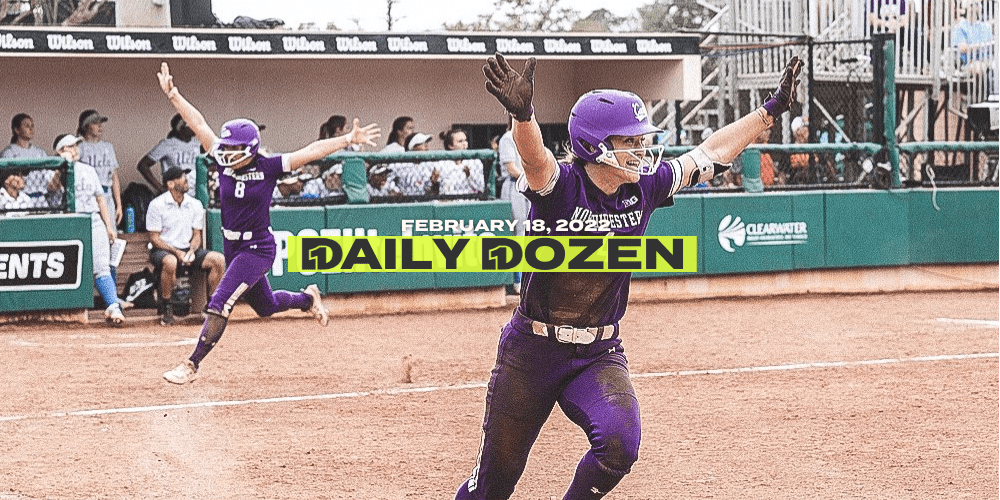 1. Northwestern beats UCLA in a classic. If each team has freshmen who were barely walking when Eileen Canney’s Wildcats battled Jelly Selden’s Bruins in the 2006 World Series semifinals, can we say UCLA-Northwestern is a historic rivalry? Whether or not the current players remember that clash, Friday’s game in Clearwater felt bigger than your typical matinee. Adding to the old school vibes, both teams let their aces go the distance, Danielle Williams and Megan Faraimo combining to throw 271 pitches over eight innings. Well, almost eight innings, in Faraimo’s case. Despite looking dominant at times en route to 14 strikeouts, Faraimo saw two home runs prove her undoing. Rachel Lewis hit the first of them, tying the game in the bottom of the sixth with a solo shot. Then after No. 4 UCLA took a 4-2 lead in the top of the eighth inning, No. 21 Northwestern’s Maeve Nelson hit a two-out, two-strike, two-run blast for a walk-off 6-4 win.

2. Keely Rochard’s only mistake was taking on Montana Fouts. For all the firepower in Clearwater, Friday’s signature game, by rankings, was No. 2 Alabama hosting No. 8 Virginia Tech. Fouts and Rochard made sure it lived up the billing, with Alabama earning a 1-0 victory. Rochard grew stronger as the game progressed, allowing only a two-strike single over her final four innings, striking out eight in that span without so much as reaching a three-ball count. But the slightest imprecision in the first two innings cost her. A walk, an error and Abby Doerr’s single turned into a run for the Tide in the bottom of the second. That was all Fouts needed. She has double-digit strikeouts in 11 of her past 12 starts, including two starts this season. And as efficient as Rochard was in the later stages, Fouts was that lethal throughout. Despite the high strikeout total, she needed just 84 pitches to shut out a top-10 team and reached a full count just once. Fortunately for the Hokies on a chilly night in Tuscaloosa, the bats warmed up just in time to stave off total disaster in the nightcap. Freshman Bre Peck’s walk-off home run capped a three-run rally in the bottom of the seventh to beat Middle Tennessee State 3-2.

3. Bailey Parshall is perfect. The lefty ace tossed the fifth perfect game in Penn State history in a 7-0 victory over FIU, the first since Missy Beseres threw one back in 2005 against Saint Francis. Parshall struck out 11 batters and recorded her third double-digit strikeout performance in four games this season. The Nittany Lions move to 5-2 on the season.

4. Patriot League Terriers bite the SEC Bulldogs. It’s not the biggest upset Boston University has pulled under Ashley Waters. But nearly four years to the day after the Terriers upset top-ranked Oklahoma, they stunned No. 19 Georgia on the SEC’s team home field. That completed a perfect Friday for the Patriot League side, which woke up winless this season but beat Purdue before the upset against Georgia. Down an ace this season after Ali DuBois transferred to Florida State, Boston University is making novel use of Alison Boaz to patch the hole. Boaz worked 5.2 scoreless innings Friday, but she split them across both wins. Four of her five appearances this season are in relief. At the plate, shortstop Kayla Roncin had two doubles and a triple against Georgia and added another triple against Purdue.

5. Dariana Orme dazzles for Baylor. Baylor coach Glenn Moore said entering the season that, sooner or later, Fresno State transfer Dariana Orme was going to be his program’s next centerpiece in the circle. We like the odds on sooner at this point. Opening a three-game series in Waco, Orme’s four-hit shutout led Baylor’s 3-0 victory against No. 11 Oregon. It was a heck of a time for Orme, who played one full season at Fresno State and the shortened pandemic season, to throw her first collegiate seven-inning shutout. As expected, Oregon’s Rachel Cid made her season debut this week after sitting out for undisclosed reasons a week ago, but pitcher Brooke Yanez is not expected to play again this week. Cid helped level the series in Oregon’s 8-4 win in the nightcap, with highly touted freshman Paige Sinicki adding her first career home run.

6. Florida State puts Texas on ice. Canada edged the United States for Olympic gold in women’s hockey on Thursday. Perhaps the Americans could have used college softball’s favorite former hockey player, Florida State shortstop Josie Muffley. In any case, as seen below, the Seminoles were glad to have her glove (and hops) to help protect the victory against Texas that redshirt freshman Michaela Edenfield secured with a three-run home — her second home run this season. The Seminoles were a bit fortunate to avoid Tennessee and Texas’ ostensible aces in Clearwater. But fortune favors those who score 18 runs in two games against ranked opponents, whoever is pitching.

7. Stephanie Schoonover’s record-setting no-hitter. Pitchers will generally take all the run support they can get. But in Schoonover’s case, her Kentucky teammates smothered her with so much support that it overshadowed the sophomore’s first no-hitter. Making just her second career start, Schoonover throttled UCSB in a five-inning no-no. But it was five innings because No. 18 Kentucky scored a program-record 23 runs. Kayla Kowalik led the Wildcats, no surprise, with a 4-for-4 day, including a home run and a triple. Lauren Johnson had a home run and a double among three hits. In all, 11 Kentucky players had at least one hit. The victory was No. 500 in Rachel Lawson’s time at Kentucky. Win No. 501 was a tad more dramatic, Kentucky needing two runs in the fifth to pull level with Loyola Marymount and two more runs in the bottom of the eighth for a 7-6 win on Rylea Smith’s walk-off double.

8. Skylar Wallace and the Gators chomp on the Duke’s pitching duo. Maybe Skylar Wallace’s performances earlier in the week against Jacksonville were just a preview of what is to come. Entering this week, the Alabama transfer had one RBI to her name before driving in five in two wins over the Dolphins. Her bat stayed hot against Duke’s Shelby Walters and Peyton St. George. Wallace homered and drove in four runs in four different ways (groundout, walk, single, home run). The Gator scored eight runs off Walters and St. George with neither lasted longer than 2.2 innings.

9. Turnabout is fair play for Wichita State. The Shockers brought newly-ranked No. 25 Illinois back to reality at the Razorback Invitational in Fayetteville, Arkansas. Illini pitching allowed just one home run in 35 innings a week ago, but the Shockers sent four balls over the fence in the fifth and sixth innings alone. That barrage, which included Addison Barnard’s fourth home run this season and 26th in 58 college games, was enough to see off Illinois 8-3. But live by the home run, well, you know the rest. The Shockers could only watch in stunned silence when Longwood walked-off with a 4-2 victory when the teams met later in the day. Korynna Anderson’s game-winning two-run blast was the junior college transfer’s second this season.

10. Louisville’s Carmyn Greenwood had a heck of a year Friday. Let us explain. While she is no stranger to run production, earning All-ACC honors with a 1.011 OPS in 2021, just three of her 74 hits were home runs a season ago. She matched that in the span of hours Friday. After hitting two home runs in a 10-7 extra-inning victory against Villanova — including the go-ahead blast in the top of the ninth inning — she added another in a 10-0 victory against Florida A&M. For the day, she went 5-for-9 with eight RBIs. She also hit a home run last weekend, so she’s already working from a new career high before we even reach Presidents Day.

11. Auburn’s Power Push. The Tigers continued their hot to the season with wins over Wisconsin and No. 10 Texas on Friday. Obviously, Shelby Lowe and Maddie Penta’s dominance in the circle are the headline for Auburn’s 8-0 start. But the lineup is making former All-American and assistant coach Emily Carosone proud as well. Makayla Packer and Bri Ellis each hit two-run blasts off of Hailey Dolcini in the first inning. Those were the sixth and seventh home runs for Auburn in Clearwater. After only hitting 22 home runs all of last season, the Tigers already have 15 after eight games.

12. Mia Davidson stands alone at the top of the SEC record book. The Mississippi State slugger finally passed Florida legend Lauren Haeger for the most home runs by an SEC player. Davidson hit a two-run bomb for her 72nd career home run against Central Arkansas. It’ll be interesting how high Davidson can move up the all-time home run list. This was only her third home run of the season, and her previous three full seasons she’s hit at least 17. Only five players have hit 90 homers in their careers and Davidson certainly has a chance to join them.

Bonus: Earlier this week, Rawlings announced it will sponsor Gold Glove Awards for nine softball players beginning this season. We agree with Wichita State that this comes a year two late for a lock at second base. But could UCF freshman shortstop Micaela Macario beat out a crowded field for the inaugural award at her position? The Knights sure think so, and Macario’s glovework is fast becoming must-see material.