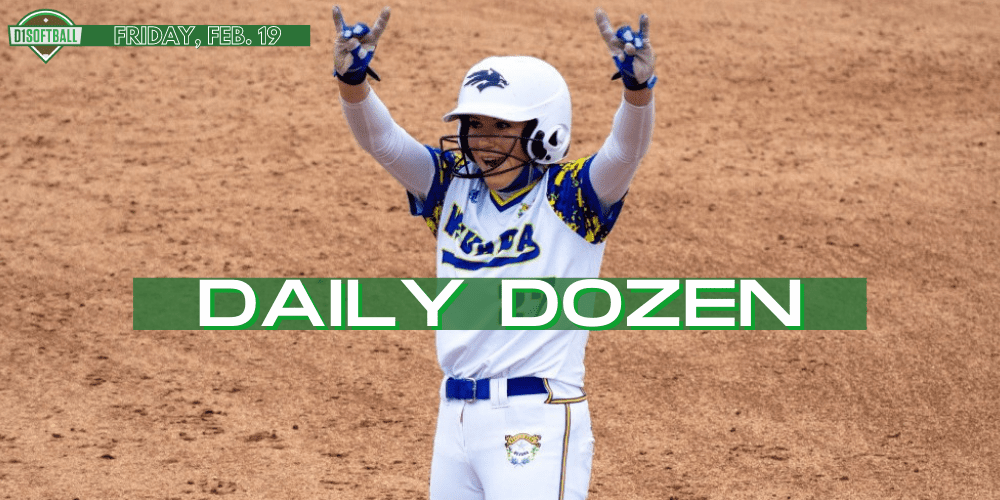 • This isn’t something No. 3 Washington is going to want to make an annual tradition. For the second year in a row, the Huskies gave up eight runs and lost the opening game of the season’s second weekend. Last year it was an 8-0 run-rule loss against Alabama. This year it was an 8-5 loss against Nevada in St. George, Utah – Nevada’s first win over a top-five program since the Pack defeated No. 1 Arizona in 2008. It’s safe to say Washington is still working through some things in the circle. Even Gabbie Plain wasn’t perfect Friday, giving up two runs in relief against Nevada after Washington closed the deficit to a single run. But she restored order by shutting out Dixie State in the nightcap run-rule win. The issue is that all of those not named Plain have a combined 8.15 ERA at the moment. So potentially dominant, Kelley Lynch ran into trouble with walks against Nevada. She’s walked at least two batters in 13 of 14 career appearances, the exception a one-inning relief stint. One thing you have to love: After a frustrating opening game in the circle, Lynch hit doubles in each of her first two at-bats in the nightcap. That’s a focused player.

• It’s been 348 days since Stanford last stepped on the field. With tight restrictions in Santa Clara Country, practicing as a full team has been a challenge. One would expect a few miscues in the season opener, but the Cardinal was flawless on defense in a 9-2 victory over San Jose State. Taylor Gindlesperger almost hit for the cycle going 3-for-4 with a single, triple and home run. Stanford faces the Spartans tomorrow in a double-header to complete the three-game series.

• The No. 4 Arizona Wildcats opened the 2021 season at home with two victories against Southern Utah and New Mexico. Alyssa Denham started game one throwing a one-hit shutout in the 8-0 run-rule victory. Mariah Lopez threw game two striking out 11 in the complete-game win.

Just in case you needed a reminder, Alyssa Palomino-Cardoza has mad power to all fields. Case in point:

• Kentucky is 5-0 in back-to-back seasons for the first time in program history. The Wildcats scored 21 runs on the day in a double-header against UNC Greensboro. Senior pitcher, Autumn Humes, hit a grand slam in the second inning of game one to put the Wildcats up early. The run production didn’t stop there as Kayla Kowalik went 4 for 4 with four runs scored in the same contest, and junior Renee Abernathy blasted two home runs on the day.

• Two starts, two shutouts for No. 13 Virginia Tech freshman Ivy Rosenberry. After Clemson routed Keely Rochard and the Hokies 8-1 on Thursday, Rosenberry silenced the series upset bid with a three-hit shutout in the first of Friday’s two games. Her teammates helped her out by keeping the game to five innings in a 9-0 win, but Rosenberry has now pitched 12 innings without allowing a run to begin her career. Rochard also bounced back to clinch the series with a strong outing in Friday’s second game. Both teams flashed some great defense in the outfield, with Virginia Tech’s Kelsey Brown sliding for catches in left field and Clemson’s McKenzie Clark ranging to make grabs in center.

• Catch or no catch? It was ruled a catch on the field and the Twitter analysts have been going mad ever since. Four diving catches in the outfield for Pitt between Hunter Levesque and Katlynn Pavlick, who put on an outfield clinic against Virginia. The Panthers split day with a win over the 7-4 win over the Cavaliers and a 9-0 loss to Duke.

• UCF set a couple of program records in its win over Mexico State at the the UCF Complex. The Knights scored a program-best 18 runs to defeat NMSU in a five innings. Picking up the win in the circle, Alea White, tied Shelby Turnier for the most wins in school history (80).

• Even without Peyton St. George in the circle for once, Friday told you all you need to know about why No. 25 Duke is ranked in its fourth season in existence. Brianna Butler pitched four shutout innings and Jameson Kavel and Rachel Crabtree combined for four hits and five RBIs in a 9-0 win against Pitt. All have been around from the program’s first game and have more than 350 appearances between them. Marissa Young and the Blue Devils got it right from the beginning.

• Payton Gottshall was at it again for Bowling Green, striking out 16 and going the distance in an eight-inning win against Winthrop. The second-year pitcher with four seasons of eligibility has 67 strikeouts in 29 1/3 innings this season, which borders on Nicole Newman, Miranda Kramer and Sara Plourde territory as mid-major pitchers you need to keep an eye on every week. While five games is just a tad early to start calculating these things, her strikeout rate is 15.98 per seven innings. Only one Division I pitcher ever topped 15 for a season: Cat Osterman.

• Iowa State had no trouble adjusting to outdoor softball, shutting out Mississippi 2-0 and beating host FAU 6-3 in Boca Raton, Fla. after winning all five of its games indoors last week at Northern Iowa’s tournament. This marks the program’s first 7-0 start since 2009. Days after she was named one of 30 players up for the Senior CLASS Award, Sami Williams drove in runs in both games and hit her third home run of the season.

• No. 9 Texas will make its long-awaited 2021 debut, after all. The Longhorns were initially left without games for the second consecutive week when the Tracy Beard Invitational was canceled due to the winter weather that crippled the state (the Longhorns also canceled their midweek home opener). But the team announced Friday it would play Wichita State and North Texas on Sunday in Conroe, Texas, in the appropriately named Scrap Yard Blizzard Challenge. Assuming No. 8 Louisiana is able to take the field Saturday in Birmingham, Alabama, Texas will be the last top-10 team to debut this season.

• The long layoff between seasons did nothing to cool down Charla Echols’ bat. Echols hit her second home run of 2021 in Florida’s 8-3 win over Georgia Southern. The junior third baseman finished 3 for 4, and is 11-for-13 on the season with a double, two triples, two home runs and nine RBIs.