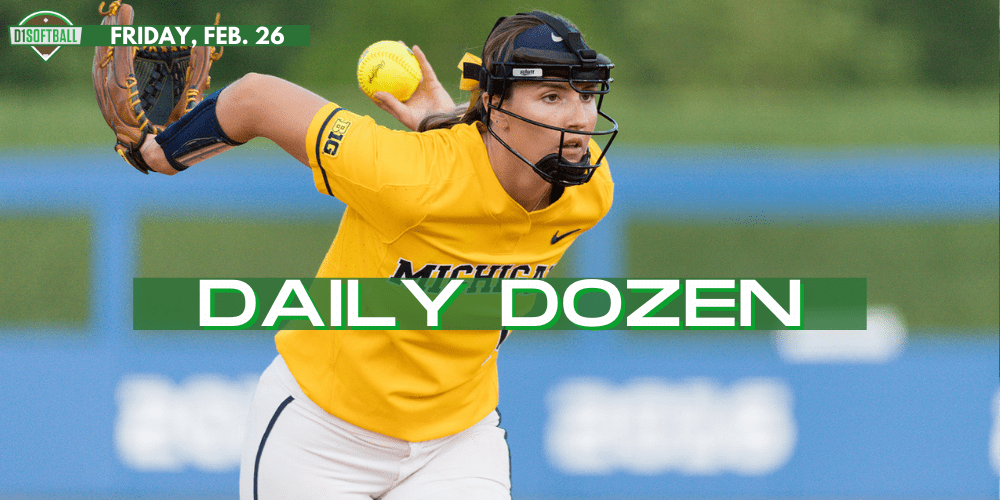 1. Michigan’s one-two pitching punch of Meghan Beaubien and Alex Storako punched out a lot of batters on Opening Day for the Big Ten Conference in Leesburg, Fla. Beaubien and Storako combined for 35 strikeouts in a pair of 4-0 wins over Purdue. The duo allowed no runs and just three hits and walks over 14 innings. Beaubien matched the Michigan single-game record and tied the Big Ten record for most strikeouts in a seven-inning game with a career-best 19 in a one-hit win. The senior All-American’s no-hit bid was broken up by a leadoff infield single in the seventh inning, and that only tells part of her story of dominance. She recorded the first 17 outs of the game by strikeout, and every batter in the Purdue lineup struck out swinging in her first at-bat. Beaubien now has 45 strikeouts in her last three complete game, the diminished strikeout rate of her 2019 season a distant memory. Storako tied her career best with 16 strikeouts to earn her fifth career shutout. The junior right-hander allowed only two third-inning singles and three total baserunners. Junior Hannah Carson caught both games for Michigan.

2. Believe it or not, Michigan’s duo didn’t even have the most efficient pitching act in the Big Ten on opening day for the conference. Northwestern’s Danielle Williams and Lauren Boyd matched their peers by allowing just three combined hits in back-to-back shutouts against Michigan State. But neither Williams nor Boyd allowed any other runners on base. We kind of expected that out of an All-American like Williams, who had more total bases as a hitter (3) than she allowed as a pitcher (2), but Boyd’s first college start was a smashing success. Perhaps eight strikeouts and no walks shouldn’t be surprising from a pitcher who once had 157 strikeouts and just two walks in a high school season.

3. The doubleheader between No. 12 LSU and No. 9 Oklahoma State lived up to the hype, featuring great pitching and defensive gems on both sides. OSU swept the host Tigers 1-0 and 3-1 behind complete games from Kelly Maxwell and Carrie Eberle to extend its program-record winning streak to 23 games dating back to last season. Maxwell (4-0) threw a two-hit shutout with six strikeouts to keep her ERA at 0.00. Eberle surrendered just three hits and one earned run while striking out six. Maxwell outdueled LSU’s Shelbi Sunseri in the opener with Taylor Tuck at catcher for the Cowgirls. Sunseri gave up four hits and struck out six. The Cowgirls were wearing their turquoise Nike N7 uniforms to honor Native Americans.

Along with the high-level pitching, both teams provided highlight-worthy defensive gems. Jordan Doggett made three sensational catches in left field for OSU, but Aliyah Andrews stole the show yet again with another Superwoman-esque catch in center as seen below.

4. Texas State head coach Ricci Woodard endearingly calls her freshmen “field rats” because of how much they like to play the game. The entire Bobcat program is embracing the gritty mentality. Texas State has shown it won’t back down against power programs. The Bobcats beat No. 18 Mississippi State 4-3 in the opening game of a doubleheader at the Lone Star Invitational on an RBI double by ArieAnn Bell in the sixth inning. The win came two days after Texas State pushed No. 8 Texas to the limit in Austin, losing 1-0 in eight innings on a throwing error.

5. Kentucky was truly challenged for the first time this season in its second game at The Spring Games in Florida. The No. 15 Wildcats rallied to beat Florida International University 6-5 on a walk-off two-run triple by Renee Abernathy. Entering the tournament, Kentucky had outscored opponents 107-22 with five run-rule wins. UK’s 107 runs scored set an SEC record for most runs scored in a team’s first nine games of a season.

6. A clear pattern has emerged for No. 5 Washington. If Gabbie Plain pitches, the Huskies can win. If she doesn’t … well it’s a complete toss-up. Washington suffered another loss without Plain in the circle as San Diego State’s Maggie Balint threw a one-hit shutout to take down UW 4-0 to split the doubleheader. It was the highest ranked opponent San Diego State has beaten since 2008. Balint, a transfer from Oregon, allowed only a one-out double in the of the first while striking out four and walking two. Danielle Romanello was behind the plate for the Aztecs. Kelley Lynch took the loss for UW, giving up seven hits and four earned runs.

7. Oklahoma scored all of its runs via the long ball *shocker* against No. 13 Arizona State in a 5-3 win on the road. The Sooners bump their season total to a whopping 36 home runs in just nine games. (More analysis soon to come from our Tara Henry, who attended the game).

8. First off, it’s difficult to believe we’ve already been playing softball long enough for a pitcher to be 6-1. But second and more importantly, it’s kind of hard to believe anyone actually beat Troy’s Leanna Johnson. The third-year ace was at it again Friday, striking out 13 in a two-hit shutout of North Carolina at Alabama’s Crimson Tide Classic. That’s the second time this season she recorded double-digit strikeouts while beating a Power 5 opponent after earlier stymying Mississippi. Johnson now has 76 strikeouts in 40 innings this season and 213 strikeouts in 134 innings since the start of last season. Who else is excited to potentially see her face Alabama on Sunday?

9. Indoors in Iowa? Go east to Florida? Head west to Arizona? For Sami Williams, it doesn’t much matter. Put her on the next mission to Mars and she’ll hit anything the rovers throw at her, too. Williams has been the constant for No. 22 Iowa State on its travels this season, and she spent her first day in the desert hitting three more home runs in wins against Portland State and Grand Canyon. She now has seven home runs this season and 53 in her career, the latter in the top 10 for active players.

10. Softball needs an adjusted ERA statistic that takes into account runs produced by two-way pitchers — something along the lines of net runs allowed. Rachel Garcia would obviously dominate the category, but Oregon State’s Mariah Mazon would hold her own. While BYU scored three runs against Mazon on Friday, only one of them earned, the ace erased that damage with a double, home run and three RBIs of her own in a 10-3 win. She only had 26 at-bats in her first two college seasons, but she’s been a run-producing presence since last season.

11. See what happens when you let Mary Haff pitch with some rest? The busiest pitcher in the country last week — at least during a roughly 24-hour period when she seemed like a permanent fixture on the field — Haff only had to work five innings to get a no-hitter in No. 16 Arkansas’ 9-0 run-rule win against Texas Tech. It was Haff’s second no-hitter for the Razorbacks. Her teammates made sure it was a short day of work by matching a school record five with home runs. Freshman Hannah Gammill and Linnie Malkin each contributed to the record-tying effort and now have 11 combined home runs this season.

12. The NCAA all-time home run record has officially commenced. Arizona senior shortstop Jessie Harper hit her first long ball of the season, lining a two-run shot over the right field wall in Arizona’s 9-1 six-inning win over Seattle at Hillenbrand Stadium. The home run was the 77th of Harper’s career, which is 19 shy of the all-time record held by Oklahoma’s Lauren Chamberlain.