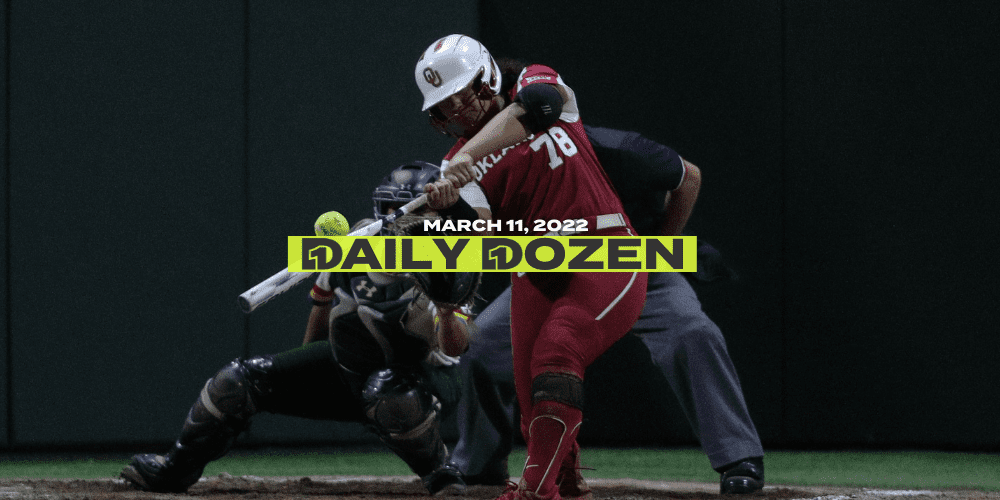 1. A new champion on familiar turf. Already a national champion, the reigning player of the year and an inspiration in her often overlooked home state, Jocelyn Alo now stands alone as the NCAA’s all-time home run leader. And she got to take her curtain call at home after hitting No. 96. Read more about Alo surpassing Lauren Chamberlain.

2. Courtney Coppersmith strikes out the world. And to think, UMBC’s Coppersmith didn’t even have the best strikeout rate on her team when she woke up Friday. But even with perfect games popping up everywhere, the Retrievers ace is second to none after a day for the ages. In throwing a perfect game in UMBC’s 1-0 victory against Brown, Coppersmith struck out 20 of the 21 batters she faced. Only a fourth-inning bunt broke up the strikeouts. The first nine batters she faced struck out swinging. So did the final nine batters she faced. She’s only the 13th pitcher in the Division I record book to strike out at least 20 batters in a game.

That’s plenty, right? Well, yes, but it’s not all Coppersmith did Friday. Her perfection actually came in her second stint in the circle. She warmed up by pitching two shutout relief innings in a 2-0 victory against Hofstra — recording all six outs by strikeout, of course. That’s nine innings and 26 strikeouts for the day. It doesn’t count as one appearance, obviously, but consider that only three pitchers in Division I history ever struck out more than 26 batters in a game of any length — and each of them needed at least 16 innings to get there. A lot of people tried Friday, as you’ll see momentarily, but few ever did it better than Coppersmith.

3. Thursday and Friday featured imperfect weather but plenty of pitching perfection. In addition to Coppersmith, pitchers from Arkansas, Illinois State and UCLA were perfect in different ways (after Oklahoma State’s Miranda Elish came within a walk of perfection in no-hitting Minnesota on Wednesday).

4. Florida State and Georgia Tech go deep into the night. It’s probably a good thing FSU and Georgia Tech aren’t playing on Saturday considering how long they stayed at Mewborn Field on Friday. FSU outlasted the Yellowjackets 6-2 in 12 innings in the second game of an ACC doubleheader that lasted 4 hours and 12 minutes. The Seminoles scored four runs in the 12th, highlighted by a 3-run home run by Georgia native Jahni Kerr. The teams were locked in a scoreless tie through nine innings. Kalei Harding and Devyn Flaherty gave FSU a 2-0 lead in the 10th with deep home runs, only to see Georgia Tech answer in the bottom half. The Jackets put runners on second and third after an error, and FSU decided to walk Emma Kauf to load the bases. Tricia Awald made the Noles pay, slicing a two-run double to left field. Sydney Sherrill’s fielder’s choice RBI with the bases loaded brought in the go-ahead run in the 12th before Kerr sealed the outcome with her big blast. Kathryn Sandercock threw 8.1 innings for FSU, allowing seven hits and no runs on 158 pitches. Mack Leonard earned the win, allowing four hits and two runs. Brianna Enter secured the final outs. FSU won the opener 4-1 behind a three-hitter from Danielle Watson and home runs from Harding and Leonard. Because of inclimate weather expected in the area on Saturday, the teams will complete the three-game series on Sunday afternoon. Their bodies will need the added rest after nearly playing three full games in one day.

5. Eugene’s dynamic duo back at it. Playing without Brooke Yanez for the entire season isn’t going to be easy, with the ace announcing Thursday that she won’t return until 2023. But it’s going to be considerably more manageable if Vallery Wong and Ariel Carlson keep hitting home runs every game. Wong, the reigning D1Softball Player of the Week, and Carlson hit first-inning home runs in Oregon’s 7-0 victory against Portland State on Friday. That’s six home runs in the past six games for Wong and seven home runs in the past nine games for Carlson. Two weeks ago, they had one home run between them. Now they’re right there with Washington’s Baylee Klinger and Madison Huskey, Arizona’s Carlie Scupin and Allie Skaggs and Oregon State’s Frankie Hammoude and Mariah Mazon as the most prolific power duos in the Pac-12. More four-hit shutouts from Jordan Dail (5 IP) and Makenna Klietheremes (2 IP) won’t hurt, either.

6. Kentucky provided a week full of highlights all in one game. A tremendous catch? ✔. An inside-the-park home run? ✔. A complete-game shutout? ✔. Senior Lauren Johnson started things off in the top of the fifth inning of a 7-0 win over Buffalo to open the Bluegrass Classic. The left-fielder caught a foul ball just before flipping over the fence down the left field line. Johnson managed to keep control of the ball while landing on her head. Renee Abernathy added some offensive theatrics in the bottom half of the inning. She lifted a deep fly ball to center with two outs and two runners on that hit the top of the wall, bounced straight up and landed back into center field as she raced around the bases. The inside-the-park home run was the first for Kentucky since 2014. Miranda Stoddard pitched a complete-game shutout, allowing just two hits and striking out seven.

7. Heavy is the head that wears the crown. No. 24 Charlotte began the week ranked. Thanks to Western Kentucky’s Shelby Nunn, the 49ers now face an uphill climb to a .500 week. After dropping a 9-1 midweek decision against Duke, Charlotte opened Conference USA play with an extra innings loss against the Hilltoppers. Nunn showed ample resilience after Charlotte broke up her shutout to tie the game 2-2 in the bottom of the sixth inning. The fifth-year pitcher allowed just one runner over the final three innings, allowing teammate Brylee Hage plenty of time to deliver a decisive two-RBI single in the ninth. Nunn improves to 10-2 with a 1.56 ERA.

8. Denver sends it over the mountains. It didn’t go quite that far, but Denver Bryant made sure Auburn started the SEC season with a win. After tying the game in the seventh, belted the first strike she saw in the eighth for a walk-off homer. The Tigers certainly had to earn their 5-4 win over Texas A&M. The Aggies knocked out Shelby Lowe after two innings, but KK Dismukes proceeded to throw five scoreless innings to allow her offense to make a comeback. Maddie Penta tossed the eighth inning, escaping a bases-loaded jam.

9. Virginia made a strong ACC opening statement. The Cavaliers swept Notre Dame in a doubleheader to start conference play on a high note. UVA rallied for a 7–5 win in the opener by scoring five runs with two outs in the bottom of the seventh inning, including a three-run walk-off home run by Abby Weaver. The home run was Weaver’s first of the season. UVA made it less dramatic in the second game, beating the Irish 6-1 behind two-RBI performances from Lauren VanAssche and Gabby Baylog. Aly Rayle and UVA’s defense limited Notre Dame to just four hits. Because of inclimate weather expected in the area on Saturday, the teams will complete the three-game series on Sunday.

10. Lucky number seven. What would a Daily Dozen be like without a Georgina Corrick update. The USF superstar threw another shutout Friday, allowing one hit to Army and striking out 14. Corrick lowered her season ERA to 0.07, yes you read that right. At some point, we have to consider Oklahoma State’s Chyenne Factor one of the better hitters in the nation simply because her solo home run back in Clearwater is the only earned run Corrick has surrendered in 98 innings this season.

11. A big dog series win. Butler went to Villanova and swept Friday’s doubleheader. The Bulldogs outscored the reigning Big East champs 11-1. Karli Ricketts only allowed two hits in the first game with the lone run coming off a solo home run. Alyssa Graves followed with a complete game shutout. Nova has had its struggles this year, DePaul is 4-11 since starting the season 5-0 and UConn entered the weekend under .500. Butler certainly has a pathway to being the best team in the Big East and Friday certainly was a good start. Weather permitting, the Bulldogs will go for the sweep on Sunday.

BONUS: Day of (weather) rest. Softball may be considered a spring sport, but Mother Nature works on her own calendar. Snow and rain has forced alterations to this weekend’s schedule. Several games were postponed Friday and several more have been postponed Saturday as rain and snow blanket sections of the country. In anticipation of the wintery weather, many teams involved in a three-game conference series have scheduled doubleheaders. The SEC-opening series between No. 10 Missouri and No. 16 Tennessee has been reduced to a Sunday doubleheader because of snow in Columbia, Mo. The Lady Vols arrived on Thursday night before the Friday and Saturday games were canceled and will remain there in anticipation of playing at some point.