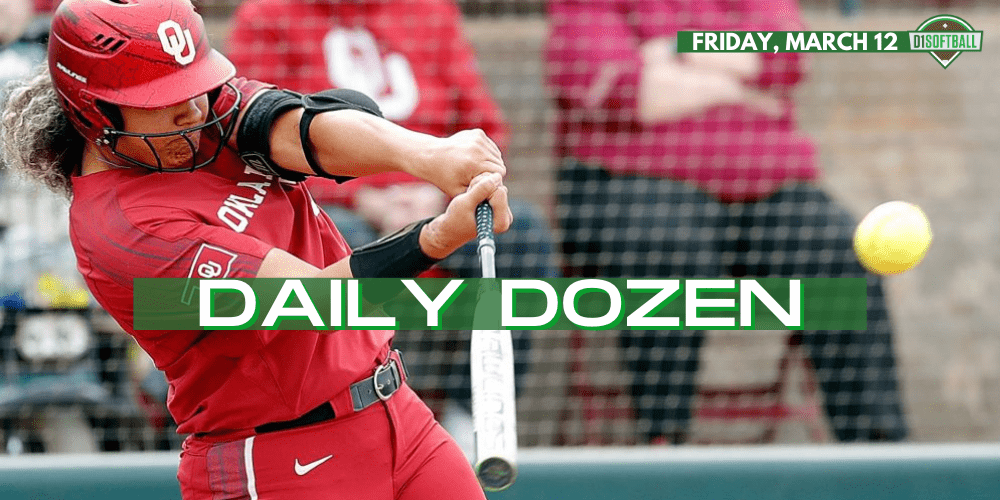 1. Jocelyn Alo may not even need an extra season to make home run history. With two more in Oklahoma’s wins Friday against Houston and Kansas City, Alo now has an NCAA-best 17 home runs this season and 71 in her career. The second number is enough to put her in a tie for 25th in NCAA history. But she’s done that in just 165 games. Only one other player in the top 25 — Lexie Elkins — played fewer than 200 games (75 HR in 197 games). Alo is almost even in pace with Lauren Chamberlain, who hit 72 home runs in her first 161 games. Arizona’s Jessie Harper still leads Alo among active players, but the record book will belong to Alo, currently listed as a senior, if she wants it in 2022.

2. The fourth inning was the game changer for No. 8 Florida in the SEC opener against No. 13 Kentucky. The Wildcats had the bases loaded with no outs in the top half with game still scoreless, but Florida’s Elizabeth Hightower escaped the jam by only allowing one run on a sacrifice fly and striking out the other two batters. Kendyl Lindaman answered in the bottom half with a two-run double – only a foot away from a 3-run home run – to put the Gators in front for good on their way to a 3-1 win. The Wildcats (19-1) – playing their first ranked opponent and second Power 5 opponent – suffered their first loss of the season in a series opener that was filled with great defensive plays from both sides – from diving catches to snags over the dugout rail to grabs on the run.

3. UNLV drew college softball’s shortest straw. The Rebels were minding their own business, off to a terrific start as Kristie Fox continues to build the program … and then they got Rachel Garcia’s first start in the circle (not counting the February start when she didn’t throw a pitch after sustaining an injury on offense). Garcia recorded 14 of 15 outs by strikeout and allowed just one hit in five scoreless innings against UNLV on Friday — all the innings she needed after UCLA run-ruled its opponent in a 10-1 win. It comes in admittedly limited innings, but Garcia hasn’t allowed a run this season and has recorded 28 of 31 outs by strikeout.

4. Arizona’s Mariah Lopez threw a complete-game three-hit shutout as the No. 3 Wildcats bounced back to even the series over No. 15 Florida State with a 1-0 win on the road. Arizona got the only run it needed when Sharlize Palacios singled to left center to score Isabella Dayton in the fourth inning. Caylan Arnold and Danielle Watson otherwise kept the Wildcats off balance. Arnold started for FSU, allowing four hits, one run and striking out a season-high 10 batters in 5.1 innings. Watson allowed one hit with three strikeouts in 1.2 innings of relief. The teams meet in the rubber match on Saturday at 6 p.m. ET.

5. Virginia Tech needed an inning or two to shake off the rust from a long break. The Hokies returned to the field on Friday for their first game since going on pause on Feb. 25th because of a positive Covid-19 test and contract tracing within the program. North Carolina State took an early lead in the series opener with a 2-run home run by Logan Morris, but Virginia Tech rallied for the 4-2 win. Jayme Bailey’s two-run double in the third inning was the difference for the Hokies. After yielding the early home run, Tech ace Keely Rochard was back in fine form. She threw a four-hitter with 12 strikeouts on 141 pitches.

6. On Thursday, Nebraska forced extra innings against Michigan without actually managing a hit against Meghan Beaubien. But the Huskers weren’t going to get the win they wanted without at least one hit. They didn’t Thursday, eventually losing 2-1 on Beaubien’s no-hitter. They did Friday, freshman Sydney Gray’s two-strike, two-out, two-run walk-off single against Alex Storako delivering a 5-4 win in another extra-inning thriller against the Wolverines. It was the third extra-inning game of the day for the Big Ten and the sixth in this round of games in Florida — where the large dimensions are helping keep scoring low.

7. One team’s Heaven is another team’s … Texas Tech’s Heaven Burton stretched over the fence to make a great snag in foul territory down the right field line against New Mexico. That alone is worth celebrating. But then she made the throw to second to complete a double play. It was one of numerous defensive highlights turned in by the Red Raiders on the day.

8. Sami Williams has played 21 games this season; she has at least one hit in 20 of them. She had several in Iowa State’s 9-1 win against Kent State on Friday, which is how someone ends up hitting .507 a month into the season. She had three hits in the win, including her 11th home run of the season. Her only hitless game came against Florida Atlantic on Feb. 20. Iowa State lost that game, which at least symbolically sums up what she means to the Cyclones. Friday’s bounceback win gives the Big 12 team some momentum heading into games against Missouri the next two days.

9. Maddi Hackbarth did not hit a home run in Arizona State’s game against Northern Illinois on Tuesday. Sorry, we thought it would be easier if we just start noting when she doesn’t go yard. If you missed it Thursday, Hackbarth’s two (more) home runs led Arizona State in a 7-4 win against Baylor. Those home runs, which included a three-run blast that broke open the game in the fourth inning, give her nine home runs in her last nine games. She’s been so good that she’s hitting .363 this season on extra-base hits alone (.491 when you add in the singles).

10. Baylor appeared headed for a classic “snowball” scenario, letting a disappointing loss the previous night linger into the next day. Goose McGlaun made sure it didn’t happen. Her walk-off home run completed a comeback in a 3-2 win against Northern Illinois, which then propelled Baylor to a 12-1 rout of Grand Canyon in the nightcap of Friday’s doubleheader. After Baylor rallied in the sixth inning to tie the game against Northern Illinois at 2-2, McGlaun ended the game on the first at-bat of the bottom of the seventh inning. That was her second home run of the season — which represented half of Baylor’s total home runs this season until Zadie LaValley and Ana Watson went deep in the win against Grand Canyon.

11. You don’t want to go to extra innings against Ohio State. The Buckeyes clinched their three-game series against Wisconsin with a 3-2 win in eight innings in the finale. That was still a far easier day at the office than Thursday, when it took 15 innings for the Buckeyes to beat the Badgers in what was only the first game of a doubleheader. And all of that after Ohio State beat Minnesota in 11 innings two weeks ago, during the first round of Big Ten games in Florida. After Payton Buresch ran into trouble Friday, perhaps feeling the 10-plus innings she threw 24 hours earlier, freshman Allison Smith pitched flawless relief innings to give Ohio State a chance.

12. Several ranked teams had unexpected days off. LSU and Tennessee saw the opener of their SEC series postponed until Saturday (1 p.m ET), leaving the Tigers with a busy Saturday for the second weekend in a row. And Oregon is still waiting to play on a Friday for the first time since the season’s opening week. Originally scheduled to play a doubleheader against Nevada, the Ducks canceled those games while the Wolf Pack continue to wait out a COVID-related pause.