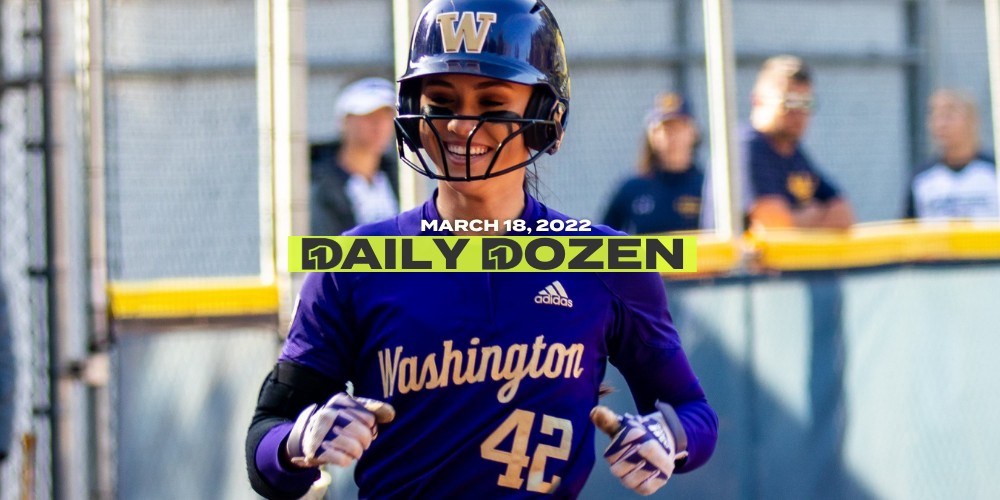 1. Washington escapes in Pac-12 opener at Cal. It won’t surprise anyone that Washington turned things over to its pitcher to get it out of trouble after finally finding the runs it needed in its Pac-12 opener at Cal. It might surprise some that the pitcher was Pat Moore. The super senior worked three nearly flawless innings in relief of starter Gabbie Plain, ensuring the Huskies escaped with a 4-2 victory. After walking the bases loaded and getting out of the jam in the first inning, Cal starter Haylei Archer kept Washington in check. It appeared destined to be her night after she got out of another bases loaded jam, this time with no outs, in the fifth inning. She allowed one run but maintained a 2-1 lead. But with Cal unable to muster anything against Moore, Washington took the lead on Jadelyn Allchin’s two-run home run in the sixth inning and padded it on Baylee Klinger’s RBI single. And Moore, working as many as three innings for just the second time since Feb. 19, calmly finished the job. The concern for Washington will be the status of Sami Reynolds, who left the game after she was hit in the head by a pitch in the third inning. Reynolds appeared shaken but left the field under her own power.

2. But Oregon doesn’t at Utah. Sydney Sanchez didn’t throw her sixth shutout, but good luck finding a better performance on the Utah senior’s resume than Friday against Oregon. Backed by early runs from her teammates, Sanchez went the distance and allowed just six Ducks to reach base in Utah’s 5-2 victory. After a tough first month, it was good to see Halle Morris come up with one of the biggest hits — a second-inning double that helped kickstart a scoring sequence that put the Utes ahead to stay. While it might be a stretch to say the Utes have a knack for doing this, they did upset 10th-ranked UCLA to open conference play in 2017 and went on to sweep the series. Ducks beware.

3. Sun Devils are Rollin. After beating Oregon State 5-3 to open conference play, Arizona State has won nine straight games and 12 of its last 13. The reason behind the success has been contributions throughout the lineup and decent pitching. Jazmyn Rollin’s first-inning grand slam ended up being the difference. Trisha Ford went with the freshman Mac Morgan in the circle. She tossed a complete game, forcing 11 groundouts on her way to her 10th win of the season. The Beavers used a combination of Tarni Stepo and Sarah Haendiges as Mariah Mazon remained out with an injury.

4. Arkansas rallies for SEC road win. Freshman Kacie Hoffman hit the game-winning home run and Mary Haff made several big pitches down the stretch to help the Hogs beat Tennessee 4-3 in the SEC series opener at Sherri Parker Lee Stadium. Hoffman’s three-run home run trumped a three-run home run by fellow freshman Lair Beautae that gave the Lady Vols a 3-0 lead. UT starter Erin Edmoundson held Arkansas in check through the first five innings, but the Hogs found their power surge in the sixth. Hoffman’s opposite field shot put Arkansas up 4-3. UT threatened in the sixth with a hit and bunt that dropped in the right spots to elude Arkansas’ gloves. Haff intentionally walked Kiki Milloy to load the bases with two outs, and struck out Amanda Ayala on just three pitches to escape the jam. Haff finished with 11 strikeouts and five walks while allowing six hits. Edmoundson gave up seven hits with seven strikeouts and one walk. Arkansas extended its winning streak to 10 while snapping UT’s 10-game winning streak.

5. There is no time for self pity in the SEC. After dropping a series against LSU last weekend and a midweek game to Florida State, Alabama wanted to start the weekend off with some positive energy. The Tide bounced back with a 4-2 win over Kentucky in the opening game of a three-game SEC series at Rhoads Stadium. Kentucky’s offense was averaging 8.3 runs per game, but Alabama ace Montana Fouts limited the Wildcats to four hits while striking out 10. Errors hurt the Tide in the loss to FSU and the issue cropped up again. Kentucky took a 2-1 lead in the third inning on an RBI single by Erin Coffel and a throwing error. But Ally Shipman put the Tide back on top in the fifth with a two-run double – her third RBI of the game after a sac fly in the first. Kaylee Tow provided some insurance with an RBI single. Fouts struck out the final two batters swinging for her 34th career game in double-digit strikeouts.

6. St. George and the long ball lead Duke to the win. The Blue Devils knocked Clemson ace Valerie Cagle out of the game with home runs, and Peyton St. George handled the rest as Duke beat Clemson 6-2 in an ACC series opener. It was a showdown between the ACC defending regular season champion (Clemson) and ACC defending tournament champion (Duke). Caroline Jacobsen tied the game for Duke with a home run in the second and Rachel Crabtree delivered the big blow with an opposite field three-run shot in the fifth. Crabtree’s home run was part of a five-run fifth inning that broke the game open and chased Cagle. St. George finished with eight strikeouts and no walks while giving up five hits.

7. Miranda Elish no-hits the nation’s No. 5 offense. Most of us do a bit of eye rolling when it comes to five-inning no-hitters. They’re five innings. But just as Megan Faraimo added some luster to the five-inning perfect game by striking out all 15 batters a week ago, Oklahoma State’s Elish caught our attention by throwing a five-inning no-hitter against a Wichita State offense that entered the day hitting .339 and averaging 7.9 runs per game — and then scored 16 runs on 22 hits to beat Kansas City before facing the Cowgirls. Wichita State’s previous season low was three hits, and it had 88 hits in the seven games immediately preceding Friday’s tilt. It’s Elish’s second no-hitter in 10 days. It was also a heck of a day for Elish’s catcher. Julie Cottrill hit three home runs across OSU’s doubleheader, two in a 9-0 victory against Kansas City.

8. Boise State opens Mountain West season in style. “Walk-off” run-rule wins are even more dubious than five-inning no-hitters. But after Boise State’s Bella Rocco clinched one of those in her team’s 13-5 victory against Fresno State in the first game of Friday’s doubleheader, the Broncos gave us the good stuff in the nightcap. This time the spotlight fell on Jordyn Hutchins, who came to the plate with two runners on base and her team trailing by two runs in the bottom of the seventh. Cue dramatic music for a team that improves to 22-5.

9. If you’re going to wait nearly three years to play a conference game again, you might as well start with your biggest rival. Harvard and Yale opened Ivy League play on Friday with a doubleheader at 5K Corral Field at DeWitt Family Stadium. Harvard swept Yale 3-1 in the opener and 1-0 in the second game. Prior to Friday, the Ivy League hadn’t played a conference game since 2019 because of Covid. The three-game series was originally slated to start Saturday, but weather pushed up the doubleheader. It will conclude on Sunday.

10. Georgina Corrick starts a new streak. We hear there were basketball games played Thursday that might have diverted your attention. If you missed it, Corrick’s bid to break Danielle Henderson’s Division I record streak of 105 consecutive scoreless innings came to an end after 88.1 innings. After pitching (another) shutout in USF’s opening game of the day against Ohio State, Corrick came on in relief in the nightcap against Purdue and allowed a leadoff home run to Kaeley Hallada. That proved to be the only run of the game, unfortunately for USF’s ace, so the relief stint also sullied her previously perfect record and left her 18-1 on the season. No problem. Corrick was back in the circle Friday against Lehigh and not only threw a shutout (extending her new streak to 10 innings) but hit her first home run of the season to put her team ahead to stay.

11. Central Connecticut State snaps season-long skid. The Knights had to wait exactly a month, but they were finally able to celebrate a win. CCSU beat Farleigh Dickinson 2-1 to open Northeast Conference play.  The Knights started the season 0-18 before their breakthrough in the opening game of a doubleheader. Senior Bri Walker drove in both runs for the CCSU. The Knights lost the second game 5-2, but a one-game losing streak sounds much better than an 18-game losing streak.

12. In her Hall of Fame Stadium debut, Iowa’s Nia Carter went 5-for-5 to tie the program single-game record for hits. College softball’s cathedral in Oklahoma City looked a little different the last time Iowa made the World Series in 2001. The current Hawkeyes may be a longshot to get back there in May, but Carter looked the part in a record-tying performance. The junior had more than half of her team’s hits in an 8-4 victory against Houston in the Hall of Fame Classic, tying the program single-game record shared by three other players. Although not enough to land her in the NCAA record books, five hits in a seven-inning game is a good trick. Doing it in the stadium every player grows up seeing on television is even better. (OKC moments were contagious — San Diego’s Lauren Hendrickson delivered a walk-off, pinch-hit, two-run double to beat Sam Houston State in Friday’s action in Hall of Fame Stadium.)

Bonus: Wanna have a catch? Butler showed it’s always a good time to give the younger generation a thrill of a lifetime.