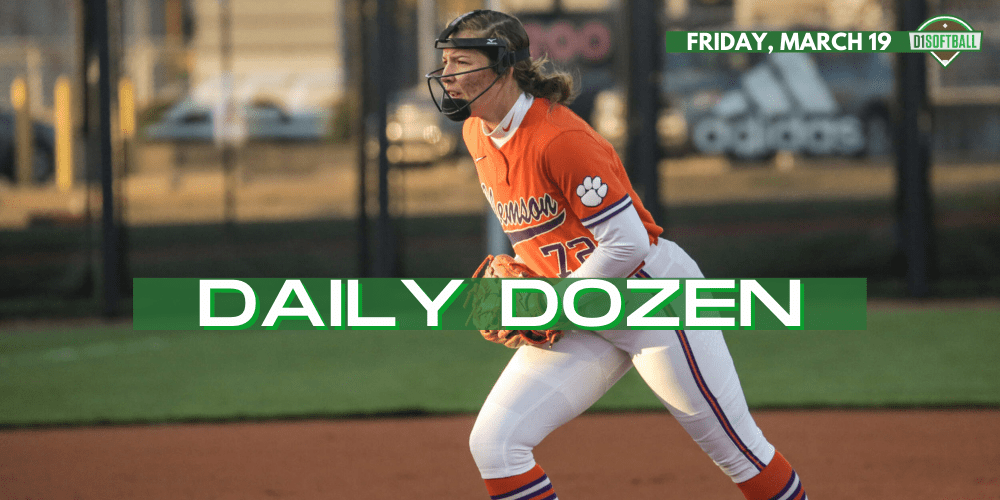 1. There are definitely easier ways to try and break out of an offensive slump than going against Gabbie Plain. The Washington ace recorded 16 strikeouts and allowed just two hits as the Huskies beat Arizona 2-1 in the Pac-12 Conference opener. Arizona has lost four of its last six games. Take out an 8-0 win over Florida A&M and the Wildcats have scored only four runs in that span. Granted, they’ve faced quality pitching along the way. But that’s required if a team has title expectations. Plain struck out every Arizona batter at least once, and fanned two Arizona batters three times each. Arizona’s lone run was a fifth-inning lead-off home run from Dejah Mulipola. UW graduate senior catcher Morganne Flores called the pitches for Plain during the performance. Now Washington just needs its other pitchers not named Gabbie Plain to begin showing the consistency required to produce weekend sweeps.

2. It could have spiraled out of control quickly for Tennessee. Coming off a blowout loss to LSU to close last weekend’s SEC series, the Lady Vols were facing an early deficit against Alabama in the opener at Rhoads Stadium. On the first pitch of Alabama’s first at-bat against Ashley Rogers, KB Sides belted a double to the wall and the Tide plated two runs in the first inning. But Rogers settled down, the Lady Vols rallied and then held on in the end to beat Alabama 4-3. Rogers retired a streak of 16 straight batters after giving up the unearned runs. The junior finished with a three-hitter while striking out seven and walking three. Graduate senior Cailin Hannon finished 2 for 4 with two RBIs and Amanda Ayala was 3 for 4 with an RBI and run scored. Errors and sloppy defense hindered Alabama. Montana Fouts yielded 10 hits and four earned runs while striking out seven. The first meeting between the programs since 2018 had a postseason intensity feel, with two more games still remaining this weekend.

3. No. 5 Oklahoma State has officially hit a rough patch. After last weekend’s loss to Houston and Thursday’s loss to Wichita State, Oklahoma State dropped a 6-5 decision to Kansas City on Friday. That largely erased the good work of an 11-2 win against UTSA earlier in the day. A few losses aren’t the end of the world, even against mid-majors. And the Cowgirls did lose a run on a blatant blown call on a stolen base. But giving up 19 runs in those losses is a head scratcher. It’s worth noting Kelly Maxwell and Carrie Eberle weren’t in the circle for most of those runs. But let’s give some real estate to Kansas City pitcher Mia Hoveland. She faced Oklahoma and Oklahoma State in the span of eight days and lived to tell the tale. Kansas City stuck with her all the way Friday, even as Oklahoma State rallied to score twice in the bottom of the seventh and advance the tying run to third base. Hoveland’s celebration after a strikeout ended the game was as well earned as any in the country Friday.

4. It wasn’t just Plain dealing in the Pac-12. Senior Rachel Garcia struck 14 batters in eight innings while also hitting a home run as UCLA beat Arizona State 2-1 on walk-off double by Aaliyah Jordan at Easton Stadium. Alyssa Garcia was catching for Garcia, who allowed five hits and walked only one batter. In Corvallis, Oregon State junior pitcher Mariah Mazon threw her third no-hitter of the season and hit a home run in a 6-0 victory over Cal. Mazon had seven strikeouts, including two in the final inning, with Bailey McLaughlin behind the plate.

5. Is it too late to qualify for the Olympics? We’re just saying Oklahoma vs. Team USA could be a lot of fun. Taking a break from beating up on the rest of college softball, No. 1 Oklahoma opened a three-game weekend series against Team Mexico. There are a lot of familiar names on the Mexican roster, but clearly the headliner in Norman this weekend is former Sooners All-American Sydney Romero. But even a former Sooners star couldn’t stop the current Sooners. Sydney took the collar against Giselle Juarez, while Grace Lyons hit a home run off Danielle O’Toole to fuel Oklahoma’s 11-0 win.

6. Braxton Burnside wasn’t in the lineup for No. 13 Arkansas when it hosted Mississippi in each team’s SEC opener. Paul Boyd of the Northwest Arkansas Democrat-Gazette reported the official word from Arkansas was she was not feeling well. Burnside played the full game in her team’s surprise loss against Liberty on Tuesday, and Arkansas coach Courtney Deifel tweeted glowing words about her shortstop earlier Friday. So we’ll wait and see about the rest of the weekend. Burnside had started 48 consecutive games for the Razorbacks. The Razorbacks still won, thanks at least in part to the return of Hannah McEwen. Another of the team’s hitting stars had missed 10 games.

7. There are complete games and then there are complete games. Valerie Cagle went all 11 innings in Clemson’s 4-0 win against Louisville on Friday night, striking out a career-best 14 batters and throwing 176 pitches in the process. It marked the first time in her admittedly short college career that she went beyond seven innings. She also made sure she had some breathing room in the bottom of the 11th, driving in one of Clemson’s four runs in the top of the inning.

8. No, the scoreboard isn’t glitching. Texas Tech quietly kept its roll going by sweeping a doubleheader against UTEP. The Red Raiders swept the games by identical 8-0 scores, in each case needing just five innings. Pitchers Erin Edmoundson and Missy Zoch threw matching one-hitters, each striking out six and walking one. Spooky, right? Texas Tech is now 14-8 and working on a seven-game winning streak that includes four consecutive shutouts.

9. Oklahoma is off reconnecting with old friends. Burnside is out. Where do we turn for home runs? Bet you didn’t expect us to say Kansas. But Morgyn Wynne was at it again Friday. Wynne hit two home runs in Kansas’ win against North Dakota State. She now has 10 this season, trailing only Iowa State’s Sami Williams among non-Oklahoma players in the Big 12. The sophomore has hit half of those home runs in the past two weeks.

10. Notre Dame came through with the clutch hits to beat Georgia Tech 5-2 in the ACC series opener. The Fighting Irish were 6 for 11 with two outs, including senior Katie Marino’s game-winning, bases-loaded, three-run double in the top of the seventh inning. Notre Dame’s Abby Sweet finished 3 for 4 to improve her ACC-leading batting average to .561 and increase her streak of games reaching base to 35.

11. The social media matchmaking game brought Auburn and Florida State together when Covid hit two North Carolina-based programs. Auburn head coach Mickey Dean took to Twitter earlier in the week asking if any teams needed a place to play this weekend after an opening emerged in his tournament when Charlotte pulled out because of Covid issues within the program. On Thursday, the ACC series between FSU and North Carolina was postponed because of Covid protocols within the UNC program. That prompted FSU head coach Lonni Alameda’s to post a message on Twitter asking coaches to slide into her DMs if they wanted to play a game. Many people alerted Alameda to Dean’s earlier post, and lo and behold a match was made. Florida State will play two games each on Saturday and Sunday against Auburn and Kennesaw State in the War Eagle Battle in Auburn, Ala.

12. ICYMI from Thursday night … Wichita State registered the highest-ranked win in program history when the Shockers blitzed fifth-ranked Oklahoma State 9-2 to open the Mizuno Classic in Stillwater, Okla. It was the second victory over a ranked opponent this season for Wichita State, which beat then-No. 23 Iowa State on March 7. It was also the second straight upset loss for Oklahoma State after falling to Houston last Saturday. Wichita State then moved one step closer to the Top 25 on Friday. Or maybe two steps closer by sweeping UTSA and Kansas City to remain unbeaten in the Mizuno Classic. Even better, they needed only a cameo save from Bailey Lange in the first game, leaving the ace rested if they want to send her out for a second start against the Cowgirls on Saturday.