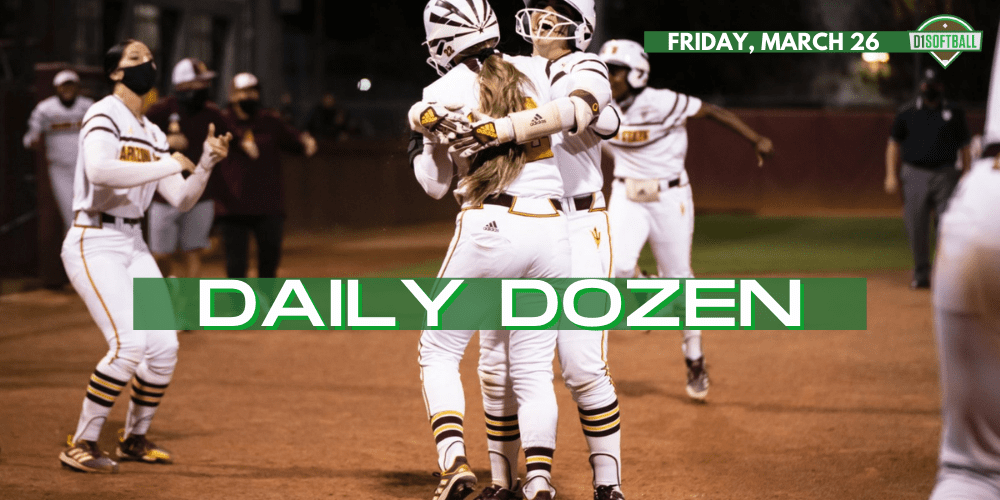 1. Confusion reigned at the end of the Arizona State-Washington series opener in the desert. ASU beat Washington 5-4 when the Sun Devils scored on a wild sequence in the bottom of the seventh inning. ASU’s Kindra Hackbarth got caught in a rundown between third and home while teammate Jazmine Hill was heading to third. Both ended up on third base. UW’s Sis Bates thought she had the inning-ending double play as she chased Hill back to second. But Hackbarth was ruled safe at third, and scampered for home to score once Bates took off after Hill. It capped an ASU comeback from down 4-0 with UW’s Gabbie Plain in the circle.

2. One thing was assured when Duke faced Clemson. A lengthy winning streak would end. In a doubleheader that was as close as expected, the Blue Devils (26-1, 14-1) extended their winning streak to 20 straight by sweeping the host Tigers (20-4, 12-4) and snapping their 17-game winning streak. Duke stayed atop the ACC standings with 2-0 and 3-1 wins. Peyton St. George improved to 11-0 for Duke, escaping a jam by a few feet in the opener when McKenzie Clark’s potential 2-run home run sailed just foul in the fifth inning before she struck out swinging. In the second game, freshman Sarah Goddard drove in the go-ahead run in the sixth with an RBI triple to the gap in right-center – the first extra base hit of her college career and only fifth hit overall. All the runs scored by both teams in the second game came with two outs.

3. In the end, Iowa State didn’t have an answer for Oklahoma’s Jocelyn Alo. No one in college softball does. Alo’s two home runs and five RBIs propelled the Sooners o a 9-7 win against the Cyclones to open Big 12 play. Alo now has home runs in Oklahoma’s last seven NCAA games (the exhibitions against Mexico don’t count). That ties the NCAA record shared by Ohio State’s Alex Bayne, Lipscomb’s Kellie Sirus and former Arizona State All-American and Team USA outfielder Kaitlin Cochran. But Iowa State made the game and the rest of the series interesting by scoring five runs in the bottom of the seventh, capped by Mikayla Ramos’ home run.

4. Julia Cottrill picked a great time to hit the first home run of her college career. The Florida sophomore catcher belted a three-run shot in the sixth inning to break open the game and lead the Gators to a 5-0 victory over LSU. Junior Elizabeth Hightower threw her fifth complete-game shutout of the season and third straight of an SEC opponent. Hightower scattered three hits, struck out three and walked three.

5. Is it possible Jada Cody’s seventh-inning double that tied Wednesday’s game against Florida and paved the way for UCF’s eventual upset win wasn’t her biggest hit of the week? It’s possible after Cody hit a walk-off home run to beat Houston in each team’s American Athletic Conference opener Friday. Let’s compromise and agree that she’s having a heck of a week.

6. The Oregon women’s basketball team may yet make good on the hoopla that accompanied its freshman class, a Sweet 16 game awaiting those Ducks this weekend. But the softball freshmen are stealing the show. Granted, Makenna Kliethermes was around in 2020, but she threw just 6 and 2/3 innings and is still labeled a freshman. She just didn’t pitch like one against Loyola Marymount, throwing her first career no-hitter and striking out 15 batters in a 3-0 win. That clinched a doubleheader sweep for the Ducks, who won 14-2 in the opening game.

7. It only traveled a few feet, but it was enough to help Missouri walk off with a win against Auburn. Cayla Kessinger’s slow roller in the 9th inning with two runners on and two outs led to a throwing error to first by Auburn relief pitcher Lexie Hadley. Casidy Chaumont, who doubled with one out, scored to give Mizzou a 2-1 win. The series opener started with a pitching duel between Jordan Weber and Shelby Lowe. Weber notched a career-high 13 strikeouts in six innings of work – the most by a Mizzou pitcher since 2013 – while Lowe gave up just one earned run in 7.1 innings. Mizzou catcher Hatti Moore continued her hot streak at the plate, homering for the third straight game for the Tigers while also toughing out a shot to the throat on a foul ball behind the plate.

8. A road trip to No. 21 Northwestern isn’t normally appealing for Big Ten batters, but Wisconsin must have been thrilled to be anywhere but the spacious fields that hosted the Big Ten during the league’s two weekends in Florida. And for six innings, Evanston was heaven. Freshman Peyton Bannon even hit her first career home run. But win by the bat, lose by the bat. Northwestern salvaged a 6-5 win on Sydney Supple’s walk-off two-run double. Big Ten teams averaged 3.5 runs per game over two long weekends in Florida.

9. Harper homers were on full display during Arizona’s Pac-12 home opener against Oregon State. Jessie Harper hit her fifth and sixth of the year and No. 81 & 82 of her career tying former Michigan All-American Sierra Romero for ninth all-time.

10. In her first start of the season, Miami’s Courtney Vierstra walked nine and gave up 10 runs against Mississippi State. It’s safe to say things have improved since then. Vierstra’s five-inning perfect game paced Miami’s 9-0 win against Central Michigan on Friday. She struck out seven and, obviously, didn’t walk anyone. She also threw a three-hit shutout against Tennessee earlier in the season. In fact, throw out that first start, and she has a 1.86 ERA and 8-1 record.

11. Kansas hadn’t beaten Oklahoma State since 2015. It won its Big 12 opener once in the same span. It took care of both of those bugaboos in a 7-4 win against the eighth-ranked Cowgirls that continued that team’s up-and-down second half of March. Kansas starter Tatum Goff offered up a resilient complete game, minimizing Oklahoma State’s home runs by keeping runners off base. And the Jayhaws made far fewer miscues than the title contender — along with some web gems like Brittany Jackson’s seventh-inning snag.

12. The odd team out as the rest of the Big 12 began conference play, No. 13 Texas appeared on paper to have an uneventful weekend ahead in hosting the Bevo Classic against South Dakota, UT-Arlington and UT-San Antonio. Instead, the Longhorns trailed South Dakota 5-1 entering the bottom of the sixth inning of Friday’s opener. A five-run rally, capped by Lauren Burke’s rare two-run sacrifice fly saved the day (a stumble in the outfield and aggressive base running made the unusual play possible). On the plus side, Shealyn O’Leary’s five innings of two-hit shutout relief kept the Longhorns in the game long enough to avoid a bad loss.

BONUS: Autumn Gillespie sent the fans home happy in Oxford with a walk-off two-run home run in the bottom of the seventh to lead Ole Miss to a 6-4 victory over Georgia. The Rebels extended their single-season home winning streak to 13 straight.