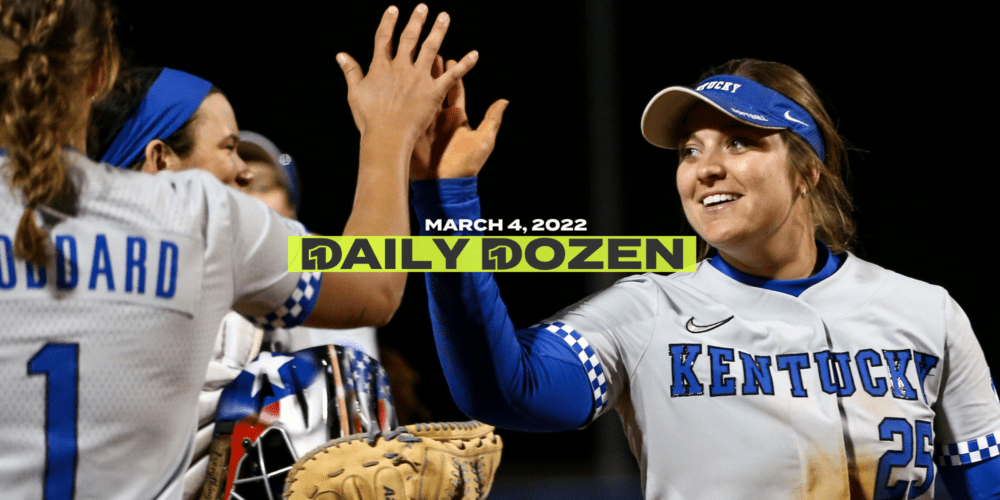 1. Keely Rochard and Virginia took round one on Friday against Clemson. Had you been told that runs were only scored in two innings, you’d probably think Rochard and Valerie Cagle got into a pitcher’s duel in the ACC opener. That wasn’t the case. The Hokies scored six runs in the fourth inning. Virginia Tech opened the frame with three straight singles and a bases-loaded walk. Jayme Bailey delivered the big blow the next at-bat with a grand slam to open things up. Cagle continued to pitch but clearly didn’t have it, surrendering three more singles and another run before finally being pulled without recording an out. The six runs were more than enough for Rochard, who threw 5.2 scoreless innings and allowed only two hits. The two teams continue the series on Saturday at 1 p.m. E.T.

2. Texas did something teams rarely do. The Longhorns hit home runs off Alabama ace Montana Fouts. But Tide freshman Megan Bloodworth had the biggest bomb of the night to help No. 2 Alabama beat Texas 5-4 in the Crimson Classic. Texas hit two two-run home runs against Fouts – a shot by Alyssa Washington in the second inning and a tying homer by Katie Cimusz in the fourth. Bloodworth provided the game-winning run in the sixth with a no-doubt solo shot down the left field line, crossing the plate and giving the Crimson Crane kick celebration pose that has spread from football. Transfers Ally Shipman and Ashley Prange added to the newcomer contributions for the Tide. Shipman was 3-for-3 with two RBIs and Prange had a great double play in which she caught a liner at third and threw off her back foot to double up the runner at first. Fouts went the distance, giving up eight hits and three earned runs while striking out nine. Sophia Simpson took the loss for Texas, allowing seven hits and four earned runs. The teams meet again on Saturday at 3:30 p.m. ET. Alabama doesn’t have pitcher Lexi Kilfoyl available as she remains sidelined by an injured foot.

3. Kelly Maxwell beat Stanford, and Alana Vawter beat No. 9 Oklahoma State. Call it a draw in Stillwater. Still on the other side of the Top 25 fence, the Cardinal are presumably happier about Friday’s split — Oklahoma State winning the opener 6-1, and the Cardinal winning the nightcap 5-1. The opener ended Stanford’s 11-game winning streak, but Sydnee Huff’s leadoff home run against Miranda Elish in the second game helped her team shake it off. Vawter allowed six hits and one earned run in a complete game. It was the program’s best non-conference win since Vawter beat Tennessee in Knoxville a few days before the 2020 season shut down. The Cardinal will eventually need to prove they can win independent of their ace, but for now, proving they can beat a top-10 opponent with her will suffice.

4. Troy knew it was going to play two against LSU on Friday. It didn’t expect to have three chances to celebrate before the nightcap even began. Troy scored its biggest victory of the season in beating No. 22 LSU 5-4, but it was a bit of a wild ride to get there. Troy players twice celebrated the apparent final out — once on a deep fly ball to the wall and once on a strikeout — only to see the joy curtailed by illegal pitch calls against ace Leanna Johnson. No problem, she calmly got the final out (for the third time). It wasn’t just the final inning that was a wild ride for Johnson, who battled brilliantly but walked 11 batters and threw 153 pitches. But after LSU erased a three-run deficit in the bottom of the fifth, Johnson’s teammates had her back with two runs on three singles and some aggressive running in the top of the sixth. The Tigers did come back to win 10-2 in the second game of the day.

5. In the end, Auburn got a 5-0 victory, which is all that really matters. It also got a no-hitter, which is kind of cool. But we can’t help feeling as if Maddie Penta missed out on her opportunity to make history. Penta cruised through the first five innings against NC A&T, striking out 11 of 15 batters and throwing just 64 pitchers. But with the third perfect game in program history up for grabs, Mickey Dean went to KK Dismukes for the final two innings. A physical issue would have been one thing – better safe than sorry. But Penta later came on in relief in Auburn’s second game of the night (she ultimately retired the first 21 batters she faced across the two appearances, striking out 16 of them). It’s a shame Penta didn’t get a chance to do something that only Holly Currie (2005) and Kaylee Carlson (2017) ever did for the Tigers.

6. No. 8 Arkansas hasn’t had a clean weekend yet, dropping at least a game each of the first three attempts — generally against unranked opponents. The Razorbacks still have a chance to get through the Easton Razorback Rumble unscathed, but it was a close call. Trailing Kennesaw State by two runs entering the bottom of the seventh, Arkansas tied the game on a KB Sides single and Taylor Ellsworth two-run home run, a good return on the program’s transfer market investment. That set the stage for Hannah Gammill to come to the plate with a runner on base.

7. For whatever reason, we haven’t seen much of Northwestern’s Lauren Boyd this season. Through the season’s first three weeks, the sophomore had made three starts and totaled just nine inconclusive innings (only two earned runs but seven total runs). But with No. 11 Northwestern one of a dozen or more ranked teams trying to sort out what they have beyond their ace, Boyd came up big with a six-inning one-hitter in Friday’s 8-0 victory against Northern Kentucky. That’s the first time in nearly a year that a Northwestern pitcher other than Danielle Williams didn’t allow a run, earned or otherwise, in a complete game — since March 27, 2021.

8. Ari Carlson can’t stop hitting home runs. An outfielder from Marist High School in Eugene, Ore. tearing up pitching staffs. Now, where have we seen that before? Oregon’s Carlson shares an alma mater with former Alabama All-American Kayla Braud, but not even Braud had a homer binge quite like the one Carlson is on. The third-year outfielder hit two home runs in No. 15 Oregon’s 12-4 victory against Penn State on Friday, a day after she hit a home run in a 10-inning marathon victory against UNC Greensboro. And those came after she hit home runs last weekend at the Mary Nutter Collegiate Classic. That’s five home runs in seven days for a player who entered the Mary Nutter with five home runs in 74 college appearances.

9. The Ivy League waited nearly two years to get back on the field and finally play again this season. Yale waited even longer. The Bulldogs were scheduled to open the season last weekend at the North Texas Classic, but the tournament was canceled due a winter storm in the Dallas area. They headed to warm territory this weekend in San Diego. Yale opened against BYU and UC San Diego on Friday, and lost both games. Before Friday, Yale last took the field on March 8, 2020, a loss to Providence in the Clearwater Spring Break Invitational in Florida.

10. Kentucky is known for having pitchers who can hit and Miranda Stoddard played the part well against Michigan. The junior helped her own cause by belting a grand slam and going the distance in the circle in Kentucky’s 9-2 victory. Stoddard gave up nine hits while striking out three and walking two. She provided all the insurance she would need in the third inning with her two-out grand slam to left center. Kennedy Sullivan gave Kentucky the early lead with a two-run opposite field home run – her second home run of the day  – in the first inning. Michigan’s Meghan Beaubien lasted only two innings, giving up three earned runs on four hits with two walks and no strikeouts. The teams split their two games at the John Cropp Classic, with Michigan winning 8-0 on Thursday night behind a 12-strikeout two-hitter from pitcher Alex Storako.

11. Elon hasn’t been afraid to play bigger programs this season. The Phoenix have faced North Carolina, Duke, Michigan and NC State. They played Duke and NC State close, losing 5-4 and 6-4, respectively, and beat UNC 4-3. On Friday, Elon registered its second win over a Power 5 opponent by taking down Michigan State 2-0. Gabi Schaal drove in both runs and McKenzie Weber threw a four-hit shutout. In the loss, MSU’s Ashley Miller matched her career high with 14 strikeouts.

12. Senior pitchers return. Florida’s Elizabeth Hightower and Arizona’s Hanah Bowen were back in the circle on Friday. Hightower had not appeared in a game since Feb. 18 against Duke. The senior right-hander went 4.0 innings, giving up one hit and one earned run while striking out four and walking three in a 3-1 win over Georgia State. Bowen missed last week’s Mary Nutter Collegiate Classic. She entered Friday’s game for the Wildcats in the top of the fifth inning of an 11-3 run-rule win over Iowa State. Bowen pitched one inning, giving up one walk and striking out two.

BONUS: Stanford wrote KM on wrist tape and wore green ribbons with No. 19 in honor of Katie Meyer, a senior goalkeeper on the Stanford soccer team who was found dead in her on-campus residence on Tuesday. The Santa Clara medical examiner and Meyer’s parents revealed Meyer died by suicide.