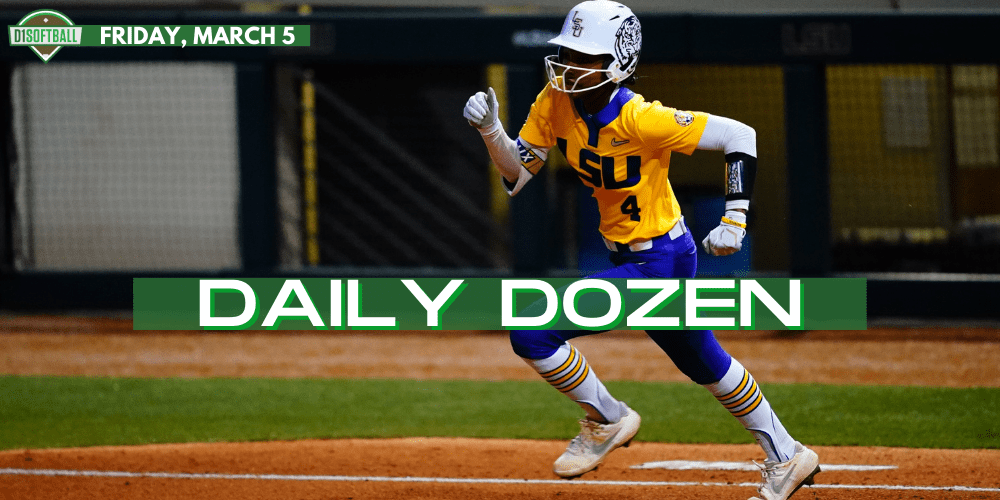 1. Just when things reached a dramatic peak, Mother Nature intervened. No. 8 Texas and No. 11 LSU were locked in a 5-5 tie in the top of the seventh inning when the game was suspended because of rain in Baton Rouge, La. The Longhorns had two runners on base with no outs and were threatening to re-take the lead. LSU had staged a rally from down 5-1 in the sixth inning, tying the game and chasing Texas starter Shea O’Leary. Taylor Tidwell and Ali Newland hit back-to-back home runs for the Tigers and Amanda Doyle evened the score with an RBI single. Friday’s in-progress game will resume at 3 p.m. ET on Saturday, with a previously scheduled doubleheader to follow immediately.

2. The lights out pitching has become nearly automatic for Florida. The Gators just needed someone to spark the offense. Charla Echols and Kendyl Lindaman took care of that by belting home runs to help the Gators (14-0) pull away for a 5-0 win over Florida State. The in-state rivals were locked in a pitching duel until Echols hit a solo home run in the fourth inning and Lindaman belted a 3-run shot in the fifth. That was more than enough for Elizabeth Hightower, who threw a 1-hitter with three strikeouts and three walks. In an eerie coincidence (as noted by Florida Gators Senior Writer Chris Harry), Echols hit a go-ahead home run and Lindaman added an insurance blast the last time these teams met – March 11 of last year, in what turned out to be the final game of the 2020 season before Covid-19 shut down the sports world. Great time to reflect on how far softball has come and how grateful everyone should be to have it back. The rivals complete the home-and-home on Saturday in Tallahassee at 6 p.m. ET.

3. South Dakota State 7, No. 23 Oregon State 0 is a shocking score. But before worrying about the Beavers, do we need to wonder how good the Jackrabbits might be? After upsetting Oregon State, the program’s first win in 11 tries against teams that now reside in the Pac-12, South Dakota State went out and scored 14 in a win against Northern Colorado. Picked to finish second in the Summit League behind perennial favorite North Dakota State, South Dakota State is now 5-1 — the only loss a game against Iowa State that was tied in the sixth inning. And as an added bonus, Cylie Halvorson, who hit two home runs Friday and has done nothing but produce runs since arriving in Brookings, sounds like the lead in a future season of “Fargo.”

4. Carrie Eberle threw the second no-hitter of her career in Oklahoma State’s 8-0, five-inning victory over Omaha. The All-American was just one walk away from a perfect game. Her no-hitter was the second of the season for the Cowgirls, following Kelly Maxwell’s against Texas A&M-Corpus Christi. Maxwell threw a shutout in the other game of the doubleheader sweep, which the Cowgirls also won 8-5 in five innings. It was Maxwell’s seventh straight shutout. She has thrown 29.1 consecutive scoreless innings dating back to last season.

6. Jessica Mullins proved she can thwart more than one potent offense. The right-handed rookie shut down Houston with seven strikeouts, four hits, and one run in a complete-game 6-1 victory. Mullins did not allow a hit until the top of the fifth inning after Kati Ray Brown beat out a throw from third with two outs in the top of the fifth. The offense gave her the early lead scoring three runs in the bottom of the first.

7. Hitting a single walk-off in your career is a feat in itself. A walk-off home run, even more rare. How about hitting two in the same season? North Carolina’s Taylor Greene did just that, in a thrilling eighth inning victory over UConn at home, 3-1.

8. With Ashley Rogers striking out batters at a rate reminiscent of another Tennessee pitcher who hopes to be busy this summer in the Olympics, Kiki Milloy has been able to focus her attention solely on hitting and playing the field. The results are darn good. Milloy hit two more home runs in Tennessee’s 13-1 win against Campbell on Friday. That pushes her total to eight for the season, tied for the most among SEC players until Braxton Burnside reached 10 later in the evening. That’s also already more in 15 games than any Tennessee player hit in the 23 games played in 2020. And it’s nearly as many as anyone but Haley Bearden hit in the full-length 2019 season. The Lady Vols will jump up a level in competition when LSU visits next weekend, but so far, so good.

9. Is Kayla Kowalik the fleetest-footed catcher since Chelsea Bramlett? Her speed helped save the day for No. 14 Kentucky on Thursday. With the game against Illinois State tied in the bottom of the seventh, Kowalik hit an infield single, advanced to second on a bunt and scored on a single and a throwing error. That was the exclamation point on a day that saw her go 4-for-4 with two stolen bases — she has even stolen bases since the start of last weekend (not to mention 12 hits in her last 17 at-bats).

10. Mack Leonard had her hands all over Illinois State’s 3-2 victory over FIU. Leonard hit a walk-off two-run home run in the bottom of the seventh inning and collected her second win in the circle. The junior right-hander gave up five hits and one earned run while working around six walks in 7.0 innings pitched.

11. Fordham waited 670 days to host a softball game again at Bahoshy Field in the Bronx, New York. The Rams made their return dramatic, scoring the final five runs in a 5-4 walk-off victory over Army in their season opener. Sarah Taffet ended the game with an RBI single in the bottom of the seventh to score Brianna Pinto with the winning run. Fordham trailed 4-0 through five innings before mounting the comeback with two runs in the sixth and three in the seventh. Madie Aughinbaugh tied the game with an RBI single to set the stage for Taffet. Fordham waited 361 days to play a game at any location, and the Rams returned in memorable style.

12. If you missed it, Thursday brought what will likely remain one of the week’s eye-catching scores with Baylor going on the road to win an 8-1 rout against No. 12 Louisiana. It was Baylor’s second win in a row against a team ranked at the time, following the previous weekend’s finale against Mississippi State. Gia Rodoni had easily her best outing of the season Thursday against the Ragin’ Cajuns, needing only a modest 109 pitches for her first complete game of the year. Rodoni said it wasn’t until right around this time a year ago that she started to feel like her old self after missing the 2019 season. And as Glenn Moore suggested would be the case, she may again be shaking off the rust and limbering up a body that has absorbed some wear and tear.

BONUS: Someone offer this girl a scholarship (once it’s legal of course #NCAARules). What a catch!