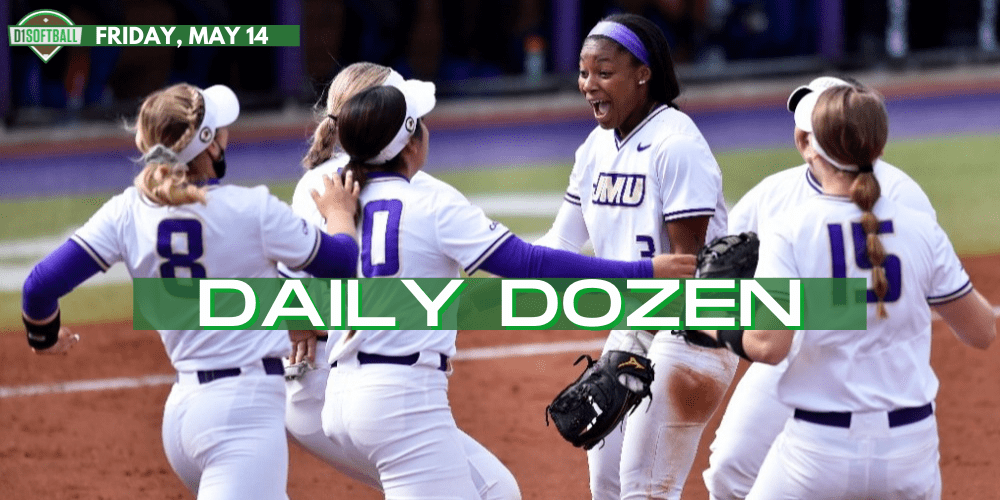 1. Let us know if you’ve heard this one before. Florida rallied for yet another walk-off comeback win. The top-seeded Gators scored two runs in the bottom of the seventh inning to beat No. 4 Missouri 7-6 and advance to the SEC Tournament championship game. Trailing 5-3 in the top of the seventh, Missouri was down to its final strike when Emma Raabe belted a three-run home run to give the Tigers the 6-5 lead. Missouri scored four runs in the seventh to mount the comeback. But the Gators have become the comeback queens this season, with 12 comeback victories, including seven walk-offs. Three of those comebacks have come against Missouri. The Gators benefited from a Missouri error to plate the game-winning run with two outs. The nightcap semifinal was equally entertaining, with Bailey Hemphill belting her program record-setting 61st career home run in the bottom of the sixth inning to lead No. 3 Alabama to a 6-5 win over No. 7 Tennessee. Choosing to rest ace Ashley Rogers after two marathon outings with a bad back and bandaged finger, Tennessee didn’t go down without a fight. The Lady Vols rallied from a three-run deficit to take a 5-4 lead in the sixth inning. They chased Montana Fouts after three straight singles and scored against Lexi Kilfoyl, who was making her first appearance in more than a month following an injury. Fouts re-entered and was dominant down the stretch. After Hemphill’s milestone home run energized the home stadium, Fouts struck out the side in the seventh to set up the second straight Alabama-Florida SEC championship game (6 p.m. ET, ESPN2). The programs met in the most recent tournament in 2019, with Florida emerging with a 2-1 win.

2. Defending champion UCLA clinched the program’s 11th Pac-12 Conference title with a 6-2 victory over Arizona in the opening game of a doubleheader at Hillenbrand Stadium. Megan Faraimo struck out 10 in a complete-game five-hitter. In a second game that didn’t count in the conference standings, Arizona beat UCLA 5-1. The Wildcats became the first team to score multiple runs against UCLA’s Rachel Garcia by plating two against the Olympian. In Northern California, Stanford swept Washington in a doubleheader. The wins were the first for Stanford over UW since 2017, snapping an eight-game losing streak, and gave Jessica Allister her 400th victory as a Division I head coach. Alana Vawter and Maddy Dwyer both threw complete-games for the Cardinal, with Vawter leading Stanford to a 4-1 win in the opener and Dwyer going five innings in an 8-0 run-rule win.

3. It will be the two ACC newcomers playing for the tournament title. Top-seeded Clemson and No. 3 Duke will square off Saturday at noon ET after Clemson eliminated Virginia Tech 2-0 and Duke rallied in the seventh to beat defending champion Florida State 4-3. It marks the first time since 2012 that FSU won’t be appearing in the championship game. Duke mounted a comeback in the top of the seventh inning to beat FSU for the first time in program history, tying the game on an RBI single by Gisele Tapia and taking the lead for good on a sacrifice fly by Kamryn Jackson. The Blue Devils, in their fourth season of existence, will be playing for the title for the first time. Regular-season champion Clemson rode the arm and bat of Valerie Cagle yet again to advance to the final. Cagle outdueled Va Tech ace Keely Rochard and hit a home run to help the Tigers reach the title game in their first full season of softball. Clemson and Duke split the regular-season series, with both winning two games and ending lengthy winning streaks by the other team. Before preparing for the title game, Duke celebrated with ice cream after the historical win over FSU.

4. So Oklahoma State took an interesting route to the Big 12 championship game. The Cowgirls started their day by beating Texas on a walk-off strikeout. Yes, a walk-off strikeout. A dropped third strike with two outs in the bottom of the ninth led to an errant throw into right field. That, in turn, allowed Karli Petty to score all the way from first base. The Cowgirls then beat Iowa State 6-5 in their second game — but only after trailing 3-1 with two outs in the bottom of the seventh. Gifted two extra outs from Cyclones miscues, the Cowgirls tied the game, then took the lead on Alysen Febrey’s home run. (Febrey had her own interesting day after she and Texas’ Janae Jefferson ended up in a verbal standoff after a hard slide at second base.)

5. Like a lot of leagues, it all comes down to one game Saturday in the Big West. The difference is Cal State Fullerton and Long Beach State took a lot longer route to the decisive day. The Big West has no conference tournament, but Long Beach and Fullerton are tied atop the standings at 21-2 after the 49ers swept the Titans in Friday’s doubleheader. They play two more games Saturday, but only the opener counts toward conference standings. Justine Briones couldn’t stop coming up with big hits Friday, delivering the eventual winning run with a sixth-inning triple in the opening game then breaking open the nightcap with a three-run double in the fifth innings. Kellie White pitched complete games in both ends of the doubleheader. Given that both teams are outside the top 80 in RPI, Saturday is essentially an NCAA tournament play-in game.

6. James Madison University was downright dominant in capturing the Colonial Athletic Association tournament title. Top-seeded JMU run-ruled No. 4 Delaware 17-0 in the championship game, scoring 11 runs in the bottom of the first inning. The Dukes (34-1) extended their winning streak to 24 straight games and recorded their program-record seventh consecutive shutout. Kate Gordon was named the Most Outstanding Player of the tournament after finishing 7-for-9 and setting a CAA Tournament record for home runs (6) and RBI (12). Gordon has 67 career home runs, one away from tying the CAA record. In the circle, redshirt senior Odicci Alexander recorded her sixth shutout of the season and sixth straight double-digit strikeout game by fanning 12 of the 17 batters she faced.

7. Friday brought bad news for Illinois State, North Texas, Weber State and Youngstown State. There is always something unfair about a team that earned a title over months of the regular season miss out on the NCAA tournament because of one or two games in a conference tournament. It feels especially cruel this year, with the regular season such a grind because of the pandemic. But those are the rules. And the aforementioned No. 1 seeds were eliminated Friday in the MVC, Conference USA, Big Sky and Horizon, respectively. They join DePaul, Monmouth and Texas Southern as top seeds already eliminated. For North Texas, Weber State and Youngstown State, that’s almost certainly the end of the road.

8. But is it the end of the road for Illinois State after losing to Southern Illinois in the Missouri Valley semifinals? Salukis ace Sarah Harness improve to 21-6 by striking out 14 Redbirds. That puts Southern Illinois (RPI 57) in tomorrow’s final against Northern Iowa (RPI 55) in what, at least in terms of stakes, might be the underrated game of the day. Illinois State entered the weekend No. 52 in RPI but with just one top-50 win (fewer than either Southern Illinois or Northern Iowa). How much more painful now was losing a late 3-1 lead at Kentucky back in March?

9. Addy Bullis really wants to get Dayton to the NCAA tournament for the first time. The Flyers ace didn’t allow an earned run for the second consecutive day in the Atlantic 10 tournament, limiting Fordham to three hits in a 7-1 win. That came after she shut out No. 1 seed George Washington a day earlier. The upshot is that Dayton is a win away from its first NCAA tournament. But the top seed still stands in its way after winning two elimination games. George Washington will need to beat Dayton twice Saturday, but it did sweep the four-game regular season series.

10. Indiana isn’t going to make the NCAA tournament, but darned if Emily Goodin isn’t going out with a fight. Fresh off making the D1Softball All-Big Ten team, Goodin no-hit Maryland to improve to 17-12 with a 1.51 ERA this season. Friday’s gem was the third no-hitter of the super senior’s career. She’s thrown the equivalent of roughly six more complete games than any other pitcher in the Big Ten. She’s also allowed one earned run in her last 56 innings.

11. Alabama State was 15-27 entering the SWAC tournament. It will be 19-27 entering an NCAA tournament regional next week (likely at Alabama or Florida State). The Hornets beat Alcorn State 8-1 in Saturday’s final to reach the NCAA tournament for the second time in a row and the third time in program history (but the first under second-year coach Todd Bradley. Senior pitcher Skyler Sullivan allowed five earned runs in 30 innings in the tournament (including all 11 innings in a semifinal thriller) and Jazmine Dodd drove in five runs in the final two games.

12. San Diego State’s Kathy Van Wyk, all-time winningest coach in the Mountain West Conference and San Diego State history, announced she is retiring. Van Wyk, who enters the weekend with an 805-555-1 record (.592), led the Aztecs to a league-record seven regular-season MWC titles and 11 NCAA tournament appearances, including eight straight trips from 2008-15, in her 25 years at SDSU. Prior to Van Wyk’s inaugural head coaching season in 1997, SDSU had losing records in 18 of its previous 20 years of Division I softball. Under Van Wyk, the Aztecs have compiled a .600 or higher winning percentage in 15 of the last 21 seasons and have been .500 or better in 21 of Van Wyk’s 25 years. As a player at Cal State Fullerton, Van Wyk was one of the top pitchers in the country. She went 35-1 with a 0.18 ERA in 1982. The victories remain a school single-season record and her .972 winning percentage was an NCAA Division I record (30 or more decisions) until 2001 when Arizona’s Jennie Finch went 32-0.