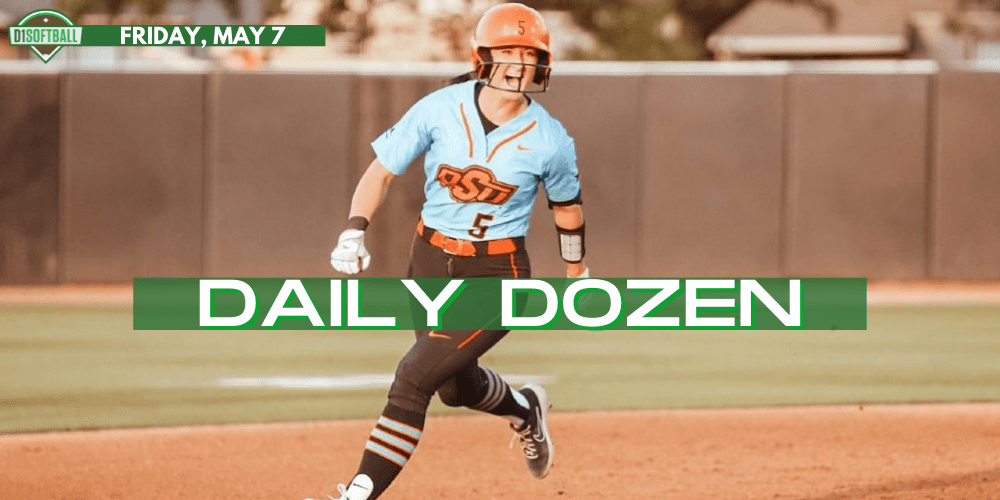 1. Oklahoma broke the program and Big 12 single-season record for home runs Friday. But for once, the Sooners didn’t hit enough home runs. Mostly because they didn’t hit as many of them as Oklahoma State. The Cowgirls rallied from 2-0 and 4-1 deficits to open Bedlam with a 6-4 win against the Sooners, snapping a streak of 24 consecutive losses over the span of a decade in the series. This one was about as good as college softball gets. The Sooners took their early leads on home runs from Jayda Coleman and Jocelyn Alo, who became just the 12th player in NCAA history to reach 80 career home runs. But Oklahoma State’s Reagan Wright and Chyenne Factor answered each of those home runs immediately, and Hayley Busby’s two-run shot forced Giselle Juarez out of the game in the third inning. The Cowgirls added a final run on a Kiley Naomi home run, and Carrie Eberle limited the Sooners to two hits and two walks over the final four innings. Oklahoma’s second loss of the season also puts its one loss from being out of the Big 12 title race.

2. Florida is using every last out this season to pull out dramatic victories. For the second straight week, the Gators staged a comeback in the final inning that was capped by a clutch 3-run home run. In the series opener against Texas A&M on Friday in Gainesville, Charla Echols hit a walk-off 3-run home run to beat the Aggies 5-3 and keep Florida’s SEC title hopes alive (one of many dramatic walk-offs that kicked off the weekend). The Gators need to sweep A&M to share the SEC title with Arkansas. It was looking grim entering the seventh until the Florida rally magic was sparked again. Last weekend, Hannah Adams hit a 3-run in the top of the seventh as the Gators rallied to beat Missouri 3-2.

3. Hanah Bowen was nearly perfect on Friday night at the Jane in Eugene until Oregon’s Terra McGowan stunned the Wildcats with a two-run walk-off home run. Bowen entered the bottom of the seventh just three outs away from a perfect game. The Ducks had other plans. Haley Cruse went deep in the count to muscle a 3-2 pitch off the plate to right for Oregon’s first hit and base runner of the game. Allee Bunker gave herself up via a sacrifice bunt to bring up McGowan. The junior catcher belted an 0-2 inside pitch to left field to secure the 2-1 walk-off win. (More to come on the Pacific Northwest pitcher’s duel in Tara’s Take)

4. The history of women’s sports programs at Clemson dates back to the mid-1970s. The history of the Clemson softball program dates back to last year. But the Tigers are wasting no time making their mark in the record books. Clemson beat Syracuse 4-2 to extend its winning streak to 18 games – the longest by any women’s program in school history. That’s on top of a 17-game winning streak the Tigers had earlier this season. Syracuse managed to make some history of its own. The Orange hit two home runs against Clemson freshman ace Valerie Cagle. It was the first time in 51 career appearances, including 29 prior complete games, that Cagle had surrendered two home runs in a single game. But Cagle otherwise had a Cagle performance. She struck out 10 batters and was 2 for 3 to extend her hitting streak to 18 straight games. the Tigers (38-4, 27-4) were able to scratch across four runs to move closer to capturing the Atlantic Coast Conference title in their first full season of existence.

5. Speaking of Clemson’s title hopes … the Tigers can send some flowers to Pitt today after the Panthers rallied to beat Florida State (36-9-1, 24-5-1) on a two-run walk-off home run by freshman Cami Compson in the bottom of the seventh. Pitt mounted a comeback from an early 4-0 deficit to hand the Seminoles the 5-4 loss and give Pitt’s ACC Tournament chances an added boost.

6. Meghan Beaubien and Alex Storako combined (again) on a shutout, with Storako striking out all six batters she faced in Michigan’s 3-0 win against Minnesota. That’s 28 strikeouts in 11 innings this week for Storako. The win means Michigan will control its own fate in the Big Ten regardless of what happens the rest of this series (Michigan can finish the series no worse than 30-8, while Minnesota can finish it no better than 28-8). Lou Allan and Julia Jimenez hit home runs for Michigan.

7. Duke will have to wait for its first ACC title, but a program that hasn’t been around much longer than Clemson looked ready Friday for its first NCAA tournament. The Blue Devils hit a program-record four home runs – all in the first inning – and Shelby Walters and Claire Davidson combined on a five-inning no-hitter in a 10-0 win against NC State. Duke’s four home runs were the most in a single inning in school history and tied the single-game record. The no-hitter was the second in program history.

8. Mariah Mazon held Arizona State’s prolific offense in check. The Oregon State ace limited the Sun Devils to just three hits and no runs as the Beavers opened the series with a 1-0 win in Corvallis. Mazon struck out seven batters while walking two to outduel Allison Royalty. ASU’s freshman gave up four hits and no earned runs with two strikeouts in six innings.

9. Illinois and Ohio State swapped a single game for a doubleheader Friday because of forecasts for a rainy Sunday across the Midwest. But changing the schedule may not have prevented the bubble from bursting on the Illini. The Buckeyes swept the Illini by 12-0 and 5-1 margins, respectively. The opening win featured an 11-run fourth inning, while Sam Hackenbracht took the Big Ten led with her 11th home run this season. Just 6-8 at home and buried in the RPI, Illinois must likely now reconcile itself to missing the postseason.

10. Louisiana got a key addition back in the lineup on Thursday night when senior shortstop Alissa Dalton made her first appearance since April 3. Dalton missed 16 straight games with a hand injury. Dalton was 0 for 3 with 2 RBIs in the opening game of the series against University of Louisiana-Monroe and 0 for 2 in Game 2, which Louisiana rallied to win 8-6 behind a grand slam from Justice Milz. The Ragin’ Cajuns have won a nation-leading 64 straight series in the Sun Belt dating back to March 2013.

11. “Tonight coach announced to the team that they had officially won the WCC,” is not exactly the way anyone expects to clinch a title. But it’s the way BYU did after sweeping Santa Clara in a Friday doubleheader. After Pacific announced this week that it would not play its final two WCC series, due to COVID-related concerns, the WCC said the conference would be unable to complete a full schedule. Instead, they relied on the Ken Pomeroy adjusted conference winning percentage to crown a champion (the league never planned to have a conference tournament).

12. Middle Tennessee State’s Amber Baldwin has another season of college softball if she wants it. But the fourth-year pitcher, who will go through Senior Day ceremonies Sunday, opened what could be her final home series in impressive fashion. It took Middle Tennessee State 13 innings to earn a 1-0 win against FIU, and Baldwin pitched every one of them. She faced 45 batters to get her shutout and threw 155 pitches. It was her third marathon outing of the season, following a pair of 10-inning performances earlier. Another fourth-year player, Ryan King, delivered the walk-off hit in the program’s longest game since 2006.