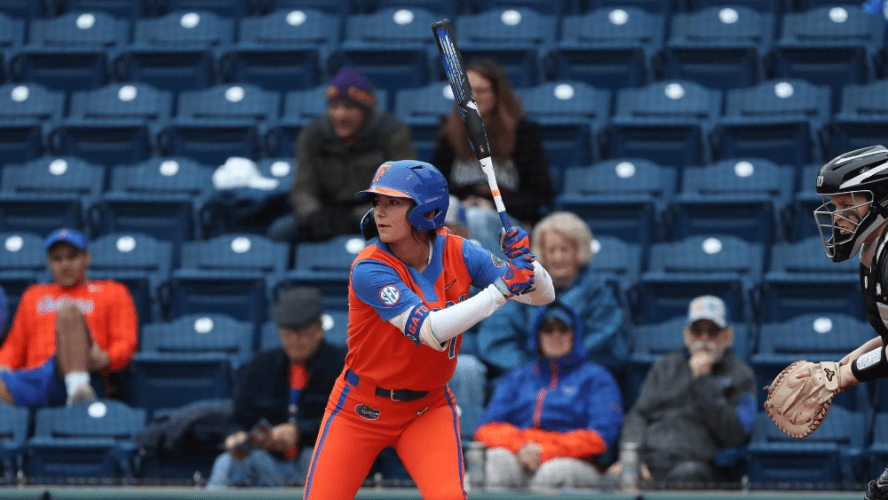 From no-hitters to grand slams, Rhiannon Potkey and Tara Henry bring you the 12 things that stood out on Friday, Feb. 21st.

1. Texas A&M-Corpus Christi batters had absolutely no hope against University of North Texas pitcher Hope Trautwein. The junior right-hander struck out a record 21 batters in a 3-0 victory over the Islanders in eight innings. Trautwein’s 21 strikeouts was a single-game Conference USA record. The prodigious total boosted Trautwein’s career strikeout total to over 400, becoming the third Mean Green pitcher to reach the milestone.

3. On the flip side of the no-hitters, grand slams were also flying out of the park. Kentucky had two, with Mallory Peyton hitting a grand slam against Georgia Tech and Lauren Johnson hitting one against Samford. JMU had two, with Michelle Sullivan hitting one against Austin Peay and Madison Naujokas following with a grand slam against Georgia. A few of the other hitters adding grand slams to their stats: Cal’s Candace Yingling against Auburn, Western Kentucky’s Kennedy Sullivan against Green Bay, Bryant’s Gabrielle Ermish against Georgia State, Ball State’s Stacy Payton against Indiana State, Kansas’ Morgan Wynne against Rutgers, South Dakota’s Jordyn Pender against Georgetown, Minnesota’s Natalie DenHartog against Tulsa, UTSA’s Taylor Medina against Kansas, North Dakota’s Jocelyn Kirk against Boise State, LSU’s Morgan Cummins against Sam Houston State, Evansville’s Jenna Lis against Georgia Southern.

T7 | GRAND SLAM! Taylor Medina knocks it out of the park as the Roadrunners take the lead.

4. Another walk-off for Kelley Lynch. The freshman blasted a two-run home run in the bottom of the seventh as Washington defeated Wisconsin at the Mary Nutter Classic. Gabbie Plain (6-1) went the distance for the Huskies punching out 15, tying her career high. Washington moves to 12-1 on the season.

5. After striking out 15 times and being no-hit by Seattle’s Smith earlier in the day, UC Davis bounced back in a big way at the Mary Nutter Classic. The Aggies scored eight runs in the fifth inning on their way to an 11-3 run-rule victory over No. 15 Missouri in six innings. UC Davis trailed 3-0 before exploding for nine hits in the fifth sparked by Marissa Jauregui’s leadoff double.

6. Ole Miss doubled its win total in one day at the Blazer Classic. The Rebels (4-8) upset No. 8 Oklahoma State 8-5 in the opener and then beat host UAB 5-0. The Rebels entered the day without a batter hitting over .300, but their offense produced to extend the team’s confidence-boosting winning streak to three straight.

7. Texas State (8-3) beat No. 16 Minnesota 3-2 in its opening game at the Baylor Invitational. The Bobcats had a chance for their third win over Power 5 program this season, but only managed one hit in a 1-0 loss to Illinois. Texas State’s only other losses are against Kentucky and Auburn.

8. Doubles to left-centerfield kept South Carolina’s tournament success streak alive. The Gamecocks rallied to beat Boston College 3-2 in eight innings to improve to 25-0 over the past six years at the Gamecock Invitational. The Gamecocks were down to their final outs in the bottom of the seventh before Lauren Stewart doubled to left-center to score Kenzi Maguire and tie the game 2-2. An inning later, Katie Prebble hit a walk-off double to the gap in left-center to give Carolina the win. The news wasn’t all good for the Gamecocks. Junior ace Kelsey Oh departed in the first inning after appearing to suffer an injury mid-pitch..

9. UCF (10-2) beat No. 18 Tennessee 10-1 in five innings, handing the Lady Vols their first loss to an unranked team in preseason play since 2018. UCF scored nine runs in the third inning to take control, highlighted by Jada Cody’s 3-run home run. Cody finished 2 for 3 with three runs scored and three RBIs. UCF’s only losses this season are to No. 5 Washington and Duke. UCF and Tennessee meet again on Saturday morning at 9 ET. There was a bright spot Friday for the Lady Vols. Chelsea Seggern recorded a career-high seven RBIs in Tennessee’s 9-1 opening victory over FIU in six innings. The senior shortstop had a three-run home run, a two-run home run, an RBI double and a walk-off RBI single.

10. Teams that win by run-rule usually don’t surrender 11 runs. But that is how crazy’s Georgia’s win over JMU was. After falling behind 6-0 in the second inning, the Bulldogs rallied to beat JMU 19-11 in five innings. Georgia scored 10 runs in the fifth inning.

11. Florida (13-1) upset No. 4 Arizona in a back and forth game at ‘Wrigley Field’ at the Mary Nutter Classic, winning its first game against a Top 25 team. Charla Echols and Hannah Adams both homered for the Gators. Rylee Trlicek kept the Arizona bats quiet through six giving way to Natalie Lugo, who picked up the save for the Gators.

12. Notre Dame’s Katie Marino hit a lead-off home run for the second straight day with a shot against Seattle.

SHE DID IT AGAIN

Katie Marino slams the leadoff homer for the second game in as many days!

ICYMI: The Pitching Ninja loves softball. He breaks down Miranda Elish with the help of our pitching analyst, Nyree White.