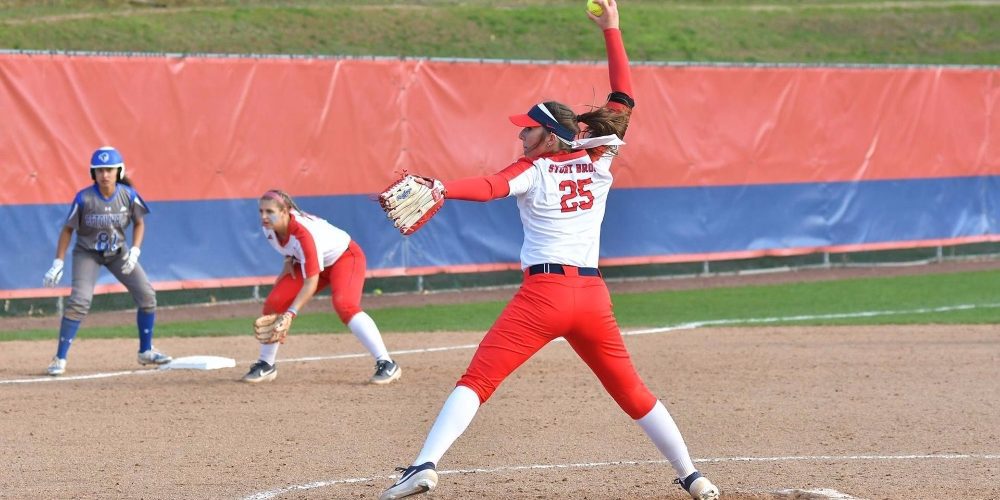 Multiple Top 10 showdowns, more upsets and twin home runs are just a few of the highlights from Friday. Rhiannon Potkey and Tara Henry get you caught up in the Daily Dozen:

1. Talk about a Texas two step. All the No. 3 Longhorns did to start their Southern California swing was beat No. 1 UCLA and No. 2 Washington in back-to-back days. After handing the Bruins their first loss on Thursday in a non-conference game, Texas beat UW 8-6 at the Judi Garman Classic. The Longhorns used three pitchers in victory over UW, with Courtney Day picking up her fourth win of the season. Lauren Burke was 3-for-4 with a double, home run, two runs scored and three RBIs.

For the first time in UT history, No. 3⃣ Texas softball has beaten the top two teams in the country in back-to-back games as the Longhorns knock off No. 2⃣ Washington, 8-6!

2. Sis Bates returned to the lineup for UW just in time for showdowns with No. 4 LSU and No. 3 Texas.  The All-American senior shortstop had missed the last two weekends of tournaments while in concussion protocol. Bates finished 2 for 3 with a walk as UW took advantage of throwing errors to beat LSU 3-1 in a game that was scoreless through four innings.

3. Arizona senior Mariah Lopez and Alabama freshman Lexi Kilfoyl engaged in a pitching duel at the Easton Crimson Classic. Alyssa Palomino-Cardoza’s go-ahead RBI in the seventh was the difference as No. 2 Arizona beat No. 10 Alabama 2-1 at Rhoads Stadium in Tuscaloosa. Lopez gave up seven hits while striking out nine and walking one. Kilfoyl allowed one earned run on four hits while striking out seven and walking five.

4. No. 9 Florida used strong defense and the bats of Kendyl Lindaman and Charla Echols to defeat No. 7 Louisiana 6-0 in the opening game of a three-game non-conference series at Katie Seashole Pressly Stadium in Gainesville, Fla. The Gators turned three double plays and left fielder Cheyenne Lindsey threw out a runner at home plate. Lindaman crushed a solo home run in the fifth inning and Echols was 3 for 4 with two RBIs to hand Louisiana’s Megan Kleist (5-4) the loss.

5. Villanova pulled off the upset with a 7-3 victory over No. 24 Baylor at the Wooo Pig Classic in Fayetteville, Ark. Baylor was coming off victories over No. 8 Florida State and No. 23 Arkansas to open the tournament.

6. Two undefeated teams remain after Oregon (16-0) and Stony Brook (6-0) won their games on Friday. No. 1 UCLA dropped from the ranks of the unbeaten after suffering an extra-inning home loss to Texas on Thursday night. Stony Brook took down Akron 4-1 at the North Florida Challenge and Oregon beat Drake 12-1 and Tulsa 3-2 at the Tulsa/OSU Invitational. The Ducks face No. 11 Oklahoma State on Saturday at 6 p.m. ET

7. After upsetting LSU to open the Judi Garman Classic on Thursday, LMU took down another Power 5 program by beating Michigan 2-1. The loss prolongs the struggles for Michigan, which has lost four straight since starting 10-0. It doesn’t get any easier for the Wolverines. They face No. 3 Texas, No. 22 Texas Tech and No. 2 Washington in the next three games.

A special win for a special coach❤️️

9. Atlantic Coast Conference play opened for some members this weekend. Notre Dame beat Duke 6-2 in the first game of a three-game weekend series in Durham, N.C. The Irish gave head coach Deanna Gumpf her 750th career win. Other ACC-opening winners: Pittsburgh beat North Carolina 7-3 on the road for UNC’s sixth straight loss. Clemson rallied from a three-run deficit to beat Virginia 8-7 on a walk-off solo home run by Valerie Cagle in the bottom of the seventh.

10. It was a good day for Amber and Autumn Bishop. The senior twins tallied home runs and milestones to help Liberty sweep two games at the Liberty Softball Classic. Amber hit a three-run home run in the opening game against Hofstra to set the program record for hits at 250. Amber is the active NCAA Division I leader in hits. In the win over Penn, Amber and Autumn homered in the same game for the fourth time. Autumn hit a grand slam and Amber hit a solo shot.

11. North Alabama senior pitcher Megan Garst threw a one-hitter with a career-high 15 strikeouts in a 9-0, five-inning victory over Northern Illinois. Garst struck out the first 14 batters she faced before allowing a two-out single in the top of the fifth inning to break up the perfect game. Garst struck out the next batter to improve to 4-3 this season.

12. Furman senior Tess Griswold hit a three-run, walk-off home run in the bottom of the seventh as the Paladins rallied to beat Harvard 6-5 at the Gardner-Webb Red and Black Tournament. Furman trailed 5-2 entering the seventh before Riley Ludlam’s sacrifice fly brought home a run. Griswold ended the game on a 1-2 pitch sent over the left-center field fence.

Bonus: The Sun Devils are second in the nation in home runs (25). Maddi Hackbarth adds some flair to #24