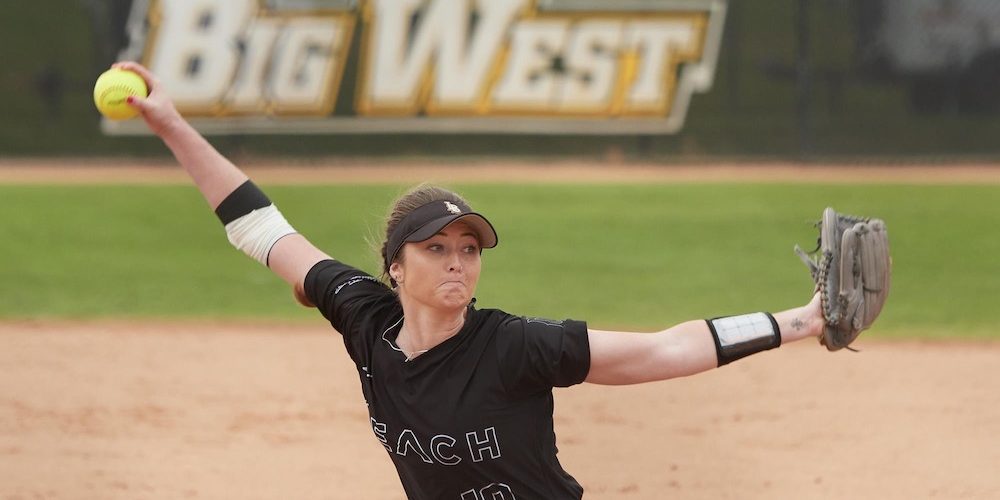 Clutch hits, comebacks, walk-offs, extra innings – fans were treated to all of those and more on Saturday. Rhiannon Potkey and Tara Henry get you caught up in the Daily Dozen:

1. Long Beach State sprung the biggest upset of the weekend so far, scoring four runs with two outs in the bottom of the seventh to beat No. 4 Oklahoma 5-4 at the Hillenbrand Invitational in Arizona. Alyssa Gonzalez hit a two-run walk-0ff double to score Naomi Hernandez and Sydney McCollum and launch the celebration for the Beach. Kellie White went the distance to earn the win, allowing five hits. Shannon Saile took the loss for Oklahoma, giving up three hits, three walks and one earned run in 2.1 innings.

Long Beach State stuns No. 2 Oklahoma with four runs in the bottom of the seventh!#NCAASoftball | 🎥 @LBSUSoftball pic.twitter.com/OosBoR7QkP

2. Oklahoma bounced back with a victory over No. 3 Arizona in extra innings. Mariah Lopez (6-1) suffered her first loss of the season against her former team. The Sooners scored two runs on a fielding error in the top of the 10th inning to defeat the Wildcats in front of a sold out crowd of 3,006.

3. Missouri’s grit was on full display yet again with another comeback win. The No. 16 Tigers rallied from a 5-0 deficit to beat Virginia Tech 6-5. The rally was sparked by Cayla Kessinger’s three-run home run in the fifth, and Brooke Wilmes drove in Hannah MacGivern with the game-winning run in the sixth. But Missouri finally ran out of comebacks in a thrilling nightcap as JMU handed the Tigers (9-1) their first loss of the season on a walk-off sacrifice fly in the bottom of the 8th for an 8-7 win.

4. The lights went out Clearwater. No. 2 Washington beat South Carolina in a bizarre late night contest at the St. Pete Clearwater Elite Invitational. In the bottom of the 5th, Washington’s Sami Reynolds grounded out to shortstop Kenzi Maguire who fielded the ball in the dark. The Huskies filed an official protest, the Gamecocks started a dance party. It was wild. Washington gets the win, 5-4.

Lights out. Party on. pic.twitter.com/XUnW6DYEkp

5. Round 1 of the in-state rivalry went to the Ragin’ Cajuns as No. 12 Louisiana beat No. 7 LSU 2-1 to hand LSU (6-1) its first loss of the season in front of a Lamson Park record crowd of 3,107. Megan Kleist outdueled Maribeth Gorusch to pick up the win for Louisiana (7-1). Kleist gave up four hits with five strikeouts. All the runs were scored in the second inning. The teams meet again on Sunday in Baton Rouge.

7. Kansas had a challenging schedule in Clearwater, but finished on a high note. After playing No. 24 Northwestern tough in the morning, the Jayhawks beat JMU 12-2 for their second win of the season. Kansas failed to score a run on the first two days of the tournament and were outscored 29-0. But the Jayhawks scored 16 on Saturday.

8. No. 24 Northwestern had a famous alum watching as the Wildcats beat No. 5 Florida State 6-2. Philadelphia Phillies manager Joe Girardi was in the crowd, with the organization’s spring training facility only a short drive away. Girardi met with the Northwestern players and coaches after the big win.

No better way to celebrate a top-5 win.

9. UCLA. The No.1 ranked team is 9-0 and looking more polished than ever. The Bruins picked up two more wins over Liberty and Georgia scoring 17 runs on the day. Maya Brady, Briana Perez, and Seneca Curo are tied on the season for runs batted in, 12. Jenavee Peres hit another bomb. 2. UCLA is one of four undefeated teams remaining along with Texas, Michigan and Oregon.

10. Clemson’s history in its stadium isn’t very long, but the Tigers likely set a few records that will last. The first-year program beat Maryland 21-2 in five innings in the ACC-Big Ten Challenge. Clemson scored 14 runs in the second inning alone, with junior Bailey Taylor and freshman Valerie Cagle each hitting grand slams. Cagle added a three-run shot in the third inning to finish the day 4 for 5 with 8 RBIs. Clemson had 18 hits and 20 RBIs overall.

11. No. 5 Florida State suffered its third straight loss when Northwestern downed the Seminoles. Making matters worse for FSU, catcher Anna Shelnutt left the game after taking a foul ball off her face during an at-bat.

12. In a fitting end to the night, Arizona State outlasted Kentucky 7-5 in 11 innings behind a two-run walk-off home run by Alli Tatnall. ASU (8-2) rallied from a 4-1 deficit to beat Kentucky (6-2) for the second straight night in the Littlewood Classic in Tempe.

.@keeeks03 TIES IT! A triple brings in a run and we're tied 1-1 in the bottom of the 7th with the winning run in scoring position. 🔥 #OnTheBoat pic.twitter.com/R2jsZMkUso