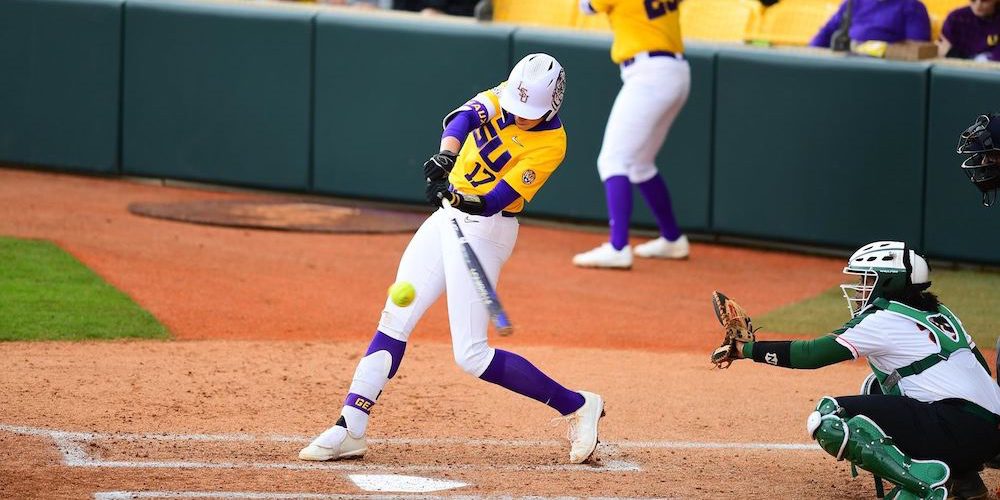 Pitching records, rivalry games and tournament titles.  Get caught up on those and more from Rhiannon Potkey and Tara Henry in Sunday’s Daily Dozen:

1. UCLA and Florida State garnered the primetime spotlight on ESPN2 with a matchup between the last two NCAA champions to close out the St. Pete Clearwater Elite Invitational. The game lived up to the hype, and had a postseason feel from the start. Aaliyah Jordan scorched a two-run double with two outs in the top of the seventh inning to lead No. 1 UCLA to a 3-2 victory over the No. 5 Seminoles. UCLA (11-0) entered the game averaging 9.9 runs per game, but FSU (7-4) held the Bruins in check until Jordan unleashed a shot that sent FSU leftfielder Kaley Mudge crashing into the outfield wall on an admirable attempt for the final out that dropped out of her glove.

2. No. 7 LSU didn’t have to wait long to get revenge on No. 12 Louisiana. The in-state rivals met for the second straight day in the LSU Invitational, with the Tigers beating the Ragin’ Cajuns 4-3 at Tiger Park in Baton Rouge. Morgan Cummins doubled to score Akiya Thymes with the game-winning run in the sixth inning as the programs each won on their home field to split the series.

3. Host Baylor swept through the Getterman Classic to capture the title on Sunday. The Bears defeated Prairie View A&M 8-3 in the championship game. Baylor pitcher Gia Rodoni picked up the win to improve to 4-1 in her return after sitting out last season with an injury. Rodoni had 16 strikeouts in a 2-1 eight-inning victory over Western Illinois on Saturday.

4. Pitchers who can rake are the best kind of pitchers. Seeking her first win of the season, USF junior Georgina Corrick took things into her own hands. With the game against No. 18 Georgia knotted at 0-0 in the 7th inning, Corrick hit a two-run home run to left center for the first home run of her career. The second-team All-American then closed the door on her three-hit shutout in the circle to lead the Bulls to a 2-0 win. Corrick finished with nine strikeouts and no walks.

5. Raeanne Geffert had a weekend to remember. The senior set three Bucknell career pitching records with the most wins (52), strikeouts (505) and innings pitched (579.2). Geffert had four double-digit strikeout games during the weekend at the Campbell Invitational, including a career-high 16 against Mount St. Mary’s on Saturday.

6. Senior Alyssa Denham registered her second career no-hitter to lead Arizona to a 6-0 victory over Long Beach State to close out the Hillenbrand Invitational. Denham allowed just two baserunners and finished with seven strikeouts and one walk.

7. The Atlantic Coast Conference won the Big Ten-ACC Challenge for the third time in four years. This year’s 25-19 result was the closest margin in the event’s five-year history. Duke and Clemson each went 4-0 in Challenge matchups.

8. Kayla Konwent’s big day at the plate led Wisconsin to a big win over North Carolina. The junior hit two home runs, including a grand slam, as the Badgers beat the Tar Heels 8-3 in Chapel Hill.

She cranks her second one out of the park today for a GRAND SLAM.

9. There is always a chance a game may not count on the final day of a tournament because teams need to travel home. The South Carolina-JMU game in Clearwater was stopped in the bottom of the fourth inning with South Carolina leading 6-3. Kentucky made it with 11 minutes to spare before the drop-dead time in its 15-3 victory over Detroit in Tempe, Arizona.

11. The USA Softball Olympic team played only two of its three scheduled games at the St. Pete Clearwater Elite Invitational as part of the Stand Beside Her Tour. Team USA beat Liberty 18-0 in five innings last Thursday. The Americans beat Oklahoma State 4-0 on Sunday morning behind Monica Abbott’s no-hitter. But the team’s afternoon game against Washington was canceled because of time constraints. UW’s game against Texas Tech went extra innings, and UW and Team USA had to travel. Team USA returns to action on Tuesday against Arizona.

Just a bit star struck, but can you really blame us? 🤩#Pitch2Pitch | #okstate pic.twitter.com/hsdb6XFrod

12. Speaking of Washington, the No. 2 Huskies finished 4-1 in Clearwater despite the absence of senior All-American shortstop Sis Bates (undisclosed DNPs). After a late night at the field on Saturday that included a 25-minute delay because the lights went out, the Huskies returned at 10 a.m. for another crazy comeback win. They beat Texas Tech 11-5 in eight innings, scoring the final eight runs to rally from a 5-3 deficit. Bates made an appearance in the dugout to watch her teammates, wearing sunglasses and earplugs.

Bonus: Jayda Alaan flashing some leather for the Gaels at the Bulldog Classic

How about this 2 out diving catch to save a couple runs by SS Jayda Alaan! #SCtop10 #FloSoftball #NCAASoftball @NCAAsoftball @WCCsports pic.twitter.com/KDi464Ujf4