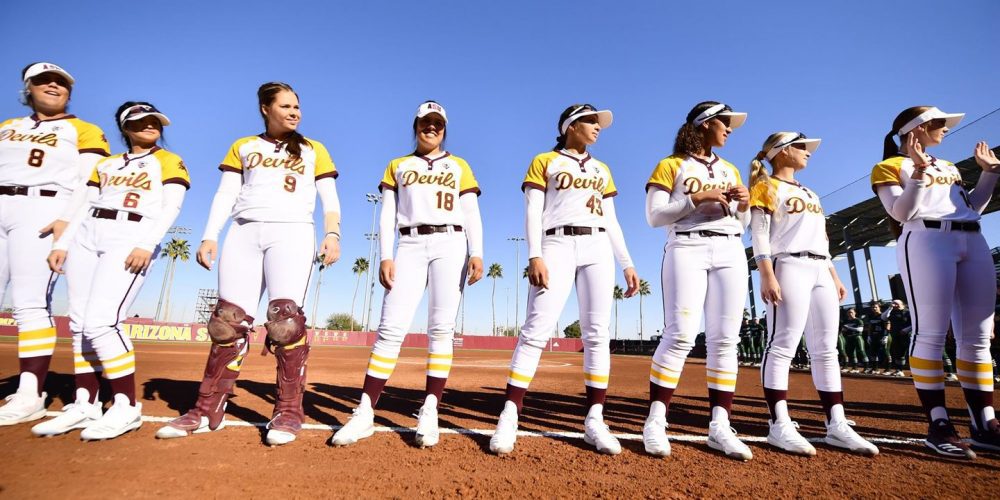 Perfect games, series clinchers, tournament titles – all of that and more as Rhiannon Potkey and Tara Henry highlight 12 things that happened on Sunday in the Daily Dozen:

1. Perfection was a theme in the circle this weekend. Texas two-way star Miranda Elish added to the total on Sunday by throwing the second perfect game of her career in a 7-0 win over New Mexico at the Texas Invitational. The senior had 10 strikeouts in the 11th perfect game in Texas program history. Elish’s other perfect game came while she was at Oregon and the Ducks beat Portland State.

Among the other perfect games around the country in Division I in the last three days:

3. The Sun Devils are on a boat, a boat full of home runs. Arizona State became the new NCAA Softball home run leaders this weekend reaching 40 on Friday against Wright State. Finishing off the weekend in style, the Sun Devils blasted five homers in the final two games of their tournament.

4. The opening weekend of SEC is nearly complete. Kentucky and Texas A&M play Game 3 of their series on Monday at 7 p.m. ET (and make sure to tune in because UK head coach Rachel Lawson will be mic’d up for the SEC Network). The home teams dominated the series-wrapping final games on Sunday.

5. Winning Streaks: Oklahoma State and Eastern Kentucky are on a roll.

6. Mississippi State junior Annie Willis flummoxed batters all weekend. The reigning SEC co-Pitcher of the Week struck out 12 batters in 6.2 IP on Sunday as MSU captured its fourth tournament title of the regular season with a 2-0 win over Southeast Missouri at Nusz Park. On Friday, Willis threw the 22nd no-hitter in program history while striking out a school-record 19 batters in a victory over Mississippi Valley State.

Pitching is that much easier with someone like @madisynk18 behind you!

7. Duke’s Brianna Butler set a program record with 14 strikeouts in a 4-1 win over Gardner-Webb. Butler threw a one-hitter in the opening game of a sweep over Gardner-Webb as the Blue Devils finished 5-0 at the Duke Invitational.

8. Fresno State used a 14 strikeout performance from Hailey Dolcini and a three-run home run from Schuylar Broussard to beat UC Davis 3-2 and improve to 15-0 at home.

9. North Texas tied a program record with six home runs in an 11-3 victory over host UTSA. Tayla Evans and Katie Clark each finished with two home runs as the Mean Green won the rubber match of the Conference USA-opening series.

North Texas has tied the program record for home runs in a game with SIX!

Grahmann will pinch hit with one away!

10. Tennessee captured its own tournament title with a 5-0 victory over Stanford in the championship game. Freshman Callie Turner threw a four-hitter as the Lady Vols recorded their first shutout of the season. Sophomore catcher Ally Shipman finished with a career-high four hits, including a home run and a double. Shipman finished the tournament going 12-for-16 with four extra base hits and six RBIs.

11. Oregon’s Deijah Pangilinan hit a walk-off sacrifice fly in the eighth inning to lead the Ducks to a 3-2 victory over Seattle at the weather-impacted Oregon Tournament. Brooke Yanez recorded 11 strikeouts with two earned runs and five hits in 7.0 IP. Samaria Diaz earned the win in 1.0 inning of hitless relief.

12. Due to Minnesota having to travel, the game between the Gophers and UCF finished in a 5-5 tie in the ninth inning at the UCLA/Long Beach Tournament. The bottom half of the inning wasn’t played because Minnesota had to catch a flight to Hawaii to play Hawaii during spring break. UCF got to stick around SoCal and indulge in a post-game meal of tacos provided by Justene Molina’s family.

Bonus: The U.S. Women’s National Team returned to action on International Women’s Day at another stop on the Stand Beside Her Tour in front of  2,487 people in Irvine, Calif. In their first contest of the day, Team USA defeated Cal State San Marcos 9-3 before notching a 9-2 win over UC San Diego in their exhibition doubleheader.

There’s absolutely nothing better than to look up in the stands and see the future of the sport standing alongside us.

Choose to stand beside HER – not just today but everyday 🇺🇸#StandBesideHerTour | #InternationalWomensDay pic.twitter.com/50XlbhEDEJ